The Mini Wars or the debate over WHO invented the miniskirt and the wrap dress is heating up again. Who did what and when did they do it, has come to the attention of the fashionistas in my new book, It's all about the Dress as I describe Mia-Vicky's beginnings in the early sixties. I write that we designed and wore the mini skirt and the popular wrap dress years before the designers who later claimed their invention. 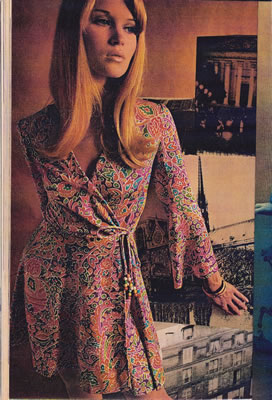 With my partner, Mia Fonssagrives (daughter of Lisa Fonssagrives, top model and stepdaughter of photographer Irving Penn ), I left Parsons School of Design in New York for Paris in May 1964. Wearing our own designs, dresses and coats, often in leather and suede, always worn three to four inches above the knee, and worn with printed tights and matching T Shirts, we made the world press by July of 1964. Paris fashion photographers couldn't get enough... I have always been awarded singular credit for inventing hot pants and beaded lace bras worn on the street (as nobody wanted credit for that look but me).

In the early 1960's, Jackie Kennedy, Audrey Hepburn and the Givenchy shift dominated fashion and the world's skirts were just covering the knee. Pearls were part of the chic "love me, but don't touch me" look and bras were thick cotton and ironed into torpedo points. That look was not going to get me this hot man.

The truth is that the creation of the worlds first mini was over a MAN. I fell in love with a charismatic blue eyed blond folk singer, Steve Denaut in Greenwich Village. He was wearing the first skin tight black leather pants I'd ever seen, with no underwear and a matching sleeveless black vest. It was not him but a life size POSTER standing in front of the Playhouse Cafe on MacDougal Street in early October 1961. I went inside that night and heard Steve sing "Daddy Ball Em" while strumming his guitar. Having loved Elvis, this was a new sound, folk singing. I fell in love with the man and his music. I had moved to New York from posh Chevy Chase, Maryland to attend fashion school at Pratt Institute in Brooklyn and in an instant I knew I had to move to the Village, I had to have Steve, and I knew that a special dress would do the trick.

In the fall of 1961, I bought four soft black leather skins and made a vest to match Steve's, but fringed the bottom, with a scissors and pushed up multiple colored beads into the fringe. I made a matching shoulder bag with fringe and beads. There was a tiny bit of leather left over and I made a skirt stopping two inches above my knee, which I kept cutting shorter and shorter, thus the birth of the mini. I shortened the leather until he was MINE.

I was soon hired as a "pass the hat girl" for the Playhouse Cafe and collected money for my folk singers, Bobby Zimmerman (Bob Dylan), Ritchie Havens, Fred Neil, and Steve, who renamed me "Peaches Latour". Steve was married, had a daughter Lisa, (Rosanna Arquette), and was recently separated from his wife, Brenda, who had been a nude model for artists. I had some serious competition.

In my village apartment, I continued to sell leather clothes for men and women and used the money to move to Paris.

Mia and I showed our short leather clothes in the couture shows in Paris July 1964 after having been "discovered " by couturier, Louis Feraud. Our four inch above the knee dresses were called 'YeYe' fashions by the press, not minis. In London in the same summer, John Bates the designer of the house of Jean Veron, one of the first English ready to wear houses, designed above the knee dresses in Pop Art style. He would put these dresses on Diana Rigg, a Shakespearean actress playing the first modern power-woman on TV in" The Avengers". She was recently named one of the top one hundred sexiest women in film. In 1965 she wore skin tight plastic jumpsuits for street wear, as her formidable character, Mrs Emma Peel.

Mary Quant and her husband publicist, Alexander Plunkett Green, opened a dress shop in London, called Bazaar. In the summer of 1964, he publicized that she invented the miniskirt giving the short skirt a name Mini, after her favorite car, but hardly inventing it as, Mr Bates had previously shown the length, the first above the knee dresses shown in England.

Mia and I could hardly care less as to claim inventing something as we were creating so many new clothes while doing movie costumes, being photographed au natural for our shopping bag, and signing multiple licensing contracts of printed and lace stockings, clogs, thigh high boots, bedroom slippers for shoes, the 'Pussycat' one piece jumpsuits in cashmere snakeskin worn by Ursula Andress... and of course the no bra worn under lace tops and matching lace tights over black leather, which takes me back to how I closed the deal and really got Steve to fall in love with 'Peaches' in the Village. Today I still possess my last mini, made at Feraud in Winter of 1965. It was in black couture wool, fourteen inches from waist to hem. Today the mini is back and it takes a special woman to wear that length, a strong shapely leg and a stronger sense of personal power.

The wrap dress was first designed in 1946 by a great American designer who died way too young. Claire McCardell's first wrapped around dress was a wide sleeved cotton striped dress with one large pocket in the front and side ties at the waist and she called it "The Popover". Millions were sold.

In the early 1962 I met Mia Fonnsagrives at Parsons in Manhattan. I had charmed Daddy to let me transfer schools so I could live in Greenwich Village. I entertained the folk singers in my floor through pink brownstone apartment on Jones Street with parties called "happenings", and Mia happened to walk in one night with an orange fake poodle fur coat she had whipped up, over an orange wool wrap around skirt that was four inches above the knee and tied to the side.
We perfected that skirt as designers in Paris when we made the wrap dress that tied at the waist in snappy bright pink rayon prints for Joan Arkin for Bloomingdales and the dress made the windows. It also made Redbook magazine In May1967. We used it that year in the movie "Candy", where Ewa Aulin seduces Ringo Starr, wearing the wrap dress in mint green. It became a staple in fashion in Europe soon afterwards in many Milanese sportswear collections. Then in 1971 it is "invented" by Diane Von Furstenberg, who probably had assistants who designed with her and probably didn't realize that design was already out there. She certainly popularized it, as did Mary Quant with the mini. They did not invent these designs.

The fashion industry has a tremendous number of suicides, one of it's artists Alexander McQueen is the most recent. My Parsons graduating class had a suicide of our most promising female designer. It's an industry with an unusual amount of pressure to succeed season after season. I have been working until now since 1968 without a break. There are four seasons to fill up the stores with new clothes, that must SELL. I lecture young students to work as hard as they possibly can but to not take any criticism to heart. Just learn. Often the worst students, like myself at fashion school, have the most novel talent and a talent that is hard for older teachers to visualize. Artists must fulfill their creative needs and not worry or fret about who is INSPIRED by their work... just create and be happy every day, happy to not have a paperwork job, for being an artist is a great gift.

Before her death, I sat at at the glamorous Rita Hayworth Alzheimer's Ball, something I rarely do anymore, with Eleanor Lambert, the doyenne of the fashion publicity world, who established the Best Dressed List. The grand dame spoke, and all artists should listen to her brilliant advise. She told me as I was discussing the MINI wars and who did what first and she quietly said " Vicky, it doesn't matter who did what first, the only thing that matters is that you are GOOD and that you LAST."