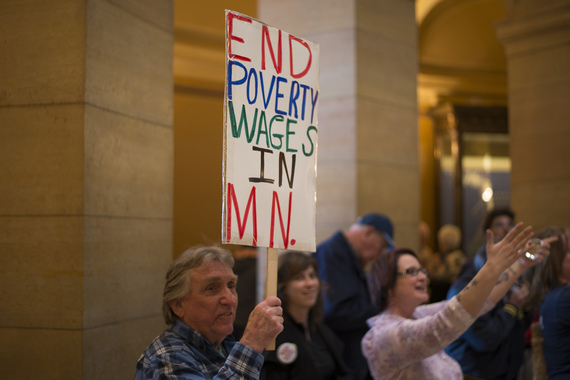 In last year's State of the Union speech, President Obama called for congress to raise the federal minimum wage from $7.25 to $9 an hour. Since then, the conversation has shifted to an even-higher $10.10. But there has been a heated debate over the effects of such an increase. One side argues that a wage increase will put more money in people's pockets and aid in the economic recovery. The other claims that such a large increase will put a strain on businesses, causing them to lay off workers. Others still, simply believe that minimum wage workers shouldn't be making any more than they already are.

This topic is most certainly a complicated one. To make matters more difficult, each camp inevitably views the issue through the lens of their own belief system, leading to a myriad of assumptions, speculations and hypotheticals that produce different conclusions across the board. So, where do we start? Let's begin by saying this: the American system is broken.

We know the United States lags behind other developed nations in most education categories. In 2012, the Program for International Student Assessment (PISA) found that, among the 65 countries polled, U.S. students ranked 29th, 22nd and 19th respectively in mathematics, science and reading levels. Harvard professor Jan Rivkin, who co-chairs a project on U.S. competitiveness, says these rankings haven't been caused by America falling behind but, instead, by the country's general education stagnation. "While our scores in reading are the same as 2009, scores from Belgium, Estonia, Germany, Ireland, Poland and others have improved and now surpass ours," she said in an interview with NPR. "Other countries that were behind us, like Italy and Portugal, are now catching up. We are in a race in the global economy. The problem is not that we're slowing down. The problem is that the other runners are getting faster."

We know that the once-strong American middle class has eroded while the super-rich prosper. In a recent article published by The New York Times, Lawrence Katz, a Harvard economist, said that, though middle-class Americans have historically been better off than those in other countries, they haven't been able to keep pace with other nations over the last 20 to 30 years. "In 1960, we were massively richer than anyone else. In 1980, we were richer. In the 1990s, we were still richer," said Katz. "The idea that the median American has so much more income than the middle class in all other parts of the world is not true these days." In fact, median per capita income in the United States has stayed flat since 2010 while Britain, the Netherlands and Canada have seen increases between 14 and 20 percent over that same period. However, if we step outside the middle class an even grimmer picture starts to form. The same April 22nd New York Times piece notes, "At the 20th percentile -- where someone is making less than four-fifths of the population -- income in both the Netherlands and Canada was 15 percent higher than income in the United States in 2010."

How can we account for these discrepancies and lack of growth? In a Washington Post piece early this year on economic mobility, David Autor, an MIT economist who writes frequently about issues related to inequality, said many economists will use the evidence to support their preconceived notions about the effectiveness of government programs, such as Pell grants, Head Start and nutritional supplements for children. But, he said you could also draw another conclusion: "you can view this as: Social policies have fought market forces to a draw."

At the basis of American Capitalism is the idea of a "free market" or market economy where supply and demand influence investment, production and distribution, free from intervention. Our nation has operated under the theory -- or assumption -- that this is the path to innovation, wealth and growth. But is it?

The very richest continue to accumulate wealth while everyone else's incomes have remained flat. Atif Mian, a professor of economics at Princeton University, and Amir Sufi, Professor of Finance at the University of Chicago, display in a piece on wealth inequality that the percentage of wealth held by the top 0.1 percent of households in the United States has risen from a steady 10 percent from 1940 to 1970 to more than 20 percent of the country's total wealth today. The massive gains this segment has enjoyed over the last 30 years have brought it back to the levels of wealth they held earlier in the 20th century, peaking at the end of the 1920s immediately before the Great Depression. That event started a steady decline over the next 15 to 20 years -- the wealth figures from the "Great Recession," however, tell a very different story.

The share of wealth controlled by the super-rich in the United States has actually increased about five percentage points (from 17 to 23 percent) since 2008. So, as opposed to what we see as a result of the Great Depression, the rich have actually gotten richer since the economy tanked. How did this happen? Well, for one, we had the bailout, which redistributed $700 billion from the pockets of taxpayers into the very institutions that had caused the crash through their questionable lending practices. Citigroup, Wells Fargo, Bank of America, J.P Morgan Chase, Morgan Stanley and Goldman Sachs all received between $10 billion and $25 billion as a result of the legislation. Nine of the banks, including those listed above, who were the largest recipients of bailout money paid about 5,000 of their traders and bankers bonuses of at least $1 million each. We've also seen the trimming down of the labor force -- people have been asked to work more for less pay. This trend, which had been justified by the dire economic conditions, hasn't subsided since the beginning of the recovery. Companies have simply "made due" which has allowed top executives to pocket more while recording record profits. In addition, some experts cite the decline in labor unions, trade liberalization and a dwindling minimum wage for the loss of the middle-income jobs that were once the backbone of America.

Is this the "free market" at work? Thomas Jefferson, himself, warned of the dangers of massive corporations and special interests more than 150 years earlier. In an 1825 letter to William Branch Giles, Jefferson spoke to the former statesman of "usurpation" and "the treasonable views of the federal party." He warned of the demise of the current government and the institution of an Aristocracy by those who didn't uphold the values on which the country was founded. Jefferson said they, "now look to a single and splendid government of an Aristocracy, founded on banking institutions and monied in corporations under the guise and cloak of their favored branches of manufactures commerce and navigation, riding and ruling over the plundered ploughman and beggared yeomanry." This warning is especially poignant today considering the recent study by researchers at Princeton and Northwestern University that concluded the United States is, essentially, just that -- an aristocracy.

Actually, in spite of the "free market" talk, the United States economy is far from a freely operating Capitalist system. Why is this? In the United States, we, as people, have rights. Yes, we have rights, rights that often run contrary to market forces. Unions organized in order to prevent worker exploitation during the industrial revolution; our minimum wage was instituted by Franklin Roosevelt in 1938 as part of the Fair Labor Standards Act, which also established the 40-hour work week, overtime pay and bans on child labor; and we've created a number of programs, such as unemployment insurance, to soften the blow of hard times on regular people.

However, it isn't because of some "overwhelming moral urge" that programs, organizations and standards such as these exist. We've learned something that has caused them to persist: the market is flawed. We realized that the more people who do better, the better for all of us. The United States experienced the height of its power and wealth in the years immediately after the Great Depression and World War II when, unsurprisingly, the American middle class was the strongest it's ever been. Even up until 1968, minimum wage workers made today's equivalent of $10 an hour. We can still see evidence of this populist advantage today in Sweden -- a massive welfare state -- where per capita G.D.P. has grown more quickly than in the United States over almost any extended period of time in the last 30 years. They've seen a sharp increase in the amount of college graduates, which has, in turn, stimulated high-skilled job growth.

So, what do we do, then? Do we simply tell our workers to fend for themselves? After all, according to John Locke, the purpose of establishing a civil government is to protect the freedom and well being of all members of society. What good does it gain us if our country houses a hundred of the world's most wealthy if our poor cannot eat, by their own hand? We criticize social programs because they "make people lazy" but then we still don't want to pay people reasonably for the work they're doing. More so, we can't reasonably expect people to be in the position to take advantage of opportunities to improve their station if they have no power to do so; quite frankly, in today's America, money is power.

Not everyone has to be wealthy but everyone should, at least, be able to work hard and know that, if they do that, they'll be able to provide for themselves. Otherwise, the state is nothing more than a cruel master.