I think this is a pretty remarkable picture that hasn't gotten enough attention, perhaps because it's a touch complex. It shows the relationship between wage inequality among women workers and the minimum wage, and the fit is very tight.

The blue line shows the gap in pay between middle- and low-wage women, i.e., the 50-10 gap, where 50 means the median wage and 10 means the 10th percentile. Over the course of the 1980s, the median female real wage grew 8 percent while the 10th percent wage fell 17 percent. The red line is the real minimum wage, inverted on the right side axis, so you can clearly see the negative correlation. Note that the real minimum fell 30 percent over the 1980s.

Basically, for many years, the pay of the lowest paid women workers was in no small part set by the minimum wage, and it remains a key labor market support for low-earning women. As we document here, 58 percent of the beneficiaries of the proposed increase in the federal minimum wage are women.

What happened at the end of the slide, when the real minimum goes up (down in the inverted graph) but the 50-10 wage gap stays flat? That's good old macro, folks: over the period where the inequality index has been flat, real wages fell for both median and low-wage women (e.g., from 2004-13, down 3 percent for low-wage and 2 percent for median).

So higher minimum wages help both raise living standards and dampen inequality, especially for women workers, but they can't take the place of full employment. 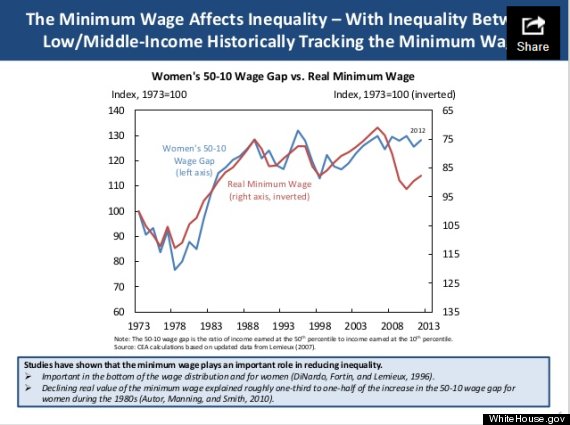