A new "minimum wage fee" tacked on to receipts at a Minnesota restaurant is proving hard for customers to stomach.

Facebook users are bombarding Oasis Café, an eatery in Stillwater, Minnesota, with negative reviews, many vowing to never eat there again, after the owners began adding a 35-cent surcharge below the tax on bills this week.

"If you need to raise prices, so be it," Ryan Stegeman, a University of Minnesota student, wrote in a one-star review hidden by the administrator of the Oasis Café Facebook page. "But to blame it on a fair minimum wage law is petty." 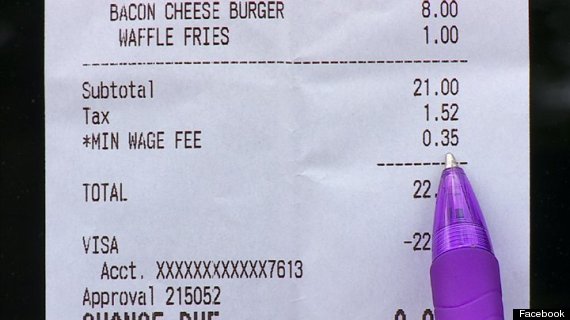 Minnesota raised its minimum wage by 75 cents to $8 last week -- the first increase in the state since 2009.

An owner of the café claimed the 35-cent fee was a way of "thumbing my nose at the law change," according to CBS-affiliate WCCO.

"Shame on your protest over over a small increase in pay required by law," wrote Facebook user Terry Edgar in a one-star review. "Hopefully customers will not continue to patronize your cheapskate establishment."

By Wednesday evening, the café's most recent Facebook post, a photo of huevos rancheros slathered in cilantro salsa, had 94 comments, most of them berating the restaurant's owners for refusing to pay its employees a living wage.

Oasis, which did not respond to a call from The Huffington Post, is not the only eatery that's asked its customers to help absorb the cost of Minnesota's new minimum-wage law.

Blue Plate Co., which owns eight restaurants throughout the Twin Cities area, said it would make servers pay the card fee on tips paid with credit cards, according to the Minneapolis Star Tribune.

Clarification: Language has been amended to more precisely describe Blue Plate's policy regarding customers who tip with credit cards.


Tuesday, Aug. 12 -- Craig Beemer, the owner of Oasis Café, said in a statement that his "family is conservative in our views," but that he didn't mean to make "some grand political statement about the minimum wage debate." He wrote: "To those customers who we've offended with our minimum wage fee, please know it was not our intent to be offensive and that we hope you'll find a way to forgive us." But he told HuffPost by phone that he has no plans to change the policy.