If you have a job that pays the federal minimum wage, an hour of your work is worth $7.25, before taxes. Activists and lawmakers from around the country say this amount and slightly higher state-based rates don't offer workers enough to pay for life's basics. President Barack Obama and his administration have called for Congress to raise the federal minimum wage, but Republicans have resisted a proposal to raise the federal minimum to $10.10 an hour over three years, claiming businesses can't afford to pay workers more. A wage hike would lead to devastating job losses, they say, and would do nothing to increase job opportunities or address poverty.

A Congressional Budget Office study calls those arguments into question.

As the debate continues in Congress and in states, here are 17 numbers to help you understand what it means to be making the federal minimum wage, and why it's long past time for an increase:

The number of months since the last minimum wage increase, in July 2009.

The number of states -- not including Washington, D.C. -- that have raised the minimum wage above the federal rate. The highest state minimum wage is in Washington state, at $9.32 an hour -- still below the proposed federal minimum. 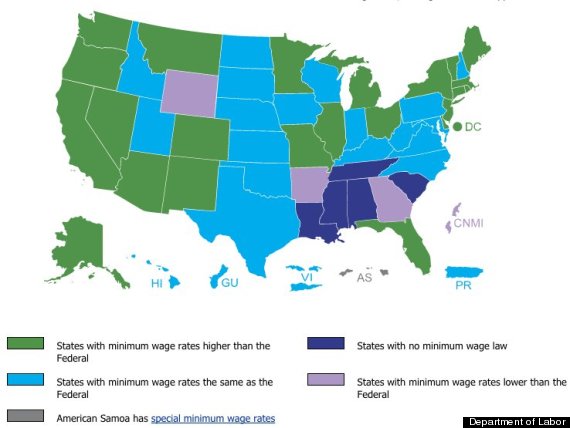 The purchasing power the federal minimum wage has lost to inflation since the last time it was raised, according to Pew data from 2013. The left-leaning National Employment Law Project reports that the real value of the minimum wage peaked in 1968, when its $1.60-an-hour rate would have been worth close to $10.50 in today's economy.

What the minimum wage would have been in 2012 if it had kept up with worker productivity since the late-1940s, according to a study published last year.

The number of hourly workers who were making the federal minimum wage in 2013, according to Pew. About 50.4 percent of these workers were ages 16 to 24, and just under a quarter were teenagers. About 64 percent of them worked part time.

The number of workers who would see an increase in wages if the federal minimum were to be increased to $10.10 over three years. According to the Economic Policy Institute, 88 percent of them are older than 20 and a third are over 40. National Employment Law Project says two-thirds of all low-wage workers were employed by large, highly profitable corporations.

The number of people who would have been lifted out of poverty under the plan to raise the minimum wage to $10.10 over three years, according to a study published late last year.

The Congressional Budget Office has estimated that around 500,000 jobs may be eliminated if the minimum wage was raised to $10.10, though other estimates have suggested the impact would be significantly smaller.

The average monthly apartment rental price in the United States in the second quarter of 2014, according to real estate data firm Reis Inc. This is almost as much as you'd make in a month on a single minimum-wage income, which is one reason why minimum-wage workers typically can't afford to be the primary breadwinners of their families.

The average price of a one-bedroom rental in Benton County, Iowa, the cheapest U.S. zip code, according to Find The Best. After paying for rent, a single, full-time minimum-wage employee would have less than $750 to spend on everything else for the rest of the month.

The average a household pays for basic gas and electricity per month, according to an analysis of the spending habits of Mint.com users across the nation in 2011. Utility prices have since risen in many places.

The average U.S. price for a gallon of gasoline , as of the last week of September. If a car has a 15-gallon tank, it would cost around $50 to fill up. That's about a full day's pay on minimum wage.

On top of gas, drivers must pay for car insurance, which according to a 2011 report came out to a nationwide average of around $800 a year. Premiums have increased in many places since, with estimates of average rates as high $1,500 a year. That would be more than a month's salary for a minimum-wage earner.

The price of the cheapest monthly pass for the SEPTA public transportation system in Philadelphia, one of the largest U.S. cities without state or local laws raising the minimum wage above the federal standard. A minimum-wage earner who relies on public transportation to get to work in Philadelphia would spend more than $1,000 each year on these passes, from annual pay of around $14,000.

Activists in Pennsylvania have been pushing for a minimum-wage increase to $10.10, but state lawmakers didn't consider a bill last legislative session. This year, Philadelphia Mayor Michael Nutter signed an executive order raising the minimum wage for city contractors to more than $10 an hour, but the measure doesn't affect other employees.

The estimated amount a low-income, single-parent family will spend on food, clothing, child care and miscellaneous needs during the first year of a baby's life, according to 2013 data compiled by the U.S. Department of Agriculture. The overall cost is significantly larger when housing, transportation and health care expenses are included. These numbers help explain why second sources of income (from other family members or individuals) and assistance programs are vital to low-wage and minimum-wage earners.

The number of hours a federal minimum wage worker would have to log to match the compensation package offered to Walmart CEO Doug McMillon for fiscal 2014, before taxes. McMillon was offered $25.6 million earlier this year, most of it in stock awards tied to performance -- a 168 percent increase from the prior year. USA Today reported this year that former Walmart CEO Mike Duke stepped down in January with $140.1 million in deferred compensation in retirement funds, vested shares and stock options.

Walmart, the largest private employer in the U.S., announced this year that it wouldn't oppose a hike to the federal minimum wage, so long as the proposal didn't specifically call out the company's business practices. Walmart's president noted at the time that only 5,000 of the company's 1 million or so U.S. hourly employees currently make the federal minimum wage, though many more make less than the $10.10 rate proposed in Congress.