With midterm elections just one month away, businesses owners have plenty of worries including rising health-care costs and regulations. But one issue in particular looms large: the minimum wage.

Four states have proposals on their ballots to raise the minimum wage beyond the federal, hourly rate of $7.25—Alaska, Arkansas, Nebraska and South Dakota. Notice a trend? All four are red states, and voter-approved wage gains in those predominantly Republican states could bolster the push for higher living wages—a key policy area for President Barack Obama and congressional Democrats.

While minimum wage often is perceived as a liberal issue, there's support for the cause across party lines nationwide, said Holly Sklar, director of Business for a Fair Minimum Wage, a national group.

"Among the American public generally, and even among business people, there's strong support in red states," Sklar said. "It's much less partisan than the way it comes across in Congress." 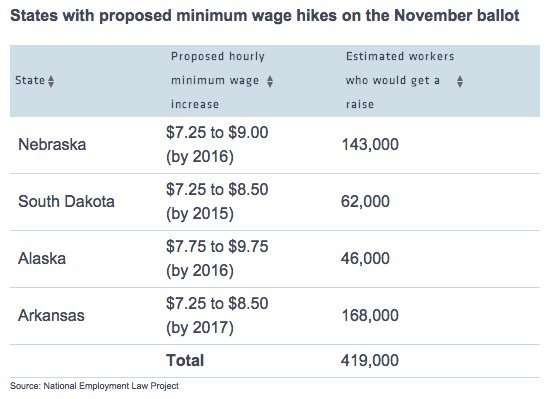 Fast-food strikers have sought to raise the minimum wage to $15 an hour, while President Obama has worked to raise the federal hourly rate to $10.10 for federal contractors. Those efforts, though, have been stymied, and the outcome of the midterm elections could serve as important ammunition for both sides of the aisle.

On the November ballots, proposals in the four states seek to raise hourly wages to as high as $9.75. Hundreds of thousands of workers would be affected if voters in all four states approved the wage measures.

Currently, 26 states plus Washington, D.C. have or will have wages above the federal minimum wage of $7.25 an hour by 2015, according to the National Employment Law Project.

But what's the potential impact to small businesses, where cost changes potentially are felt more sharply compared with larger employers?

More On CNBC:
Confidence in Obama on economy hits low
How feel-good companies are navigating the minimum-wage fray
In liberal cities, minimum wage puts businesses in a bind

A hit for small businesses

In Anchorage, Alaska, a November ballot measure seeks to raise the state minimum wage to $9.75 an hour by 2016, from $7.75 now. Kevin Turkington is president of Midnight Sun Home Care, which does errands and housekeeping for its elderly customers. He'll be voting "no" on the wage proposal on Election Day.

Turkington already pays his caregivers in the range of $13 to $16 an hour depending on their experience and skill sets. But based on state laws for caregivers, his workers can work 12-hour shifts and 24-hour live-in shifts. And wages for those longer shifts are pegged to the state's hourly minimum wage.

Under Alaska's current hourly wage rate of $7.75, Turkington says he's able to keep costs down for at-home long-term care that's roughly half the cost of staying at a nursing facility or some assisted-living homes. A higher minimum wage means higher prices for consumers.

"My concern is what it will do to the costs of care for those elderly and vulnerable adults, who depend on the care they need staying within reach," said Turkington in an email to CNBC. "It's not just raising the wage. It's raising the cost of the goods and services we all use."

Gary Burtless, labor market researcher at the Brookings Institution, says the November ballot initiatives likely will be unpopular among smaller employers. "The small-business community will be opposed to it—especially in areas like the fast food industry and the low-cost lodging industry," Burtless said.

And some local businesses that must pay higher wages than the federal level also face an unfair advantage, Burtless said. In Seattle, for example, the city council in June voted to raise the hourly minimum wage to $15, more than double the federal rate of $7.25.

"This will increase your costs, but won't impact someone right across the city line," he said. "That really has more competitive impacts on your business than would a nationwide increase at the same level."

Of course other business owners disagree and support wage gains.

Michael Kanter's business Cambridge Naturals sells natural foods. He's based in Cambridge, Massachusetts, which will have one of the highest hourly wages of any state, $11 by 2017.
Kanter already pays his workers well above minimim wage, at $12 an hour, and said it has never crossed his mind to lower wages. "It helps retain employees to pay them more money," he said.

And content employees creates a positive ripple effect for the company. "They're more likely to stay with us; they're happier on the job and communicate the value of our business to customers," Kanter said. "It's a valuable multiplier effect."

That includes employee retention. "We look at retaining employees as a real investment," he said.

Arun Ivatury, campaign strategist at the NELP, argues positives outweigh the negatives for small companies, when it comes to increased wages.

"Consumers don't take notice or change behaviors with small increases on the minimum wage, which lead to less than 5 percent in prices," Ivatury said. "On the other hand, when you increase wages for folks that don't have enough to live on, they immediately spend on the kinds of items small businesses sell."