Minimum wage workers haven’t seen their pay go up much in the past 50 years, but that doesn't mean they're less valuable to their employers.

The chart below from the New America Foundation, a non-profit public policy institute, shows that worker productivity has in fact skyrocketed even as the real minimum wage (which is the minimum wage adjusted for inflation) has seen slow growth. 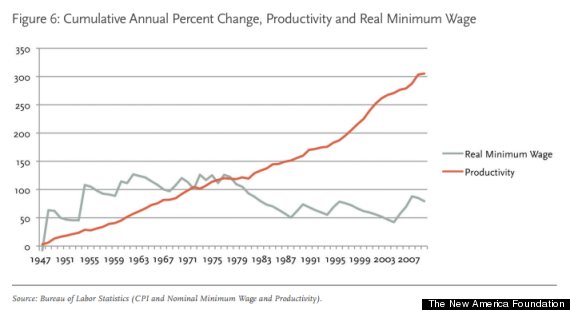 The New America Foundation report adds to the growing body of evidence that workers are getting squeezed while companies profit.

The minimum wage would be $21.72 an hour if it kept pace with increases in worker productivity, according to a March study by the Center for Economic and Policy Research.

Last quarter, hourly pay for non-farm workers saw the biggest drop since the Bureau of Labor Statistics started keeping track in 1947, even as corporate profits have soared to a record.

In fact, low-wage workers are largely employed by large, highly profitable companies, according to an analysis last year from the National Employment Law Project.

President Barack Obama proposed raising the minimum wage to $9 an hour in his State of the Union address earlier this year, a small step toward bringing workers’ wages closer in line with their employers’ profits. Still, the plan was met with opposition from Republican lawmakers.