I think that wherever possible, we should look to permanently eliminate underlying causes instead of treating symptoms without end. When it comes to minimum wage laws, we're perpetually treating a symptom and not a cause. The problem we wish to solve is that employees aren't getting paid enough to work. So the government then has to step in and say, "Hey, employers, you can't pay less than this amount, and employees, you can't accept less than this amount."

Well, why do we need to do this? Why aren't people getting paid enough? What's the core issue? I think people aren't getting paid enough because they can't really ask for more out of fear of getting nothing at all. They have no individual bargaining power. All negotiating power is in the hands of those offering the jobs and not those looking for them. Outside of unions, we can't say "No" to the terms of employment offered by employers. As long as our primary concern is that of paying for our basic needs like food and rent, all we can really say is "Yes".

If an employer can pay less, they will. They will even pay nothing wherever possible. Just look at unpaid internships. And because people prefer to eat and live indoors, and anything is better than nothing, people accept wages that are too low or even zero (in combination with work experience) because it's all better than the alternative - nothing.

So really, what we need to do is create a better alternative than nothing. If everyone were to start with $1,000 per month as a right of citizenship, a universal basic income, that's enough money outside of work to cover our most basic living expenses. That means no one is desperate for money anymore. In fact, according to our own federal poverty guidelines, poverty would be effectively abolished, as long as every child also got around $300 a month, because the amount required to not live in poverty varies by household size.

Now consider how a wage negotiation would go with a basic income in existence. Suddenly, $7 an hour may no longer be enough. Why work for $7 an hour when you're already getting $1,000 every month as a starting point for being alive? Maybe in order for an employer to find people willing to say "Yes" to work, they'd need to pay $15 an hour. Maybe one employer needs to only pay $5 an hour because it's a fun job, and another employer needs to pay $25 an hour because everyone hates that job. Even better, people can actually start sharing jobs. Maybe a job everyone hates can only get any one person to work ten hours a week at it, so instead of one person doing it 40 hours and hating it, 4 people do it for 10 hours and find it an entirely acceptable way to earn additional money.

This right here is possibly the best reason to go with basic income instead of a hodgepodge of minimum wage laws, earned income tax credits, welfare programs, food stamps, housing assistance, tax deductions, and all the rest. Because basic income provides an income floor, there's no longer any reason to keep any of these bureaucracy-filled ways of easing but never ending poverty. Instead, poverty would be gone. And because poverty is gone, all jobs have to either pay enough for people to accept them, or those jobs will be automated. If automated, no one has to do that job anymore. They can do something else instead.

They could do work in the gig economy, driving people for Uber, without all the desperation it involves now racing around trying to find enough riders to scrape by each month. People could even do entirely unpaid work like volunteering or open source programming. All sorts of doors become opened as options to walk through instead of traditional labor.

Some people will then say this is paying people not to work. But that's actually what we're already doing. Right now, if you're receiving assistance, it will be pulled away with higher earnings. A better word would probably be yanked. That help is yanked away at steep rates, so steep that it's actually possible for someone without a job to earn $12,000 in benefits, get a job, lose the benefits, and then earn $12,000 in income. It's not paying people to work if working leaves them with a net income increase of $0.

In the real world example below of a single mother with two kids, a raise of $1,000 (possibly thanks to a higher minimum wage) can leave her $7,000 worse off thanks to the immediate loss of $8,000 in food and housing benefits. 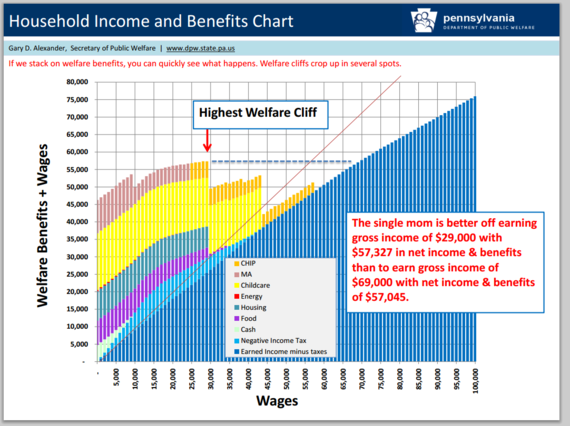 So right now, work doesn't always pay, and we even pay others to make sure it doesn't pay, by monitoring those on assistance to make sure they either aren't working or report any additional income. With a universal basic income, work would always pay. $12,000 would be a floor that no one would earn any amount below, and everyone would earn everything on top of. No job? You get $12,000. Got a job? You get $30,000 more for a total of $42,000. No more welfare cliffs.

With a basic income, everyone would get a raise. That also doesn't happen with policies like minimum wage, or tax credits like the home mortgage interest rate deduction. Those only affect certain portions of the population, and they certainly don't help the portion of the population unable to find a job. Meanwhile the programs for them, don't help them as much as we think they do. In Wyoming, 1% of those living below the federal poverty line receive temporary assistance for needy families. Food stamps tend to only last to the third week each month. Only 1 out of 4 people who qualify for housing assistance actually get it. Referring to our system as a safety net is actually very appropriate because it's full of holes.

There are no holes with a universal basic income. Everyone gets it. No questions asked. No forms to fill out. No classes to go to or middlemen to meet with. No stigma attached because everyone gets the same thing no matter how much is earned. Instead, some people just pay more in taxes than others, and those taxes can even be financial transaction taxes or carbon taxes or consumption taxes. Income taxes can actually even go down as a result for over 80% of all households, because a household of two adults and two kids could all together get the equivalent of a $32,000 refundable tax credit. So this idea that a basic income would have to raise everyone's income taxes is overblown. Some taxes would go up, but certainly not the taxes of the middle classes and below.

Minimum wage is a tool of a previous century. When we wield it now with technology as advanced as it is, we will only increase technological unemployment. Why pay someone $15 an hour, when touchscreen kiosks are enough to do the job more efficiently at a lower cost? Mandatory higher wages only help those with jobs, and many of these jobs are jobs people would refuse to take without sufficient pay if they had that choice. If people could refuse jobs that don't pay enough because they already have enough to get by, and the result would be that people either get paid more or no one has to do those jobs anymore, why not immediately do this instead? Why not give people the ability to refuse jobs entirely, and instead pursue the work most important to them?

If we can do that, if we can use a 21st century tool like basic income instead, we can obviate the need for minimum wage laws and a whole lot of other needless things as well, up to and including the existence of poverty itself.

Want to help? Contact your representative and tell them to support the Healthy Climate and Family Security Act of 2015 which would provide everyone with a Social Security number an equal share of the revenue raised by making the air we all breathe more expensive to pollute, or in other words, a 'cap and dividend' universal partial basic income. You can also sign this petition to the President and Congress for a basic income for all, or donate your time or money to Basic Income Action, a non-profit organization founded to transform basic income from idea to reality. You can also support articles like this by sharing them.

Scott Santens writes about basic income on his blog and is actively crowdfunding a basic income on Patreon. You can follow him on Medium, on Twitter, on Facebook or on Reddit where he is a moderator for the /r/BasicIncome community of over 29,000 subscribers.