There are thousands of ways to be an entrepreneur, and almost all of them require dedication, hard work and, often, a capital investment--not to mention a windy road to success. A new form of entrepreneurship called digital "mining" is making its way into the fold of profitable ventures. At first glance, it may seem like a way to make free money, but it's really more than that. Just like all entrepreneurial projects, digital mining involves commitment, investment and work. With the right investment, dedication, and strategy, you can literally manufacture this revolutionary new currency and then trade it for dollars, or buy goods and services at hundreds of merchants. Sound too good to be true? Read on.

If you haven't heard of digital mining yet, you will soon. The main digital bullion gaining attention at this point is Bitcoin; in second place is Litecoin, and PPCoin and others are following that. Bitcoin is the "gold standard" of digital currency, so for the sake of this article, I am going to focus on Bitcoin from here on out. You can assume that the general principles behind LiteCoin and other digital currencies are similar.

Based on the concept of crypto-currency and peer-to-peer technology, Bitcoin technology--which the Daily Mail UK called a "cult currency trend" in a recent article--is a new kind of money that is created, shared and managed with cryptography (the science of encrypting valuable information so it can be safely shared over the internet). An open source project that is taking money out of the hands of banks and putting it in the hands of the people, the Bitcoin movement allows consumers to make online payments directly to a vendor without the involvement of a bank, Paypal or other financial institution.

In the spirit of social good, Bitcoin's anonymous inventor has never revealed his or her name and has moved on from the project, leaving it in the hands of countless grassroots developers around the world. In 2012, the Bitcoin Foundation was created to help standardize, protect and promote Bitcoin as a new paradigm in currency. The Bitcoin economy is growing stronger every day. One of the fascinating things that's happened as the Bitcoin project has taken off is that ambitious, forward-thinking techies have begun to create and collect supercomputers designed to mine Bitcoin information and find the 21 million Bitcoins hidden across an internet-based network.

The big question everyone asks is "How does this work?" How can your computer make currency that's actually worth something? The short answer is this: most computers cannot. In the early days they could, but now users who want to make any real profit need to invest in some serious hardware. Once they have what it takes, they can contribute that processing power to a group called a "pool" and earn a share of all the currency created collectively.

Here is an example of a custom bitcoin-mining machine, or rig, as it's called amongst those who build computer hardware. 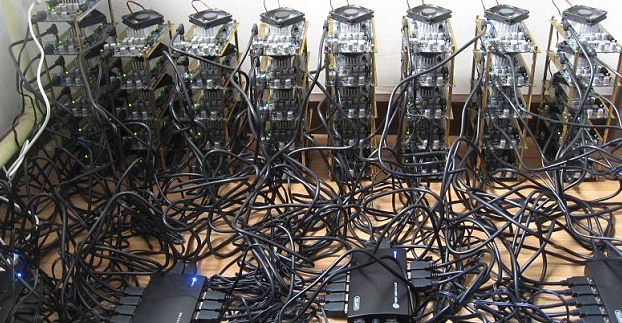 For those who wouldn't dare build something as complex looking as this, there are companies cropping up that are offering turnkey mining machines. And they can't make them fast enough. (Teaser: in my next piece, I'll talk to one of these companies.)

At this point, you're probably confused. Bitcoin mining is a complex operation--too much to explain in this short post. A video is worth a thousand words, and this one explains it well. Watch it, and then we will continue below with some FAQs:

How Do I Make Bitcoins?

The mining, or making, of bitcoins goes like this:

What's a Bitcoin Worth?

Bitcoin worth depends on the current price on the Bitcoin exchange. There is a daily exchange rate for Bitcoins just like there is for any other stock. The rate, as of this article, was $156USD/Bitcoin. In other words, if someone pays you in 10 Bitcoins, they are paying you the equivalent of $1,560 USD. You can get the real-time exchange rates on bitcoincharts.com. You can sell your bitcoins at mtgox.com, and you can find vendor lists where you can trade Bitcoins for goods and services at places like bitcoinstore.com, and www.spendbitcoins.com.

Now that you hopefully understand the general concept, stay tuned for my next post, where I'll interview Jeff Ownby, the VP Marketing at Butterfly Labs, who manufacture a line of high-speed encryption processors for use in Bitcoin mining, research, telecommunication and security applications. I'm also going to include an interview from two or more experienced miners, in order to give you some real world feedback on what it means to mine for this digital-bullion.

Tune in again next week!