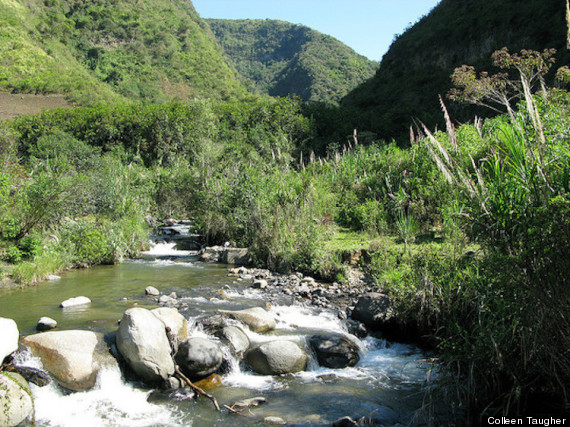 This article originally appeared on cuslar.org

On the heels of the "largest climate march in history," where hundreds of thousands of activists, demonstrators, politicians, and environmentalists gathered together to protest in solidarity against climate change; NYC's sixth annual Climate Week; and the United Nations Climate Summit, the issue of climate change is certainly a hot topic, so to speak. Over the past few weeks, at least 50 foundations have pledged to sell off holdings in the world's top oil and gas producers, while leaders like Archbishop Desmond Tutu and major business companies -- including Big Oil -- have pledged to divest from fossil fuels and cut carbon dioxide emissions. However, amid all the fanfare around the pledges to fight climate change and global warming, another environmental issue has failed to reach the masses, one that over the last several decades has had devastating and irrevocable ramifications for rural communities worldwide.

Historically, the mining industry has played an instrumental role in our society as the primary method of mineral extraction; for developing countries in particular, the industry's importance in generating revenue and employment is crucial. Yet, with mining comes a range of negative environmental and social impacts, and unfortunately, the developing world typically suffers the most.

Last month, while the world's most prominent and influential leaders discussed our current environmental challenges and their potential solutions at the 69th Session of the UN General Assembly, the Ecuadorian Ministry of the Environment released its Environmental Impact Assessment (EIA) for Llurimagua, an area that is a part of Ecuador's Intag Valley. This Assessment is yet another chapter in the history of the Intag Valley, an embattled region that has been plagued with conflict and the threat of environmental, political, and social degradation due to mining extraction and exploitation.

Over twenty years ago, Bishmetals, a subsidiary of the Mitsubishi Corporation, began a copper mining project in the Intag Valley. The project resulted in significant deforestation, impacted dozens of endangered mammals and birds, polluted rivers with heavy metals and minerals, and increased crime and internal displacement and relocation within several different communities in the Valley. In response, strong opposition in the region ensued: DECOIN (Defensa y Conservacion Ecologica de Intag) was founded as a grassroots environmental organization dedicated to reversing deforestation, conserving the unique biodiversity of the area, and battling mining companies that threaten to disrupt and destroy the Intag Valley. Bishmetals was eventually expelled, only to be replaced shortly thereafter by Ascendant Copper, a Canadian transnational corporation.

Since the early 1990's, Canada has increasingly invested in mining projects around the world; in fact, approximately 75 percent of the world's mining companies are based in Canada. Latin America is especially vulnerable due to its proximity to Canada, low tax burdens, mineral rich landmass, and neoliberal economic policies. In 2013, 29 percent of all global mining investments were undertaken in the region. Of those investments, large-scale Canadian mining companies controlled an estimated 50-70 percent.

The arrival of Ascendant Copper sparked a "reign of terror" that lasted for several years. During this time, the Intag residents fought against paramilitary forces and local leaders of the opposition were beaten, threatened, and illegally arrested. The conflict between the mining company and the local communities was documented in the film Under Rich Earth, in an attempt to raise awareness about the plight of those living in the region.

Finally, in 2008 the government of Ecuador expelled Ascendant Copper; however, in 2011 the conflict was revived when the government signed an agreement with the Chilean government that enlisted the help of Codelco, the largest copper producer in the world. As a part of the agreement, Codelco was set to help ENAMI, an Ecuadorian state-owned mining company, explore and exploit Ecuadorian mining projects. Overwhelming opposition against the agreement has stalled Codelco and ENAMI's efforts to move forward, but ENAMI has still managed to successfully convince some local communities (those that won't be affected by the mining projects) to support its plans.

Fast forward to the Sept. 24 release of the EIA Llurimagua for Intag. Continuous rejection of Codelco and ENAMI's agreement has prevented them from carrying out the environmental impact study they need in order for their project to shift into the exploration and exploitation stage. But despite the years of fighting, resistance, and disapproval by local governments and communities, the Ecuadorian Government finally managed to conduct this Assessment and release their analysis. So, after all this time, what does the EIA reveal?

Although the Assessment represents a multitude of viewpoints ranging from lukewarm support to unequivocal opposition towards mining operations, the section regarding these perceptions is poorly referenced. Thus, results may not be representative of the communities where the data was collected.

Among the interviewees, local leaders note that public hearings and information sessions were not handled correctly. One leader says that skewed and incomplete information was shared about potential mining operations, and he asks for honest and transparent dialogue in affected areas. One interviewee says more local institutions should have been invited to participate, and he was "surprised" when police officers were called into the area. Another is quoted as saying, "We never wanted [it], and we will never permit the mining company to come here."

Furthermore, upon the EIA's release, the Ecuadorian Ministry stated that the document would only be open for comment for a mere two weeks, meaning that academics, scientists, activists, and community members had an inadequate amount of time to fully analyze and comment on the Assessment.

All of these pitfalls illustrate how interest in community participation is feigned but not actually encouraged in the process. In addition, prior environmental devastation and community dislocation in Intag during Bishmetals' operations in the 1990s wasn't mentioned in the Assessment at all, and should have been given more weight. Ultimately, because of the Assessment's flawed methods in seeking local input and participation, its conclusions may be skewed towards moving forward with mining operations in the region.

What Does the Future Hold for the Intag Valley?

Intag Valley residents have increasingly made their struggles known around the world. One of their emerging collaborations includes a group of students and faculty at Cornell University in Ithaca, New York. Founded in 2013, the Intag Project is an initiative at Cornell that partners students with community-run organizations in Ecuador. The students work on projects with the organizations and then travel to Ecuador each January to implement their work. According to founder Martin Zorrilla, the initiative has received an overwhelming amount of support.

"The program began as an experimental course in the Fall of 2013 with a remarkable amount of support from Cornell's Public Service Center (PSC), Engaged Learning and Research (ELR), and faculty members James Lassoie and Charlotte Jirousek," says Zorrilla. "After an incredibly successful first year we added it to the Cornell curriculum in the Spring of 2014.

"The experience has been an overwhelmingly positive one based on trust, that of the PSC and ELR in supporting the initiative, the faculty members for taking on this uncertain complex project, and the Intag community in investing in the partnership."

Zorrilla, who is a native of the Intag Region himself, has been involved in the struggle for years, long before the creation of the Intag Project. His father, Carlos, is a long-time member of the opposition, and as a result, Zorrilla's family has endured much danger.

"My father's involvement in the anti-mining fight dates back to the early 90's when it began with Bishimetals -- he and a local priest, Padre Giovanni Paz, were among the first to warn that the promise of mining brought with it destruction and contamination," says Zorrilla.

"When I was 16 my home was invaded by corrupt police that arrived in company cars -- with a gun to my head I watched as they placed a gun in my room and drugs in my living room. My concept of foreign interest, private business, and 'international development' was defined by these aggressive and violent acts.

"The ideology and justification for these acts have been the same whether from the Japanese, the Canadians, or my own government. Poverty is used as the pretext for extraction and the destruction of rural communities; wealth and roads are promised in exchange for our compliance to relinquish our rights to our land and water."

Despite the violence and hardship that Zorrilla, his family, and their fellow community members have faced, Zorrilla is still hopeful that the mining conflict will one day come to an end.

"I believe that the Intag struggle will be successful, that the project will fail and that we will be able to define our own future. I have to believe this, to do otherwise is to surrender, and the truth is that we have always faced enormous odds. The playing field isn't close to even," says Zorrilla.

"Still, the power of well-organized communities and strong regional and international allies can prevail and now more than ever we are part of something much bigger. Rural social movements have been growing and the push for natural resources all over Latin America has engendered powerful pushback. We need to work together, and we need all the help we can get because everyone on earth has a stake in what happens next."

Click here to learn more about the mining conflict, the Intag Project, and DECOIN.

Tim Shenk contributed to this report.