I was hired to help an organization that did manufacturing consulting get more business. It was just after the recession of the early 90's, and many of the consultants had lost their jobs with aerospace companies. They were wandering the halls worrying about being laid-off again because this company did not have enough work to go around. I was introduced to the person that was doing the sales for this organization. I could see one of the problems - he did not seem to know how to sell. He had a box of leads on the shelf that was labeled Dead leads. I asked him to tell me what a dead lead is. He said it's a lead where the prospect is not very interested. While I could fault this poor guy, I knew that so many sales trainers teach people to qualify their leads. They use the word "qualify" as a euphemism for discarding leads that are unworthy of further attention. Because I know the value that could be hidden in these leads, I train sales people to categorize rather than qualify leads. If they do, they have the opportunity to mine the considerable value often hidden in them.

Categorize rather than qualify

Effective sales people that understand marketing know there is value in each and every lead. After all, companies spend a lot of money to generate leads, and leads contain important information on prospects that expressed some interest in the products you are selling. If they weren't interested at some level, why would they waste their time to contact you and provide you with their contact information? They wouldn't (unless they were a competitor with an ulterior motive). Rather than discard leads, it's best to categorize them into three levels of interest. Because temperature is often used as a metaphor for degree of interest, leads are typically categorized into...

While sales trainers teach you to discard the "C" leads, it is useful to understand some of the many reasons why you shouldn't.

As good sales people know, when you categorize leads, you are often guessing at the degree of interest. According to some statistics, roughly 85% of sales people will typically discard leads if there is no response after three follow-up contacts. According to a McGraw-Hill study it takes 4.3 contacts to close a sale. Since you cannot make a fraction of a contact, the actual number is 5 contacts. As you can see, most people that call themselves sales people will not even get to that point. Here are four reasons not to discard "C" leads.

With the value of information going up as societies transform from manufacturing to information societies, it would make sense for all companies to realize that there is real value in each and every lead. Those that understand this point should make sure to do the following: 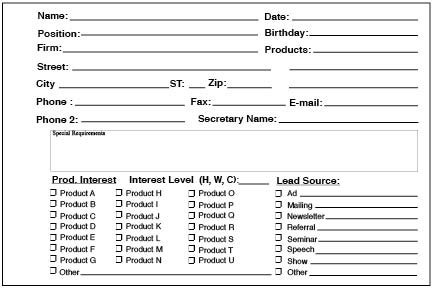 Don't discard the Gold in your leads

I have so many stories where "C" leads turned into "H" leads and large customer purchases with their own referral pyramids. I have so many others where "C" leads never bought from me, but referred others. This is how to play the sales game and win. There is gold in all of your leads. Mine the leads for gold. Don't throw them away. Best of luck.