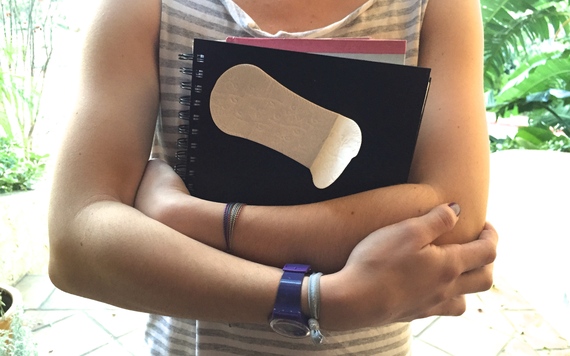 Circa 1992 (yikes) I was meeting with record label executive and mentor of sorts Jay Landers in his office in New York. On a whim (which was not unusual for Jay) he called Albert Hammond (Sr.) and asked him if he would write a song with me, and Albert said "Yes." Albert ("The Air That I Breathe," "It Never Rains In Southern California," "99 Miles From L.A.," "Nothing's Gonna Stop Us Now," "When I Need You" and of course, "To All The Girls I've Loved Before") Hammond. Why would he want to write with me? Shelly Nobody. Girl of no hits (yet). What could I possibly offer?

Three weeks later I was standing at Albert's door in Reseda, California. (When someone like Albert Hammond says yes you jump before they have a chance to change their mind.) He greeted me with a huge smile, arms wide open and a bit of a chuckle. What's so funny? Unbeknownst to me there was a Kotex mini-pad affixed to the writing journal I was clutching to my chest. He loved me on the spot. A little more because of the mini-pad, I'm sure of it.

Now I'm not recommending that you affix a feminine hygiene product to your iPad when you're on your way to meet a prospective collaborator. This was something that happened quite inadvertently. I only tell you of this detail because you never know what's going to break the ice and get the ball rolling. Hopefully something will.

Those days, when a writing session got going I would chill while my co-writer noodled around on a guitar. (Not that I wasn't a decent musician myself, but most of my collaborators were better.) Poised with pen and paper I'd wait for a tasty chord progression to light up the part of my brain that was receptive when it heard one. In which case the words would easily follow.

But on this occasion, Albert Hammond had me sit at his piano while he settled into a cushy throne-like armchair to my side. An emperor awaiting entertainment. I did not protest as I felt lucky simply to be there. He appeared to be rather enjoying himself...with the mini-pad girl. I was new blood. He was curious and open and positive (as I often am now when working for the first time with a newbie). He had no doubt I'd be just fine. I wasn't so sure. My hands came down softly on the piano keys and found a chord progression of their own. Bbm-Eb-Abm-Db. We were off and running. (At the risk of sounding like a cliche it's pretty interesting what you can pull off when someone believes in you.)

The song we wrote that day, "Have Mercy," went on to be recorded twice (though not by Aretha-- our dream cut). Albert introduced me to Guy Roche who produced the demo. Later I would write two #1 songs with Guy. (Thank you, Albert.) Albert and I continued writing regularly. (Thank you, Jay Landers.) Our second song, "Sensualite," was a massive hit in France and Belgium and has earned me more income than some of my more upscale U.S. cuts. Last year "Sensualite" got licensed for a condom ad.

I learned a lot from Albert Hammond. Once, he used a line in a song two times in a row. I said, "Umm, Albert...you just used the same line back to back." And he said, "So what? Did it feel good?" To which I replied, "Yes, I suppose it did." To which he replied, "Then don't worry about it."

I am eternally grateful that Albert said yes to Jay. It felt like a miracle to have been given a shot when I had little or no proof of qualification. I occasionally say yes myself these days if someone I trust suggests I give a new writer a go...or if I'm simply blown away by a demo or moved by a conversation. It feels good to pay it forward. And even if you don't write a remarkable song, you still might make a friend for life.

Please please visit me at my Serial Songwriter Facebeook Page. Feel free to like it. And check out my website too.