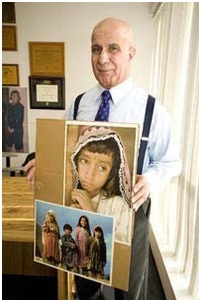 Those Were the Days Not only did the 1969 "summer of love" transform the culture of an entire generation in America, its global reach infected societies in faraway places such as Kabul, Afghanistan.

"When I was a professor at a very young age at the University of Kabul in 1969 - 1970 I witnessed miniskirts," Hasan Nouri, a civil engineer and award-winning humanitarian told me as he recounted days past in his native Afghanistan. "Before the Soviet invasion, Kabul had hospitals, museums, music, religious tolerance and freedom of expression."

Mr. Nouri said it was all made possible because the Afghan nation actually enjoyed a period of relative peace and stability under King Mohammed Zahir Shah for decades from the 1930s until his overthrow and exile in 1973. Nouri has always believed Afghanistan could see stability once again and even formulated a peace plan in the mid-1990s to establish a new regime under Zahir Shah.

Unfortunately, Nouri's peace plan largely fell on deaf ears in the U.S., and America ended up paying a heavy price. In a Congressional Club meeting Congressman Ed Royce once said: "If we had listened to Hasan Nouri, Sept. 11 would have never happened."

It's too bad others didn't listen.

Afghanistan's Cultural Ruin In the late sixties and early seventies Nouri watched as Communist ideology spread throughout the universities in Afghanistan as quickly as miniskirts did. Soviet indoctrination had been effective up to that point as an intellectual movement, but then in 1979 the Soviets committed the calamitous folly, in defiance of history, of forcefully invading Afghanistan - because the one thing Afghans have consistently rallied against is a foreign invader.

The disappointment in Mr. Nouri's voice was palpable when he described the absolute annihilation of Afghan culture and society from more than thirty years' worth of instability, repression and destruction wrought from the Soviet occupation, the post-Soviet civil wars, Taliban rule and now the nine-year-old U.S.-led intervention.

Mr. Nouri has not only grieved for his native country, he has also shed plenty of tears for his new homeland: America. In the wake of 9/11, the tears Mr. Nouri cried were ones of tragedy because if the United States of America had heeded the admonitions he gave in Congressional testimonies, three thousand people that perished in the Twin Towers on that day might still be alive.

A Humanitarian Perspective Mr. Nouri has participated in pivotal moments in the history of both his homelands. His American adventure began when Hasan's elite family in Afghanistan sent him to Georgia Tech during the sixties. From there he went on to become a successful civil engineer and left his imprint on both U.S. and Afghan societies through his work. He's the recipient of the prestigious Herbert Hoover Medal, a humanitarian award, which puts him in select company with Jimmy Carter and Dwight Eisenhower.

In 1984, Nouri and Dr. Robert Simon founded the nonprofit International Medical Corps (IMC) to provide health services in war-torn countries, including Afghanistan, where more than 50 M*A*S*H-style medical clinics were established to patch up "freedom fighters". In 1993 Nouri founded International Orphan Care (IOC), a nonprofit that builds orphanages, schools and medical clinics for an estimated 1.5 million children believed to have lost one or both parents during the seemingly ceaseless warfare in Afghanistan.

Because of his experience as an Afghan-American, his humanitarian perspective, his keen insights into Afghan tribal culture and society, and his deep understanding of the evils of war - Hasan Nouri has become one of the foremost experts on Afghanistan in the U.S. - and a voice U.S. leaders, hopefully, will seek out more and more.

Political Pragmatist Mr. Nouri has always been involved and has enjoyed U.S. politics, considers himself a Republican and was a supporter of the Reagan administration when they funded the anti-Soviet mujahideen movement. However, Hasan isn't blinded by party ideology - he has supported Democrats for President in the past. He actually uses a unique philosophic three-level hierarchy to describe himself: "First and foremost, I am a human being; second, I am an American; and third, I am a Republican."

Although he's a humanitarian, Mr. Nouri also understands sometimes ends do justify the means. When I asked him how he felt about the fact that funding the mujahideen helped create the Osama bin Ladens and Talibans of the world, he shrugged:

Look, it depends on the values and the politics at the time. The U.S. considers them terrorists today but when Reagan was in office the mujahideen were 'freedom fighters'.... and the Soviets were the ones calling them terrorists. Plus, the Taliban were able to take power in the first place because the U.S. abandoned Afghanistan after the Soviets withdrew.

Return of the King In 1993, soon after Nouri formulated his peace plan for Afghanistan, he introduced Congressman Dana Rohrabacher to the ex-king Zahir Shah who had been exiled in Rome. Nouri had sold Rohrabacher on the fact that Zahir Shah, whose 1933-to-1973 reign represented the longest period of stability in Afghan history, was the only person of stature remaining that all sides would respect as a leader who could establish a legitimate government.

The cornerstone to Nouri's peace plan was that the new government would have "no allegiance or loyalty to a particular nation or foreign power." Key components of the plan included constitutional law, compulsory military service, warlord abolition, reconstruction efforts financed by the international community and a ministry devoted to women and children.

History books will assert the plan failed because Zahir Shah could not reach a consensus with powerful Islamist factions; however, Nouri blames the Bill Clinton and George W. Bush administrations for their lack of support and their choosing to prop up moderates already in Afghanistan. Nouri testified before a congressional subcommittee in 1996, five years before the horrific events of Sept. 11, 2001 and uttered these haunting words: "Our administration should know that today's Afghan problem will become our problem tomorrow at home."

Fast forward to 2001: A tearful Nouri called Congressman Dana Rohrabacher the day after 9/11 and told him "it tears me to pieces" that Afghanistan had become a safe haven for terrorists. And Hasan stood in front of Congress and told them in testimony dated November 7, 2001: "Afghanistan unfortunately became the home of terrorists - largely because we abandoned Afghanistan."

Still Time to Right the Course Today, Hasan said President Obama's sending more troops into Afghanistan and supporting President Hamid Karzai's regime as if there are no alternatives are grave mistakes. Although Nouri curses the previous administration for inserting Karzai, he blames Obama for continuing an unwise policy.

If he had Mr. Obama's ear, Nouri would advise the President to form a committee of Afghan tribal leaders and conduct a Loya Jirga to establish a more legitimate government with no allegiance to outsiders. Hasan points to British imperial history for an example - they tried for 88 years and never succeeded in establishing a stable government in Afghanistan until they established one free of loyalty to the crown.

However, Nouri warns that the U.S. must be careful not to create another Saddam Hussein: "We need to achieve a happy medium somewhere between Saddam and Karzai."

Presidents Bill Clinton and George W. Bush refused to heed Nouri's counsel - one wonders if Obama ever will. Based on the administration's current course, however - we may never see miniskirts in Kabul ever again.