"The endless cycle of idea and action, endless invention, endless experiment, brings knowledge of motion, but not of stillness." - T. S. Eliot 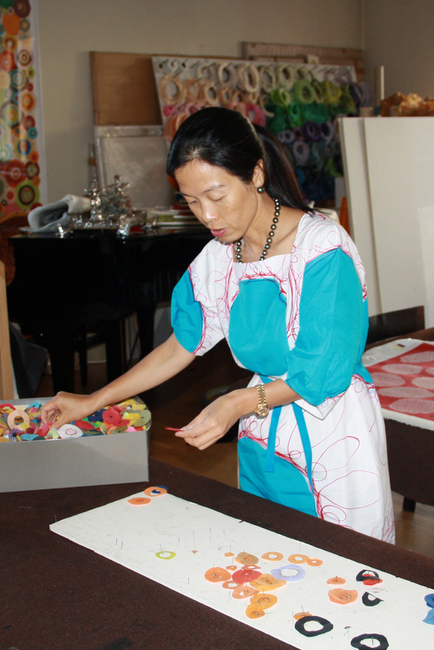 Artist Minjung Kim is a warm, engaging conversationalist who is proficient in four languages - Italian, French, English and Korean - and who also speaks "just a bit" of German. Along with being a polylinguist, she is an aesthetic internationalist whose art represents a highly individual synthesis of East and West. Although her background is apparently rich and interesting, when I recently spoke with her via telephone from her studio in Milan, she wanted to talk about her art and not about herself. Self-effacing, and deeply philosophical, Minjung Kim rigorously separates her private life from her artistic life. Her inner life, which is the true subject of her art, is her greatest priority.

"My art does not connect to my private life," she explained. "All artists have their private lives, but I work to overcome that." Because she characteristically moves away from the personal and particular towards the universal, Minjung Kim feels free to borrow from a wide range of spiritual, philosophical and aesthetic traditions. Strains of Daoist, Buddhist and Korean thought have influenced her, but so has her experience of western modern art. Ultimately, she works to blend and transcend all of these ingredients and move towards her personal creative center. "Gods create something," she notes whimsically; "I'm a little of God and a little bit of human being." 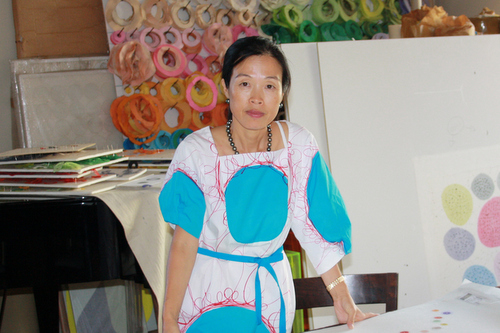 Kim's recent works, a series of singed rice paper rosettes that form constellations on open, hand-made paper fields, deal with the theme of predestination. "Each moment of ourselves is always predestined," she explained, "it is as if it is already designed." Kim is a seeker who tunes herself to search for harmonies and connections that form a kind of aesthetic web of fate. Creating art is her way making peace with life's joys and problems. 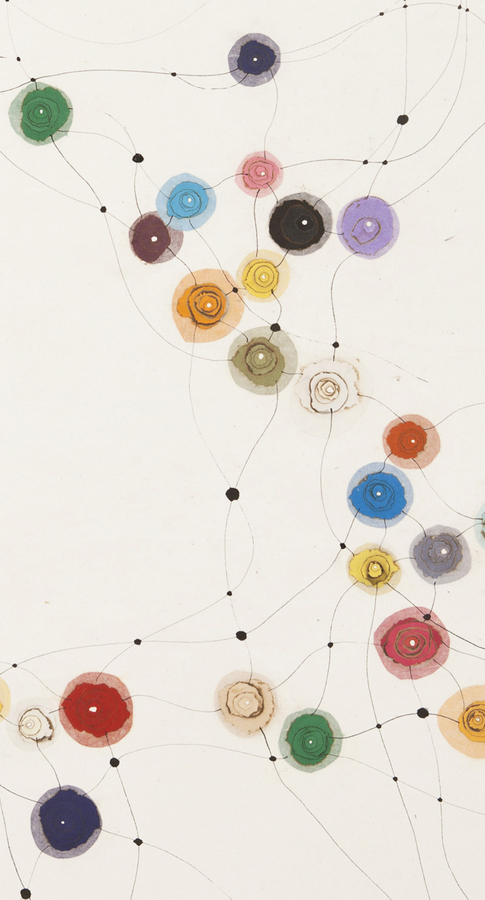 Above: detail of an image from Minjung Kim's "Predestination" series
Collage with burnt, colored rice paper and black ink on handmade paper

In Minjung Kim's recent collages, fire is both a tool and a conceptual element, and its role is to obliterate time and materiality. In the words of curator Robert Borghi, who wrote about Kim's work in 2003, "The fire represents effectively the quick passing of the facts and their going back to the emptiness." One of the key suggestions made by the works in Kim's "Predestination" series is that each burnt rosette represents a moment of existence captured in an evanescent, fragile medium. Those small moments, joined by a skein of fine ink lines, evoke a multiplicity of interconnected realities, concepts and energies.

When I asked Kim if the use of fire in her artistic process had been influenced by the work of the French modernist Yves Klein, she responded enthusiastically that she did admire Klein's work. She then went on to observe that she used fire very differently from Klein: "Western artists use fire to show their power to make something." Kim isn't so much interested in demonstrating her power to make things as she is in responding to and channeling the sense of destiny and life energy that she feels surrounding her and defining her existence.

"I am so fortunate," Kim told me at the end of our call. As an artist, she is completely engaged in, and satisfied by the world that she continually creates. She speaks about her work as it each image is a part of her psyche, a moment of experience. "The movement, the colors, they are so calm and peaceful," she says: "They are my state of mind."