When this couple won the lottery, they decided to trade in a potential life of luxury for one that could benefit others.

Joe and Rhonda Meath of Bethel, Minnesota, won the Hot Lotto Jackpot, worth $11.7 million last weekend, according to MyFox9.com. The new millionaires don't plan on changing their lifestyles, however, and intend on maintaining their humble existence while giving a chunk of their winnings away to charity.

"I don't think it's going to change our life much. We just hope it doesn't change the people around us," Joe, a retiree, said, according to MyFox9.com. "We're easygoing. Laid-back. We like our family. We love dogs. We are just going to do what we do."

Rhonda, a waitress, says she will continue waiting tables at the Lake Elmo Inn, KSTP reported. "I have great friends here and a great boss, and it’s just really a fantastic place to work, so I have no plans of leaving."

The couple said that though they will set money aside for their four children and three grandchildren, they also have some charitable plans in mind. The Meaths said they would donate some of their winnings to the St. Paul Police K-9 Foundation. Rhonda, a volunteer at the organization, also said she'd donate a German shepherd in her father's name. The couple gave the store clerk who sold them the winning ticket, $15,000 to pay for college, according to the Star Tribune.

While the couple won't be living extravagantly, there are a few things the Meaths, who won the largest Hot Lotto jackpot in Minnesota, mentioned they will splurge on. Rhonda wishes to buy a dog-friendly Chevy Suburban, and Joe is entertaining the idea of buying an RV, the Star Tribune reported.

Though the Meaths are still processing their lottery win, they say they are ready to jump back into their usual routine.

"Have to still mow the grass and get mail and put grandkids on the school bus," Rhonda told ABC News.

$11 Million Lotto Winner Will Return To Waitressing, Donate Chunk To Charity
Spare Change: 5 Lottery Winners Who Made A Difference With Their Money 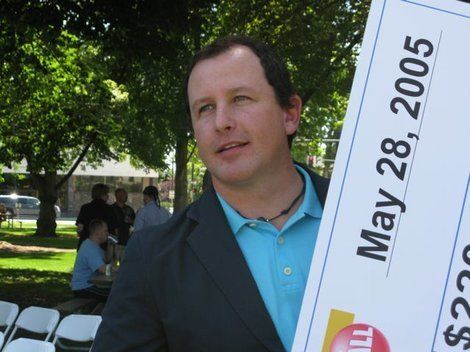