I'm a North Minneapolis Native. My family has been in North Minneapolis for 96 years. My maternal great-grandmother and her first cousin/sister (all black folk know what that relationship is and it needs no explanation) migrated, like many other southern black people in 1919, hoping to escape the ominous cloud of black life in their native Texas. Like The Great Migration in the early 20th Century, The Twin Cities had a bit of a bump in its scarce black population around the same time we saw a simultaneous pull of talent out of our communities and influx of crack related activity into our communities. My paternal uncles followed their oldest brother, my father, in the late 1970s and early 80s from Detroit to Minneapolis with a few stops along Interstate 94. North Minneapolis, and specifically the Near North neighborhoods (the Northside neighborhoods closest to downtown) which make up most of the black population in the city, is no different than most black communities. A once majority Jewish population ended up avariciously or inadvertently welcoming black folk in by moving out or over and becoming landlords. No matter how the children of the sun ended up in American Nordic country, all black folk in Minnesota learn of North Minneapolis' darker tint. 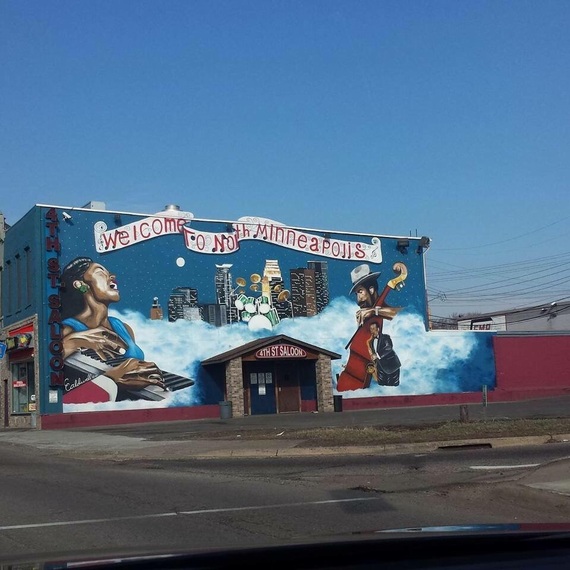 In a state with a less than seven percent black population, and most of that black population living within the Twin Cities, and most of that black population living within Central St. Paul and North Minneapolis, one can easily draw a definitive circular border around where most black people are in the state of Minnesota. It's a small circle and a close knit community because of it. In a relatively large city, the black community operates like a small town. Everyone knows everyone, and if no one knows you, then they know of your family. If no one knows your family, then you're not from there. Because of the familial feeling, Jamar Clark hits home very hard for me.

This feeling is one of frustration, anger, resentment, and heartache from going unheard, ignored, and voiceless for so, so long. Minnesota has long dealt with race in the most offensive way possible: paint everyone white by making the misnomer of "I don't see color" the unofficial state motto; tell everyone how lucky they are to live in a place where colorblindness runs deep; if people at all grow weary of such sociological farces, call them troublemaking racists and ignorant and without an open mind. A deafening inaudible tongue springs forth on both sides of the color line, usually black folk screaming and wondering how an entire group of people cannot see the blatant effort to carry on the subtlety of ignorance; while white people love playing the fool, often times completely dumbfounded, or even worse, actually know they are that way. This is not anecdotal hyperbole either. One look at the poverty rates, test scores, achievement gaps, and incarceration rates will point to a very clear picture of Minnesota's always high (if not the highest) ranking in the biggest disparity between white and black folks. Because of this stark contrast and unwavering blame game of most well-meaning white liberals in the state, the reality is that most native black people of MN turn inward to face the most difficult hurdles on life's obstacle course.

Although I haven't lived at home in over 16 years, I still only call one place home. Jamar Clark was likely disgustingly and most egregiously executed by government empowered police just a mere one and a half blocks away my community high school. This state sanctioned killing occurred hours after that same high school, led by one of my close friends and high school teammate at the same school, represented the entire city of Minneapolis in a state championship for football for the first time in over 35 years. The head coach, Charles Adams, is a third generation Minneapolis police officer as well. The same school that has always been the bedrock of the North Minneapolis community, had been threatened with dismantling and closing a mere four years ago when just 56 students were enrolled. Open Choice programs for high school and closing of historical feeder schools into the high school were the genesis of long talked about erasure attempts, and the advent of gentrification efforts. Just a few miles down the same street where the likely execution occurred, another #NFLer (Northside For Life as we affectionately call each other) turned NBA champion, Devean George, is partnering with an NFLer architecture firm (led by another high school teammate of mine, Jamil Ford), and together they are bringing much needed economic and housing development to the most blighted areas in MN.

Like Devean, Jamil, and Coach Adams, many sons of the soil stay connected and have become brand ambassadors for our beloved community. I've personally given many tours of Plymouth Ave. to visitors and new transplants where I like to point out that the Adinkra symbols that lace the trash receptacles along the street are signs to our own that even in this very white and very liberal state, we have a very real and ever pressing occupation in our community that needs appropriate signifying and symbolizing. The last time I was home, about six weeks ago, the trash can outside of the 4th Precinct (two blocks from the likely execution) still donned the West African Adinkra symbol, Akoben, a war horn. Akoben is used to symbolize a battle cry. We all have war stories to complement our battle cries Over North (what us natives call North Minneapolis). Devean has spoken of his publically as the catalyst for always wanting to come back and change our community for the good. Devean's little cousin, Byron Phillips, was an 11 year old boy who was murdered at his house not far from Jamar Clark. I lamented Byron in several poems I've written over the years. Byron Phillips is still a battle cry.

Byron Phillips is one of many stories of many killings at the hands of black folk in North Minneapolis. For the media in MN, and for the white liberals who consider covert and subtle racism the best tactics for pointing out the problems of our community--as a reason to prioritize the problems pressing from inside our community before those pressing from outside our community--this is as favorite of a pastime as hockey. The devilish dance of "but what about fixing yourself, "which is translated loosely into white people saying without saying (a paramount skill for Minnesota Nice) "you get what you deserve," will definitely fling its fancy footwork as the story of Jamar Clark becomes clearer. The police claim the execution was justified, they will now try to demonize Jamar Clark because he was being charged with assault of a woman. These misnomers deserve highlighting now in the middle of what could potentially be yet another Ferguson or Baltimore or Cleveland brewing soon. The reason for it is simple, Missouri, Ohio, and Maryland are not set forth for the nation to see examples of how white liberalism is the way to heal the land. Minnesota, the North Star State, indeed is, however. It is the shining example and guiding light for it. Yet white liberals are the most dangerous purveyors of racism, because they believe with all of their heart, that the "truths" they speak and think are void of the very racism they often purport.

North Minneapolis is no different than what Malcolm X once crystalized:

"as long as he is black and a member of the Negro community the white public thinks that the white policeman is justified in going in there and trampling on that man's civil rights and on that man's human rights.

Once the police have convinced the white public that the so-called Negro community is a criminal element, they can go in and question, brutalize, murder unarmed, innocent Negroes and the white public is gullible enough to back them up. This makes the Negro community a police state. This makes the Negro neighborhood a police state. It's the most heavily patrolled, it has more police in it than any other neighborhood, yet it has more crime in it than any other neighborhood. How can you have more cops and more crime? Why? It shows you that the cops must be in cahoots with the criminals."

We don't need the reminder of our battle cries and war stories; we remind ourselves of all threats, both foreign and domestic. We also know it's not relevant and does not justify this senseless killing at the hand of the government once again. If anything, the constant state terror that is present in black communities across this country is a reminder of Chief Justice Roger B. Taney's words about a black man who once tried to find solace in Minnesota, "Persons of African descent cannot be, nor were ever intended to be, citizens under the U.S. Constitution."