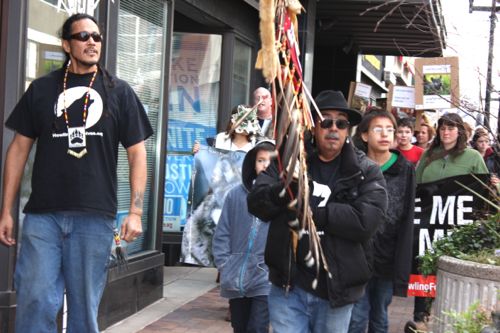 The crowd fighting the chilly winds of Lake Superior marched through downtown Duluth, Minnesota to protest the beginning of a controversial wolf-hunting season. Robert DesJarlait carried the Cherish the Children Eagle Staff as he and Niibiwi Misko Makwa lead several hundred supporters for Wolf Walk 2012. Designed like a shepherd's staff, the Eagle Staff is a powerful symbol, representing the stature and honor of a tribe. The honor of the Anishinaabe called them to come to the aid of their brother, the wolf.

Despite lawsuits and public opposition, wolf hunting began in Minnesota on November 3. The Minnesota Department of Natural Resources (DNR), with the full support of Minnesota Gov. Mark Dayton (D), offered 6,000 licenses to kill 400 wolves. As of now, 109 wolves are dead. 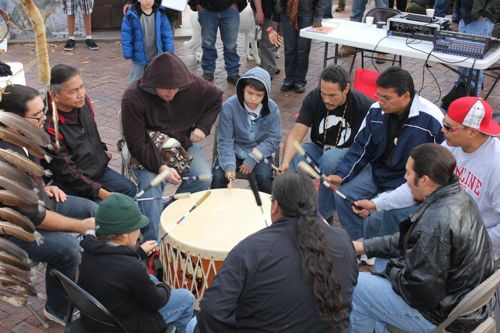 In a lawsuit filed on September 18, the Center for Biological Diversity and the group Howling for Wolves charged that the DNR failed to provide a formal opportunity for public comment. At issue is the fact that despite wolves being removed from the Federal register of endangered species in January 2012, Minnesota's 2001 wolf management plan requires that wolves not be hunted or trapped for five years after removal from the register.

The Minnesota state legislature passed a budget bill in 2011 that authorized the DNR to open wolf hunting after a period of public comment. Instead of opening a formal comment period, the department offered an online survey. Seventy-five percent of 7,351 responses opposed the hunt, which has been supported by Minnesota's substantial deer hunting lobby. Opponents say that the deer population is at least one million and that individual wolves kill 15 deer a year, usually sick or compromised individuals. Six thousand deer is an inconsequential amount, considering the total deer population.

In the end, the Minnesota wolf hunt prevailed despite all court challenges.

The dry scientific and legal facts offer fodder for heated discussion, but there is an important story of spiritual and moral imperative that has escaped media attention. This sacred story of creation belongs to Native peoples. In Minnesota, there are seven Anishinaabe (Chippewa, Ojibwe) reservations and four Dakota (Sioux). Understand that tribes retained these "reservations" after ceding original homelands to the United States through treaty agreements. The federal government did not "give" anything to the indigenous people. Most of the land was taken, treaties are under legal challenges, and for that reason, putting values and numbers on "acreage" is meaningless. And here it is where we must begin with the wolf, who is the heart center of the native peoples' creation story.

The Anishinaabe or Ojibwe creation story teaches that the original man, the Anishinaabeg, was "lonely and asked the Creator for a companion," says Reyna Crow of the Northwoods Wolf Alliance.

The Creator sent Wolf (Ma'iingan) to be the Peoples' companion and brother. Ma'iingan and Anishinaabeg were told to travel together and name everything in nature, including all of the plants and animals. After they did this, they returned to the Creator who told Wolf and Anishinaabeg that he would separate them. From now on they would forever walk apart from each other, but that they would live parallel lives. "WHAT HAPPENS TO ONE WILL ALSO BEFALL THE OTHER," the Creator said.

The final part of the creation narrative tells the People that Wolf felt badly that his human companions would be lonely without him. So, he gave his descendant, Dog (Animoosh), as a sacred gift. Now Dog is the Peoples' loyal and devoted companion, ensuring that there is no need to walk alone.

In the course of the brutal settlement of America, both the wolf and indigenous peoples were hunted, slaughtered, hated, and vilified as white culture bled across the tapestry of the land. Indeed, Wolf and the People are still walking parallel lives.

"If you take the fur of ma'iingan, you take the flesh off my back," says Robert DesJarlait, of the Red Lake Ojibwe-Anishinaabe Nation. DesJarlait is a writer, journalist, artist and a member of the University of Minnesota Council of Elders. DesJarlait "signs his works of art with the symbol of a wolf's paw to honor the historic and ancient connection between tribal people and wolves."

When legalizing the wolf hunt, the DNR did not consider the effect that the death of an alpha male or female might have on the cohesiveness of the pack, nor did scientists consider the fact that wolves mate for life. In fact the "public input" on the wolf hunt has been termed a "public relations exercise" by the DNR and the Democratic Legislature. "The DNR was under considerable pressure from lawmakers, livestock interests, hunting groups and others to get going with the hunt," according to an analysis in Minnpost.

The wolf knows no artificial boundaries or imaginary lines drawn on maps, but "reservation" boundaries are protected by law and may offer sanctuary and protection for at least a part of the threatened wolf population.

Red Lake Reservation did the same.

At their September 14 Tribal Council Meeting, the Red Lake Tribal Council voted to designate over 843,000 acres in eight Minnesota Counties as a "wolf sanctuary," where tribal laws supersede state laws and management.

The wolf represents a "minor" Clan of the Red Lake Band of Chippewa and the importance of wolves in Chippewa culture is highlighted in legends and oral history. Tribal Spiritual leaders and elders speak of the parallel fates of wolves and native people. Many believe that if wolves prosper, the people of Red Lake will prosper, and if wolf populations suffer, so will the Red Lake Nation.

Another component of this story is the lack of empathy for native populations. This deficiency is not new, but the wolf hunt brings this omission of respect for cultural history and significance to our attention. How is it possible that white lawmakers still do not work with indigenous peoples to help them recover from a brutal history by, at the very least, recognizing the sacred? The wolf hunt represents yet another theft of indigenous heritage and is a slap in the face to indigenous identity.

While trying to find the path to this narrative, I consulted with Nellis Kennedy-Howard, a friend and former contact at Honor the Earth. My question to her was, "What is the most important idea I can communicate?" Nellis was quick and firm in her reply:

For Native peoples, I can honestly say the need to highlight our voice. Ever heard of Church Rock uranium spill? No? How about Three Mile Island? Church Rock spill is this country's largest radioactive spill but no one heard about it. Why? Because it was on Indian land. Native peoples constantly have our voices silenced and our issues are not heard.

Nellis nailed it. The issue is not ignorance, but silence on the part of those that know the truth. And, all of us who have the power and the platform to tell these stories need to step up to the plate more often and with more compassion.

Perhaps the story of the wolf hunt is a sad beginning offering hope for a change in attitudes. One could ask the metaphysical question about the ultimate sacrifice of Wolf. The empathetic person might connect the sacrifice of Wolf to the Christian creation story -- one brother sacrificing everything for the other.

The challenge is to nurture compassion for all of creation. Does sport hunting in the guise of "management" make any sense at all when there are 3,000 wolves in Minnesota, recognizing that when they are eliminated below a population of 1,600 the killing will stop only to begin again when populations rise?

The harsh reality is that it is legal to hunt the wolf in Minnesota and this includes trapping in steel-jawed leg holds and using bait to lure wolves to the traps beginning November 24.

Ask yourselves: Is any part of this hunt moral, ethical, humane or steeped in empathy for indigenous peoples? If the answer is "no," then act.

This post has been modified from an earlier published version.