There are ample ways to scar your children for life while on a visit to New York City -- but seeing their most beloved cartoon characters fight, and then take their heads off, might take the cake.

The war between costumed characters and tourists in Times Square raged on this week, as Minnie Mouse and Hello Kitty were arrested on Thursday for fighting each other. The New York Daily News identified them as Sandra Mocha, 34, of Queens, and Giovanna Melendez, 40, of New Jersey, and reported that the spat was over tips.

Twitter user Jake Rullman snapped photos of Minnie -- without her mousy mask on -- getting cuffed:

Minnie Mouse and Hello Kitty got arrested. The mascots had to pull together and have a family meeting. pic.twitter.com/uwp6R1L1nf

The pair were charged with assault, and as Gothamist points out, probably ensured "a thickening of child therapists' wallets nationwide."

If you weren't already aware, most of the costumed characters in Manhattan aren't sanctioned by the city, or by any business. They're just regular folk trying to make a buck. According to The New York Times, they've been fighting with the city for years for the right to accept -- and, in some cases, demand -- tips for photos. The New York City Council has also been pushing to get characters fingerprinted, as well as to have them pay up to $170 for a two-year license in order to accept tips.

Meanwhile, there's a constant civil war going on between many of the characters, as they battle for territory and tourists' wallets. In 2013, a New York Post reporter tried to join their ranks as an undercover Winnie the Pooh, and the response wasn't exactly friendly. 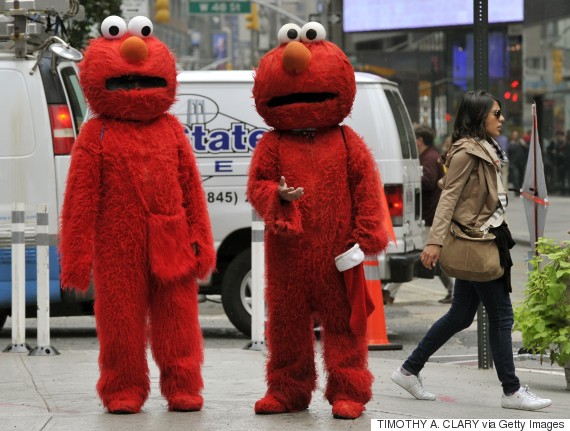 "A dangerous character could be hiding in a cuddly character," New York Council member Peter Vallone said in 2013, after a costumed Elmo was jailed for allegedly trying to extort $2 million from the Girl Scouts of the USA.

In one of the most famous cases of bad character in Times Square, a man dressed as Spider-Man punched a police officer.

That said, most of the characters are honest people whose daily interactions with tourists are civil. Yahoo News introduced a number of the people behind the masks in a video late last year.

"Most of us are just trying to make a living," said Edwin Garcia, an Elmo who supports a wife and 7-month-old daughter in New Jersey.