Studies have consistently shown that compared to their white counterparts, minority students are less likely to graduate high school on time or receive any form of higher education, and more likely to drop out of high school.

While some experts point to methods for closing achievement gaps and enhancing the performance of the bottom 5 percent of schools and students by way of legislation and policy, a new report out by the Public Education Network examines the role of the parent.

Whereas just 37 percent of the general public considers schools in their communities -- versus schools in other areas -- as examples of institutions needing reform, about 70 percent of black and Latino parents point to those in their neighborhoods.

But most notable in these findings is perhaps that although these parents wish for improved public education in their communities, they see themselves as the ones responsible for ensuring their children's academic success. More than two-thirds of those surveyed blame parents and home life -- rather than the school systems, teachers and government -- for the high rates of high school dropouts and low rates of college completion. 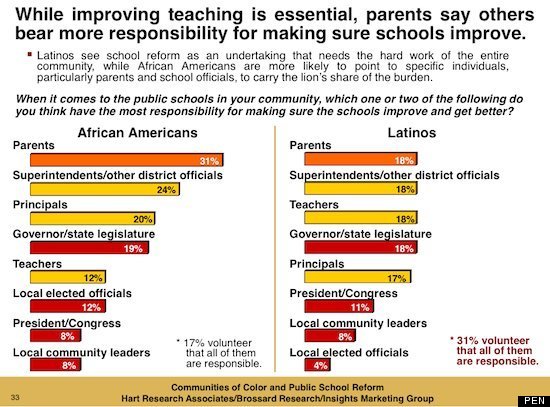 And as these parents express the need for change in their community schools, the findings report that minority parents are also highly committed to their children's education: 91 percent of Latino parents and 86 percent of African-American parents said it is "quite" or "extremely" important to them that their child attends and graduates from college. But the study also found that while parents think their schools are consistently underfunded -- thus undercutting quality and equal education opportunities for their children -- and they recognize a clear need for school reform, parents are generally unaware that there is a larger public school reform movement for them to support, or that it seeks their support.

"However, because these parents and caregivers overwhelmingly already share aspirational goals of a strong education and college degree for their children, there is a marked opening to engage parents in a collective, coordinated education reform effort that would empower them to hold the educational system accountable as more effective and inclusive reforms and innovations are developed and implemented," the researchers write. 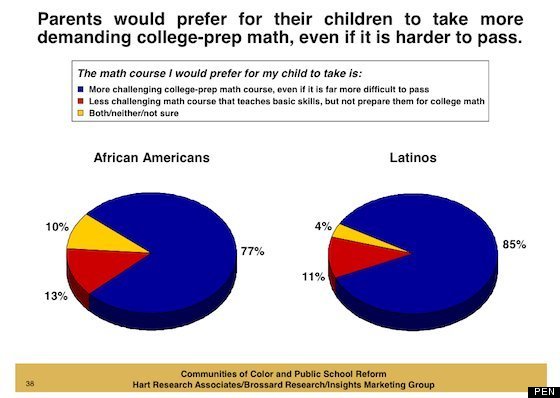 Parents were also found to have a desire for teacher to "do a better job helping students," measuring a teacher's success by the amount of time and attention put into nurturing students moreso than student performance on standardized exams, and were more concerned with helping teachers improve versus removing bad educators.

In Native American communities, parents seek respect from schools -- as they reported continual mistrust toward the system because they were failed or mistreated as students. Southeast Asian parents expressed challenges in communication through language barriers and don't feel empowered to help their children reach high academic goals.

Overall, minority parents felt that their children are being shortchanged in public education because white students receive a better education and have better teachers. They also believe that higher expectations and standards would improve their children's quality of education, but greater resources are needed. As it stands, parents say that high standards combined with lacking resources set their children up for failure. Minority parents also cite poverty as a key factor in poor educational performance.

Researchers suggest "immediate and substantive action" to involve parents in reform movements, who according to survey results, are committed to and interested in taking part in assisting their children attain higher education and academic success.

This large discrepancy between minority teachers and minority students can be attributable to low graduation rates among many minority groups, according to the report. While high school graduation is a minimum requirement for the teaching profession, just over half of black, Latino and Native American students finish high school. College entrance and completion rates are similarly low -- with only 56 percent of black students and 64 percent of Latino high school graduates going on to college. Less than half of both black and Latino students finished college in 2007.

The high cost of college also drives many minority students away from pursuing higher education. The PEN report showed that parents are more concerned about not being able to afford college than about schools not preparing their children.