Black and Latino students are disproportionately more likely to experience harsher punishments by schools for infractions and misbehaviors, according to a new report by the National Education Policy Center.

At times, the punishments are unrelated to student safety. While past research has suggested that zero-tolerance discipline that removes troublemakers can improve the learning environment for and safety of well behaved students, the NEPC reports that it's not necessarily the case. A 2004 study in Indiana showed that most suspensions -- 95 percent -- were issued for violations like disruptive behavior, while just 5 percent of suspensions were for dangerous behavior like weapons possession.

The report was issued today as part of the Dignity in Schools Campaign's National Week of Action. It's authored by Daniel Losen, senior education law and policy associate for the Civil Rights Project at the University of California, Los Angeles.

“Although our society is more diverse than ever before, schools today are more segregated than they were 30 years ago," NEPC Director Kevin Welner said in a statement Wednesday. "It’s important to understand the link between diversity, discipline and academic achievement…. being kicked-out leads to becoming a dropout.” 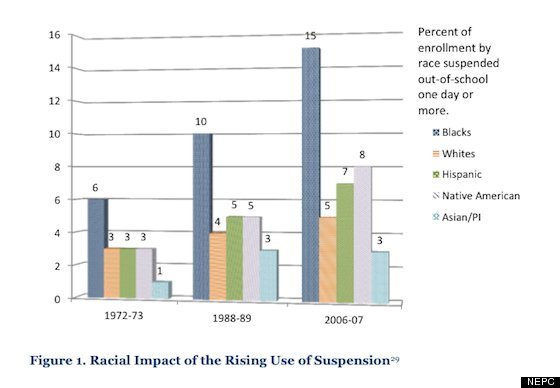 The report, "Discipline Policies, Successful Schools, and Racial Justice," points to a case where disruptive students were removed from a classroom, but in the wake of their departure, "other children who had not been particularly disruptive had emerged as major behavior problems."

To add to that, students are at greater risk of dropping out of school if they have been punished, and those who are punished with out-of-class strategies pay for it even more with missed educational opportunities.

Since the 1970s, the incidence of school suspensions has risen steadily while racial disparities have also increased. The report also reveals that racial disciplinary disparities exist, and have risen, among students with disabilities.

But Rosen also found that higher suspension rates are not clearly correlated to more frequent or more serious behavioral violations. In the report, he points to studies that show white students are more subject to punishment for less subjective violations, while black students are "disproportionately called out" for offenses that require a teacher's assessment. In North Carolina, for example, first-time offenders who were black students were more likely to be suspended for minor offenses -- like using cell phones, being disruptive or publicly displaying affection -- than their white counterparts.

The disparity in punishments across races lacks a clear reason, but Losen suggests that unconscious bias is a likely cause, Education Week reports.

"I think there is a growing movement to say, 'Wait a minute, we can do better,'" Losen told USA Today. "Suspending kids right and left for minor offenses is not a sound educational policy."

Although the U.S. Department of Education had yet to review Losen's report, DOE spokesman Justin Hamilton told USA Today that the department is seriously considering all reports regarding disciplinary policies and educational opportunities for all students.

Losen notes in his report that it's premature to determine that suspension is a direct cause for poor performance or dropout rates, and there is currently no obvious "best" disciplinary system. Still, the research does not support the theory of suspensions and expulsions for non-violent and minor infractions, as they are more associated with negative results and better alternatives exist.

This report, which is accompanied by a companion brief that offers statutory changes in line with the recommendations and resource sheets, echos a previous study released in July that revealed more than half of Texas students had been suspended or expelled between 7th and 12th grades -- igniting a debate around whether the state's disciplinary system was actually getting the results they intended. Of the students who had faced suspensions or expulsions, 15 percent had seen disciplinary action 11 times or more, and almost half of those students had been involved in the juvenile justice system.

A few days after that report was issued, U.S. Secretary of Education Arne Duncan and Attorney General Eric Holder rolled out a federal initiative aimed to curb the "school-to-prison" pipeline that begins with in-school disciplinary action, leading to the justice system.

School officials in Colorado are also reviewing "regimented" school disciplinary policies that hit students with ticketing or charges for minor infractions like doodling on a desk. In Chicago, students have rallied support to appeal disciplinary regulations that sent a student to the police station for writing his name on a desk and suspended others for bringing cell phones to school or not wearing parts of their uniforms.