Eric and Tammy Koz always wanted to be parents. So when the young couple found out they were pregnant with a little girl in 2003 after a devastating miscarriage, they were beyond thrilled.

“I was ecstatic,” Tammy told “The Oprah Show” in 2004. “I had a very positive outlook on the pregnancy. I think I’m probably the only one that did...”

The reason many were fearful, Tammy explained back then, was due to her having lupus, an autoimmune disease that increased her risk of miscarriage. Yet, this particular pregnancy was going smoothly ― until 19 weeks, when a routine ultrasound revealed that Baby Zoe wasn’t growing at the rate she should have been. Dr. Julie Jensen presented the Koz family with two options.

“We said we could deliver at that point; her survivability was quoted at basically zero percent,” Dr. Jenson said. “The other option was to try to get her to 27 weeks and then deliver her with a survivability probably still under the 5 percent number.”

Eric and Tammy chose the latter, and Tammy was put on bedrest. She reported to the hospital every other day to see if Zoe was still alive.

“You take a big, deep breath and you prepare yourself that there’s no going to be a heartbeat today,” Tammy said through tears. “Every time, there was a heartbeat.”

At 27 weeks, Tammy delivered Zoe by C-section. The baby weighed 10.8 ounces ― just over half a pound ― and was one of the smallest babies born in the U.S. to survive. Zoe may have been small, but the doctor who delivered her was the first to get a sense of the infant’s feisty personality. “I didn’t know what I would find,” Dr. Jensen said. “When Zoe came out and kicked me, it was just unbelievable.”

Today, Zoe is an active and outgoing teenager attending middle school in Plainfield, Ill. It’s a life her parents had hoped for, but one that they were perhaps too frightened to imagine 13 years ago, as they tell “Oprah: Where Are They Now?”

“Were there negative thoughts that we thought? Yes,” dad Eric says. “I was curious if I was signing a birth certificate and a death certificate. I was worried about those things. A lot of guessing.”

The uncertainty was extremely difficult for Eric and Tammy, but Zoe was a fighter. “I gathered my strength from her, from the experience that she was going through to fight to live,” Tammy says. “When you’re in a situation where you don’t have any other choice but to be strong, you just have to be strong.”

Zoe spent five months in the NICU before she could go home with her parents. “She was a little over five months old and she weighed 6 pounds, 2 ounces,” Tammy recalls. “Which is the birth weight of her little sister.”

Though no one was sure what to expect from Zoe, she continues to amaze both her family and her doctors. “Zoe has blown their mind,” Tammy says. “Every visit she goes to, the doctors just can’t believe how amazing she’s doing.”

Beyond hearing aids, glasses and slightly shorter stature than her peers, Zoe is just another healthy seventh-grader.

“She’s growing, too, and she’s blending right in,” Eric says. “She’s not skipping a beat.”

Another baby who defied the odds:

PHOTO GALLERY
Former Preemies Pose With Pictures Of Themselves As Babies

OWN Video Where Are They Now? Pop of Culture Pregnancy Miscarriage 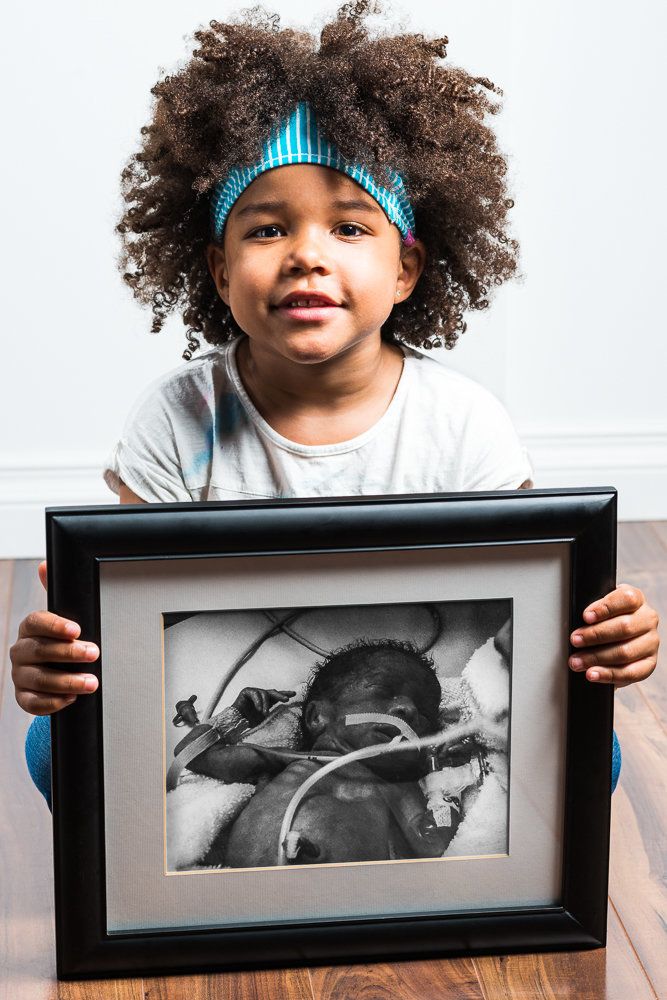