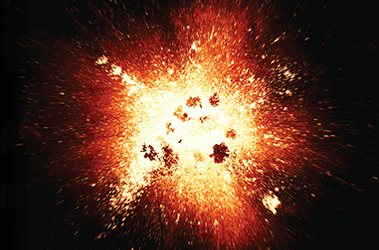 A miracle suggests divine intervention in human affairs. Many of us tend to think that believing in miracles is unscientific. But it is science that has proved the existence of miracles, and it is because of a miracle, that we humans live and breathe on planet Earth

Fred Hoyle (2015-2001), the atheist-turned-agnostic astronomer, is responsible for coining the term the Big Bang, the explosion that created the universe. Hoyle's data revealed that the highly ordered event could not have occurred by random chance. His atheism was "greatly shaken" at these developments and he said, "A common sense interpretation of the facts suggests that a super-intellect has monkey-ed with physics." In spite of his observations, he remained an agnostic, a skeptic, who resisted the idea that the entire universe had been created de novo; instead he held on to a limited notion that only stars had been created from nothing.

Other scientists, according to an article by Eric Metaxas in the Wall Street Journal, believe that the evidence of God's existence may be irrefutable. The theoretical physicist Paul Davies has said that "the appearance of design is overwhelming," and Oxford professor Dr. John Lennox said "the more we get to know about our universe, the more the hypothesis that there is a Creator . . . gains in credibility as the best explanation of why we are here."

The writer C.S. Lewis, who, influenced by his friend J.R.R.Tolkien, changed from an atheist to a Christian, explained that a miracle is something unique that breaks a pattern so expected and established we hardly consider that it could be broken. In his 1947 Miracles, he wrote, "Men became scientific because they expected law in nature and they expected law in nature because they believed in a lawgiver." That is why most of the great founding fathers of modern science believed in an order. Scientists, a few of which include Galileo (astronomy), Newton (calculus), Mendel (genetics) and Einstein (physics), were convinced that an order existed and pursued the search for it. In essence, science is the discovery or clarification of an order that reveals God in nature.

In a New York Times article, Dr. Jacalyn Duffin, a physician and author of Medical Miracles and Medical Saints, summarized her experience with miracles. As a physician, she was asked by an ecclesiastical tribunal to review a slide of a blood sample. Only after she read the slide was she told that the specimen belonged to a woman she had treated many years ago for a fatal illness. The patient had recovered after praying to Marie-Marguerite d'Youville (1701-77), the founder of the Order of Sisters of Charity of Montreal and a candidate to become the first Canadian-born saint. When Duffin affirmed that the patient's recovery could not be explained by science, but indeed transcended scientific understanding, it was declared a miracle and d'Youville achieved sainthood.

Curious about miracles after this experience, Dr. Duffin spent hours in the Vatican archives, examining more than 1400 miracle investigations from 1588 and 1999. She discovered that opinions of doctors detailing treatment and testimony was a critical part of the canonization process. Medicine is regarded as a manifestation of God's work on earth. To be declared a miracle, a person has to be sick and dying in spite of having received treatment.

Dr. Duffin notes the parallels between medicine and religion. Both systems are based on evolving beliefs. Medicine is rooted in natural explanations and causes while religion is defined by the supernatural and the possibility of transcendence. Both address our plight as suffering mortals. Medicine helps to postpone death and relieve symptoms, while religion attempts to console us and reconcile us to pain and loss.

Given that miracles exist then, why are many of us skeptical or resistant? I think we fear that we have something to loose-- that we'll be judged or have to give up a sense of control or power or free will. In actual fact, as Dr. Duffin substantiates, we have something to gain-two avenues instead of one- to heal and ease pain and suffering. If we open ourselves to the healing of medicine, prayer and miracles, we may be more likely to be healed.

In my next blog, I'll discuss how by observing nature's laws in our daily lives, we can open ourselves to miracles.

Conclusion: Although miracles may not be an everyday occurrence, we benefit from keeping an open mind toward the phenomenon of the mysterious, inexplicable aspect of human reality.