Rula Jebreal, whose autobiographical novel inspired Julian Schnabel's film Miral, condemns violence by Israelis and Palestinians, quotes Yitzhak Rabin, and is dedicated to peace. So why did the Israeli Government, the American Jewish Congress and the Anti-Defamation League try to stop the film's premiere at the United Nations?

It's not often that a movie's theatrical release is an historic moment. But Miral, which opens today in LA and NYC, is the first Hollywood film to look at the Israeli-Palestinian conflict through the eyes of Palestinians, Palestinian women, at that. The film is based on the autobiographical novel of Rula Jebreal, the Palestinian journalist, who was born in Haifa, raised in East Jerusalem, has lived in the Middle East, Europe and, most recently, New York. Directed by the New York-based Jewish-American artist and filmmaker Julian Schnabel, Miral offers glimpses of history, as experienced by Palestinian women, starting with the formation of Israel and ending with the Oslo Accords. It premiered at the UN's General Assembly, on March 14th, drawing stars from Robert de Niro to Sean Penn, along with a storm of protest.

Schnabel's Jewish credentials are true blue--and white. His mother was the President of the Brooklyn Chapter of Haddassah, the Women's Zionist Organization, in 1948, during the establishment of Israel as a state. Schnabel recalls seeing Exodus at Manhattan's Rivoli Theater with his parents: "Everybody stood up when they sang 'Hatikvah,' and put their hands on their chests. My mother and father were very proud." But Schnabel's history and his film's vision mattered little to the film's critics. Seeing the movie, in fact, mattered little to the Israeli Government, the American Jewish Congress and the Anti-Defamation League, who, on principle, (unsuccessfully) called on the UN to cancel its March 14th screening.

This week, days before Miral's release, I talked to Rula Jebreal about her life, her story, the film, violence, and her optimism for a peaceful future for Israelis and Palestinians alike.

Katie Halper: Were you surprised by the response of the Israeli government and by American Jewish organizations like the AJC and the ADL?

Rula Jebreal: No, not at all. No, no, no, no. Absolutely not. No, no, no, no. After every screening, I see the fear in people's eyes. This is their censorship response, their way of avoiding the truth. The movie is really about one thing: peace. And I'm not sure this is on their agenda. I'm more dangerous than Hamas. Hamas responds in such a stupid way--with violence. But people like me--artists, writers, intellectuals, journalists--raise awareness and consciousness. You can't label them as the enemy. These are the people that build bridges.

KH: When I saw the film I kept waiting for something that people could construe as anti-Israeli or anti-Semitic, which is the charge made by the film's most vocal critics, sadly without even seeing the film. But what I saw was a film filled with thoughtfulness and sensitivity. It certainly challenges the idea that we hear all the time--that all Palestinians hate all Jews.

RJ: I have to thank you very much for this interview. Many people shy away from interviewing a Palestinian. They avoid talking to me. In this country where there is supposed to be so much freedom of expression, there is still a fear of considering a certain perspective.

I know what is important and that is telling stories. What I'm interested in is telling the story of civil society in war time. What are the implications of war on women in terms of security, in terms of freedom, in terms of sexual harassment? I think all of that is breaking the wall of silence. I know that's not easy. The fact that in America, the land of freedom of expression, I see this concern, this fear of considering that point of view, makes me think there's an issue here that needs to be addressed. There are always two sides to every story, and if we don't listen to each other, how can we find a solution? This culture of demonization has been creating more violence.

KH: You collaborated with a director who is Jewish. So much for your being an Anti-Semite. But I guess there are those who can't believe a Jew and a Palestinian can or should work together. Or more specifically, what kind of Jew would work with a Palestinian?

RJ: Julian and I have the same values and both of us are very critical of what's going on around us, including in our own communities. We believe in respect and human rights. I reject violence. I think that killing Israelis is a tragedy. It's like killing our own people. Some of my own people say to me, "but they kill our people" and I say, "but it isn't right." Julian is on the same page. He always says he doesn't belong to any groups. He is only accountable to his conscience. It's the same with me. When I go to bed I want to feel like whatever action I did was right. Not because I'm on this side or the other side. At the end of the day we are all human. And working with him was really inspiring because I saw my own country through his mother's eyes, because he told me about how she saw it. I understood how much American Jews love Israel and care about it. I knew Israelis love their country but I didn't know how American Jews related to it.

KH: Are you ever accused of "selling out" because you condemn violence on both sides? Because, as you just said, you're critical of elements in your own community?

RJ: Yes. There are people like this on both sides of the issue. Ultimately, they are the same people. They don't realize that they are only helping each other by doing things that the other side can point to as a justification for whatever it does. And it is a cycle. So their accusations don't touch me. These people don't touch me

KH: How do you feel about the future for Israelis and Palestinians?

RJ: I'm very optimistic. I lived in Europe for a long time. Look at Europe, where there's freedom of expression, democracy, stability. Think about it 50 years ago. There was dictatorship, destruction, genocide, no economy, no human or civil rights. If that can happen in Europe, then that can happen everywhere. That can happen in our country and more than ever today because the Arab revolution is showing that people are ready to be protagonists in their own future. They are engaging in non-violent, democratic protests, asking for reform and change. They didn't call for a war; they didn't have anti-American or anti-Israeli slogans. What you hear from millions of young people in the streets is, "we want freedom, We want to live with dignity." That's a great sign and that's what we need to listen to.

KH: So your detractors in certain quarters of American Judaism are telling Jews not to see Miral. You obviously disagree. What would you tell Jews about why they should see Miral?

RJ:This film is a cry for peace. This film is against violence, wherever violence comes from. Whether it's from an Israeli soldier, a Palestinian militant, a Palestinian woman--it's wrong. It's immoral. It's killing our own country. The film is a story about love and education. It's a true story. I'm a real believer that we both deserve peace and stability. And that's only possible if we listen to each and talk to each other. It will come not through demonizing and criminalizing each other but through understanding. The example of Nelson Mandela is incredible because he left jail and didn't say, "kill all the white people." He called for forgiveness. He said are we ready to forgive each other and move forward? Are we ready to look at each face to face and not from behind guns? Are we ready to consider the others' pain as our pain and the others' blood as our own blood, to work together and try to build a bridge? Or are we going to condemn our children to live what we lived?

What is happening is tragic. What happened in Itamar [the settlement where earlier this month a family was killed while they slept. though the latest suspect is an Asian worker] is tragic, what happened [with the most recent air strikes, which have killed civilians, including children] in Gaza is tragic; what happened this morning [the bombing of an Israeli bus station] is tragic. Violence is tragic, and it's destroying our country. Violence is immoral. And it has to be stopped. Violence is the only language that has been used for 63 years. It's time to change course and to evolve and use other languages and other methods. You cannot stop killing by killing other people. We cannot continue this dysfunctional cycle. Everyone needs to see that. Rabin used to say: "I go on with the negotiations like there's no terrorist attacks." You need to show that there's diplomacy. If you don't show that there's diplomacy, if you only speak through a military language, you empower extremists. How can you hear words when there are bombs? How can you hear stories? How can you understand people and culture? It is impossible because the sound of violence drowns out everything else.

Come and see this other point of view. See the other side that you don't ever see, because the news only covers violence. 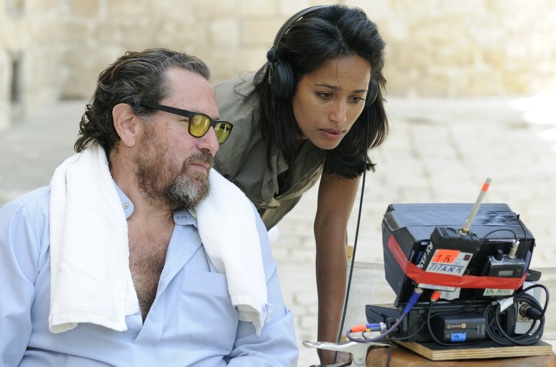