Miranda Kerr opens up about her sex life in British GQ's May 2014 issue and hints at a more fluid approach to her sexuality.

“I appreciate both men and women," Kerr tells British GQ. "I love the female body and truly appreciate the female form. I really enjoy sketching women, especially their backs. I definitely need a man in the bedroom, however –- a nice strong chest to lie on. Still, I want to explore. Never say never.”

The 30-year-old Victoria's Secret supermodel, who announced her split from husband Orlando Bloom last October, says age has brought on more self-assurance in the bedroom.

"The older I get, the more confident I am about asking for things I enjoy," she tells the mag. "One thing I’ve noticed is now that I’m having less sex my body isn’t as toned. The more sex I have, the more defined my arms and stomach get. Orlando and I always had great chemistry. One-night stands aren’t my thing. I made Orlando wait for six months until I even kissed him. I always ask for a critique on my performance. I always want to better myself in every way.”

Kerr is not the only female celebrity to openly discuss her sexuality recently. Cameron Diaz spoke about her same-sex attraction in an interview with Glamour UK for the mag's May 2014 issue.

"I think women are beautiful - absolutely beautiful," she said. "And I think that all women have been sexually attracted to another woman at some point. It's natural to have a connectivity and an appreciation for the beauty of other women."

Read Kerr's full interview in the May 2014 issue of British GQ, out Thursday. 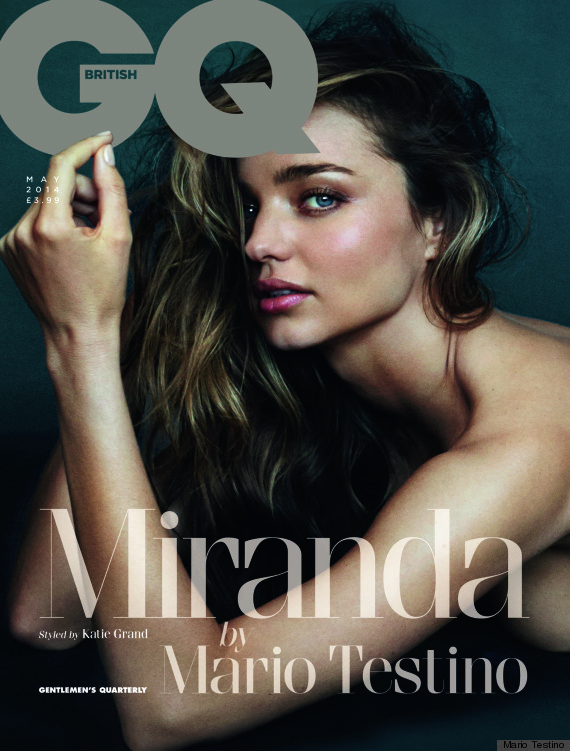 In a 2011 Esquire interview, Megan Fox confirmed her bisexuality, stating, "I think people are born bisexual and then make subconscious choices based on the pressures of society. I have no question in my mind about being bisexual. But I'm also a hypocrite: I would never date a girl who was bisexual, because that means they also sleep with men, and men are so dirty that I'd never want to sleep with a girl who had slept with a man."

The Green Day front man opened up about his sexuality in a 1995 interview with The Advocate: "I think I've always been bisexual. I mean, it's something that I've always been interested in. I think everybody kind of fantasizes about the same sex. I think people are born bisexual, and it's just that our parents and society kind of veer us off into this feeling of 'Oh, I can't.' They say it's taboo. It's ingrained in our heads that it's bad, when it's not bad at all. It's a very beautiful thing."

Comedian Margaret Cho has long been open about her sexuality. In August 2013, Cho discussed the semantics surrounding her open marriage to artist Al Ridenour, saying that she's "technically not able to stay with one person sexually because I’m bisexual,” and joking that she just “can’t stop up that hole.” She also identifies as queer, and opened up about her sexuality in an interview with HuffPost Gay Voices Editor-At-Large Michelangelo Signorile.

Twice-married record executive and music mogul Clive Davis came out as bisexual in his 2013 memoir, The Soundtrack Of My Life. Davis opened up about two long-term relationships he had with men after his divorce from his second wife.

5
Anna Paquin
Getty
Anna Paquin is adamantly open about her bisexuality. The actress told "Zooey" magazine in a 2009 interview, "For me, it’s not really an issue because I’m someone who believes being bisexual is actually a thing. It’s not made up. It’s not a lack of decision."
6
Megan Mullally
AP
After telling The Advocate in 1999 that she was bisexual, Mullally clarified her statements in an interview with Queerty, telling the blog: "I said that I thought that everybody is innately bisexual. I think there are different levels of awareness attached to that, so I may believe that everybody is innately bisexual, but somebody who is very homophobic may not see that quality in themselves in any way, shape or form. That’s on a very philosophical or even metaphysical level, you know what I mean? It’s not something that I think people are ready for yet. I think if you ask the average guy on the street if he was innately bisexual, he’d be like, ‘What the fuck are you talking about?’ and then he’d punch you in the face. So, we’re not quite there."
7
Azealia Banks
Getty
The rapper has been openly bisexual since the early days of her career: "I mean, I'm bisexual, so it makes sense. But I don't want to be that girl who says all gays necessarily hang out together, of course! I have people say to me, 'Oh wow, my friend is gay, too,' and I'm like, 'Yeah, so?'"
8
Andy Dick
AP
Many people mistakenly assume that Andy Dick identifies as gay. However, he told The Washington Post in a 2006 interview that, "just because I've been with guys, and I'm bi, doesn't mean I'm gay."
9
Bai Ling
Getty

Actress Bai Ling is openly bisexual -- and the identity category has often provided some humorous mix-ups involving her first name. According to GLAAD, she discussed it in-depth in a 2009 interview with Entertainment Weekly: "[A]t first when I was in the United States I didn't always have an interpreter in interviews and I didn't speak English so well. There was some confusion. My name is pronounced 'bi,' so when I was asked, 'Are you bi?' I said, 'Yes, I am Bai.' Do you like men? 'Of course!' Do you like women? 'Why yes!' And later I found out what that means and I said, 'Sure, I am bi!' But I think the interpreters and the reporters thought that I didn't know what I was saying because I was so open about it. They were uncomfortable about it. Such a thing is not important for me."

The "Portlandia" star and former guitarist and vocalist for Sleater-Kinney is often assumed to identify as gay. However, she told "Willamette Week" in 2012 that, "It’s weird, because no one’s actually ever asked me. People just always assume, like, you’re this or that. It’s like, ‘OK. I’m bisexual.’”

The star of "Here Comes Honey Boo Boo" revealed that she's bisexual in an "Inside Edition" interview in April 2015. Her daughter "Pumpkin" Lauryn Thompson also came out as bi at the same time.