Law enforcement officers have confirmed the identity of the woman shot by police outside the Capitol building on Thursday.

The woman who attempted to drive through White House barriers and set off a Capitol Hill police chase was identified as 34-year-old Miriam Carey of Stamford, Conn.

According to ABC News, Carey had a history of mental health issues and suffered from post-partum depression.

The suspect's sister, Amy Carey, was in disbelief when she told The Washington Post, “That’s impossible. She works, she holds a job."

Miriam Carey has been identified by authorities as a dental hygienist in Connecticut.

Former boss Dr. Barry J. Weiss told The New York Times that he and his partner fired Miriam Carey from their periodontics practice last year and cited her "temper" but would not go into detail.

The Times describes the final moments before Carey was killed:

Ms. Carey managed to get out of the car, and was shot by several officers. According to a law enforcement official, she was not armed, and it was not known whether she presented an immediate danger.

WASHINGTON — WASHINGTON (AP) — A woman with a year-old child led Secret Service and police on a harrowing car chase from the White House past the Capitol Thursday, attempting to penetrate the security barriers at both national landmarks before she was shot to death, police said. The child survived.

"I'm pretty confident this was not an accident," said Metropolitan Police Chief Cathy Lanier. Still, Capitol Police said there appeared to be no terrorist link. The woman apparently was unarmed.

Tourists, congressional staff and even some senators watched as a caravan of law enforcement vehicles chase a black Infiniti with Connecticut license plates down Constitution Avenue outside the Capitol. House and Senate lawmakers, inside debating how to end a government shutdown, briefly shuttered their chambers as Capitol Police shut down the building.

The woman's car at one point had been surrounded by police cars and she managed to escape, careening around a traffic circle and past the north side of the Capitol. Video shot by a TV camerman showed police pointing firearms at her car before she rammed a Secret Service vehicle and continued driving. Lanier said police shot and killed her a block northeast of the historic building.

One Secret Service member and a 23-year veteran of the Capitol Police were injured. Officials said they are in good condition and expected to recover.

"This appears to be an isolated, singular matter, with, at this point, no nexus to terrorism," said Capitol Police Chief Kim Dine.

The pursuit began when the car sped onto a driveway leading to the White House, over a set of lowered barricades. When the driver couldn't get through a second barrier, she spun the car in the opposite direction, flipping a Secret Service officer over the hood of the car as she sped away, said B.J. Campbell, a tourist from Portland, Ore.

Then the chase began.

"The car was trying to get away. But it was going over the median and over the curb," said Matthew Coursen, who was watching from a cab window when the Infiniti sped by him. "The car got boxed in and that's when I saw an officer of some kind draw his weapon and fire shots into the car."

Police shot and killed the driver just outside the Hart Senate Office Building, where many senators have their offices. Dine said an officer took the child from the car to a hospital. She is in good condition under protective custody, officials said.

A few senators between the Capitol and their office buildings said they heard the shots.

"We heard three, four, five pops," said Sen. Bob Casey, D-Pa. Police ordered Casey and nearby tourists to crouch behind a car for protection, then hustled everyone into the Capitol.

Others witnessed the incident, too.

"There were multiple shots fired and the air was filled with gunpowder," said Berin Szoka, whose office at a technology think tank overlooks the shooting scene.

The shooting comes two weeks after a mentally disturbed employee terrorized the Navy Yard with a shotgun, leaving 13 people dead including the gunman.

Capitol Police on the plaza around the Capitol said they were working without pay as the result of the shutdown.

This story has been updated to provide additional information on Carey. 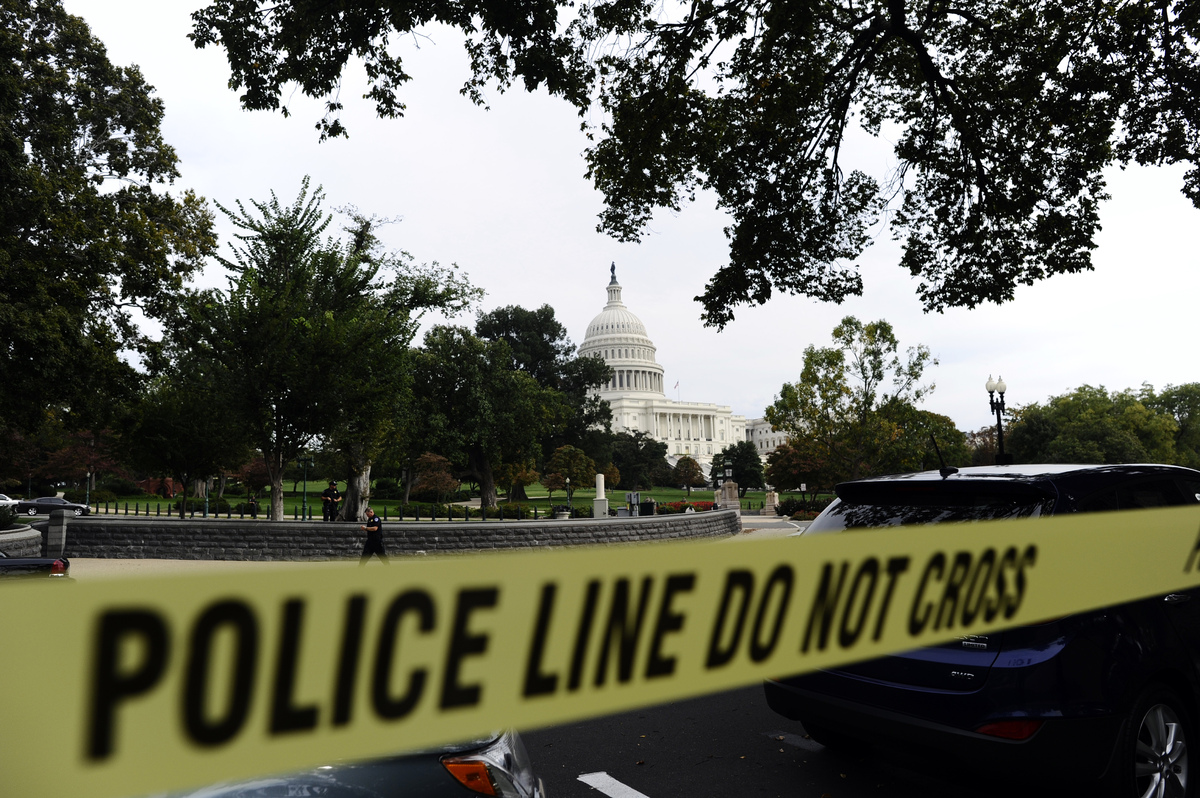