Famed Italian neuroscientist Vittorio Gallese, one of the discoverers of "mirror neurons", straddles many fields of knowledge in his pioneering research. An opera fan as well as neuroscientist, he has collaborated with some of the greatest luminaries in the humanities, from linguist George Lakoff to English professor Hannah Wojciehowski, to create a new "neurohumanistic" approach to academic studies: one which puts the human being at the center once more, in a revolutionary turn from the semiotic and narrative approaches of the past century. By using neurons to understand why, let's say, we enjoy reading literature, it is a way, Gallese explains, to bring back the study of literature to what is important: you.

His latest interdisciplinary connection: mirror neurons and cinema. Why is it that we become so immersed when watching a film? What goes on inside our brains to create this empathetic connection with the screen?

I met Vittorio Gallese in his native Parma, Italy, along with his younger colleague, Michele Guerra, a researcher in the cinema department, with whom he is now writing a book on film spectatorship. 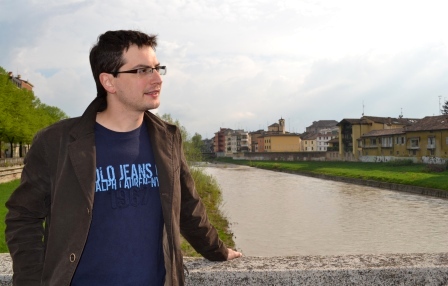 "Vittorio is very unusual," the younger colleague told me en route to Gallese's office in the outskirts of this charming town, replete with cobblestoned streets and its own Battistero. "He wants to collaborate with people outside his field. I started working with him four years ago when, inspired by his work, I wrote him an email. To my surprise, this famous man responded warmly--and suggested brainstorming on a project together." His voice rose with enthusiasm. "This does not happen often in academics!"

Michele Guerra was so inspired by his work with Gallese that his own work took an impassioned new route: formerly an Art History PhD student, who wrote on Stanley Kubrick as well as Italian film history, he went on to participate one summer in a Stanford think tank CASBS on "neuroscience for the humanities". For him, Gallese's notion of mirror neurons opened up an entirely new way to see cinema: what he and Gallese call "the embodied simulation" approach (ES). It is our body that is at the movies: our body in the complete sense of the word, with its motor-sensorial reactions. Not just our "cognition" as the classic "theory of mind" approach would have it.

"Theory of mind", Gallese later explained to me in his office, posits that we understand things--or people--by reflecting. In contrast, the mirror mechanism suggests that it is not a matter of reflection at all: you feel what the other person is feeling or what the character is doing on screen because the same thing is happening "in" you. 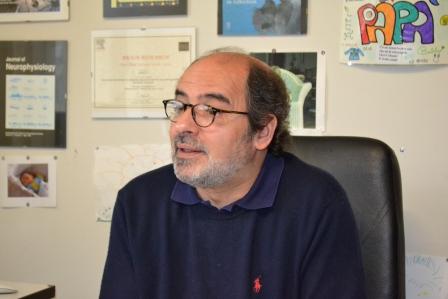 "We are in a restaurant, and somebody reaches for the salt. The classic idea of cognition is that I infer that you want the salt--that is the 'mind-reading' route. But there is a much faster route to understanding you want the salt. I sense it myself--my mirror neurons fire as do yours--and understand through my own body."

Gallese and colleagues discovered mirror neurons accidentally in 1991 while working with macaque monkeys. They noticed that, bizarrely, when one monkey observed the experimenter grasping a peanut, the same neurons fired in his brain, as if he were performing that very action. This led Gallese and colleagues to conjecture a new model of inter-subjectivity: we "connect" to another human being before us because our brain mimics--or creates a bodily representation--of what that other person is doing. Your friend is lifting a heavy pitchfork? In your brain, you are lifting it too. You watch Ingrid Bergman ("Alicia") in Hitchcock's film Notorius, reaching to steal the keys to her husband's wine cellar? In your mind you are also reaching for those keys.

The suspense is yours.

Most of Gallese's experiments are on sensory-motor responses, hence his emphasis in his film studies on how we react to character and camera movement. But he does not shy from saying that mirror neurons could be in other areas of the brain as well, such as the insula and frontal operculum, that involve other faculties, such as emotion, which could in turn influence motor response. But, he quipped, it is difficult to perform these experiments with humans, as "it would mean slicing open the head to put in the electrodes" which most humans are adverse to.

Gallese is, of course, not the only neuroscientist interested in using neurons to explain how we human beings connect to other human beings--or to cinema. Princeton neuroscientist Uri Hasson, for example, the scholar who coined the term "neurocinematics", discovered that when watching a heavily edited film, fMRI scans show that spectators focus on the same things, proving that our brain-response is not as individual as we might like to think (which explains in part film's power as propaganda).

And as Michele Guerra indicates in an academic essay on the history of neurocinematics, interest in brain response to film began in the 1910s, with the work of French physician Edouard Toulouse.

But Gallese is the first to insist on--and invent--the term ES: Embodied Simulation.

What grounds Gallese's work philosophically is the phenomenologist Merleau Ponty's embodied approach to knowledge. For the French thinker Merleau Ponty--taking inspiration himself from Husserl, Sartre and Bergson--one can only know the world through the body. In anything we are doing, whether walking on the beach or speaking to someone or studying a monkey, one is a body responding to another body. The relation is perpetually circular: a reciprocity of body to body. That is our phenomenological relation to the world--you can't get around it. One can never have a "neutral scientific stance" of observation outside of this relation.

Similarly, at the root of Gallese's approach to the arts is his concept of empathy through the body. He claims, for example, that it is because we see traces of the human hand, in brush-strokes or in blobs of color, that we may react to a painting. By extension, it may be that in movie-watching we see the director behind the screen, manipulating the camera and the actors. We naturally "empathize" because we are primed to experience or simulate--through the Mirror Mechanism--the physical motion (or implied physical motion) before us. 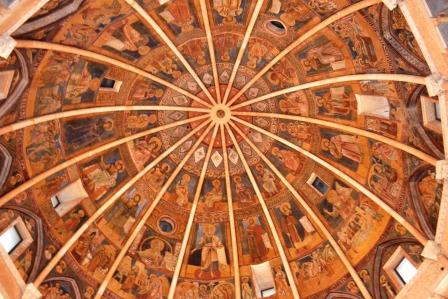 One quibble: can "simulation" or "mirroring" truly explain the complexity of "empathy" or our immersion in the stories we see on screen? Other issues besides mimicking the motor-movements of characters and camera may be at play when we identify with the actions of a film. Memory, for example. Every scene and every object will elicit a memory in the spectator, and this collusion of memory to scene surely influences in great part our emotional and cognitive involvement. As Paris-based neuroscientist Ken Moya once noted to me: "You couldn't understand a movie at all if you did not have memory. Even to understand what a shirt is requires memory."

Another quibble: while neurocinematics, now in its infancy, promises to be the approach to understanding the power of media in the 2lst century, even the heralded Merleau Ponty, the proponent of an embodied approach, would not be tempted--were he alive--to shrink our heady reaction to a film to a matter of neurons firing, even though they are indeed firing. For Merleau Ponty, the fact that we can only experience the world--its body--through the body is the keystone to his phenomological reverence for the je-ne-sais-quoi quality of existence. The circular reciprocity of body to body points to an ineffable "transcendence" that is "there", and can never be grasped. The Body-Body relation does not and cannot explain itself, but is. "If we try to find out what the 'thing' means for us," Merleau Ponty writes in his seminal book The Visible and the Invisible, "We find that what it is rests in itself, that it is exactly what it is...that it is by definition 'transcendent...."

In other words, while neuroscience might explain our neurological processes, it will never, if we follow Merleau Ponty, pinpoint the je ne sais quoi quality of our love for the Big Screen.

But this is not to deny the exciting role (and existence) of mirror neurons--in everything from movie watching to decision making. It may even explain, as Gallese's latest research shows, something about autism. Or why--another new research project--we get fixated on watching scenes in slow motion. 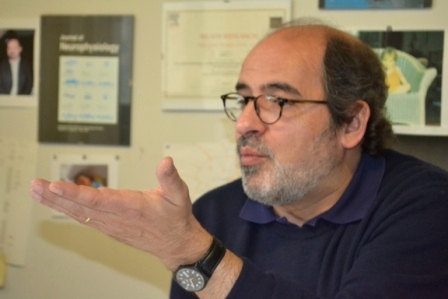 A parting question to the new Renaissance scientist: why so interested in film in the first place?

Gallese leaned forward at his desk, a desk replete with scientific papers, photos of his wife and children, and children's drawings.

"Because it points to the fine line between the real and the unreal." He waved his hand, with a grin. "The fiction of the real, the reality of the fiction." 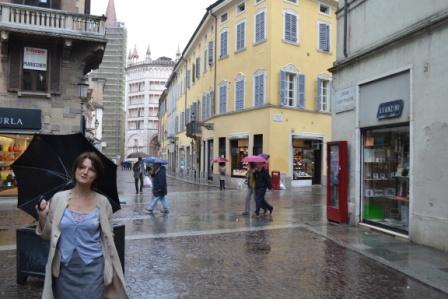