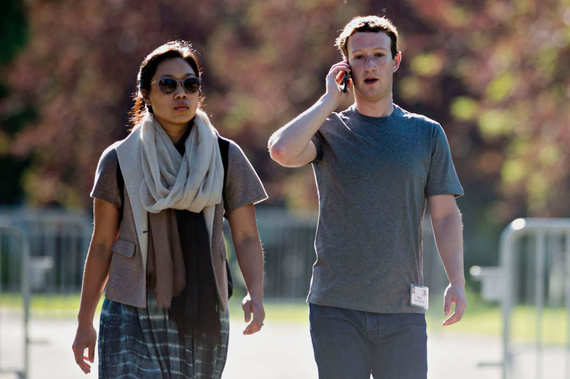 By Melissa Dahl On Friday, Mark Zuckerberg announced the happy news that he and his wife, Priscilla Chan, are expecting a baby, the same way everybody else does these days: in a post on Facebook. Zuckerberg, much to his credit, is more revealing in the post than he had to be, referring to the heartbreak of miscarriage that he and Chan had experienced before this healthy pregnancy.

"You feel so hopeful when you learn you're going to have a child. You start imagining who they'll become and dreaming of hopes for their future. You start making plans, and then they're gone," Zuckerberg wrote. "It's a lonely experience. Most people don't discuss miscarriages because you worry your problems will distance you or reflect upon you -- as if you're defective or did something to cause this. So you struggle on your own."

Self-blame is often among the most painful parts of the aftermath of a pregnancy loss, obstetricians and gynecologists say -- and yet that guilt is almost always unwarranted. Still, when those feelings collide with the deep sadness and unresolved grief that will sometimes follow a miscarriage, the psychological impact may linger for years after the fact, recent findings in psychology suggest.

Much of that self-blame is likely driven by misinformation -- and according to a national survey of 1,084 men and women published in Obstetrics & Gynecology this spring (and which Science of Us covered a few months back), many people are very misinformed about miscarriages. For one, 55 percent of survey respondents believed that pregnancy loss is relatively rare, occurring in just 6 percent of all pregnancies; in reality, up to 20 percent of recognized pregnancies end in a miscarriage.

That survey also showed that many Americans are confused about what actually causes a miscarriage. "I would say that after a miscarriage, the vast majority of women look back at the week leading up to the miscarriage and think about what they might have done to cause [it]," said Dr. Zev Williams, one of the study's co-authors and the director of the Program for Early and Recurrent Pregnancy Loss at Albert Einstein College of Medicine. People in his survey (mistakenly) believed, for example, that stress at work or lifting a heavy object can cause a miscarriage; they also thought that past abortions or a past use of contraceptives or intrauterine devices can cause a fetus to stop developing.

"The truth is that in the vast majority of cases, there is nothing that the woman did that caused the miscarriage," Williams said. Most miscarriages, he explained to Science of Us via email, are caused by a genetic problem in the fetus, usually an extra or missing chromosome. "This problem happens when the egg or sperm or early embryo was being formed, and the miscarriage is really the [result] of the woman's body acting in a healthy manner and recognizing that this is not destined to be a healthy pregnancy and stopping it early so she can conceive again and, hopefully, have a healthy pregnancy," he said.

Related: 15 Women on Their Miscarriages

But perhaps it's not so surprising that these misconceptions about the cause of miscarriages persist -- David Sable, a former ob-gyn and current board member for Resolve, a fertility patient advocacy group, argues that some of this confusion may be inadvertently caused by the term itself. "I hate the word miscarriage," Sable told Science of Us, because it implies the patient herself did something wrong. He expands on this argument in a recent column for Forbes. "Let's be clear: Women do not 'miscarry,'" Sable writes. "They do not carry badly or drop the pregnancy or forget about it ... Nothing comes in and stops the pregnancy, not an argument or a fall or stress or an orgasm or not realizing that the cough syrup has alcohol in it -- a small sampling of reasons some of my patients gave as the 'cause' of their 'miscarriage.'"

Until fairly recently, the pain of pregnancy loss was understudied, but in recent years, some researchers have started to take the potential psychological impact of miscarriage seriously. Here's just a sampling of some of the more recent findings:

After a miscarriage, a woman is at a higher risk for depression or anxiety in the years that follow. This is true even if a pregnancy loss is followed by a healthy pregnancy and delivery. In one recent study, published in 2011 in The British Journal of Psychiatry, Emma Robertson Blackmore of the University of Rochester Medical Center followed more than 13,000 women for three years after the birth of a healthy baby, and found that those who had previously miscarried were more likely to show symptoms of postpartum depression than those who had never experienced a pregnancy loss.

Women who are earlier in their pregnancies when they miscarry aren't any less distraught than women who are further along. One study published in the journal Research in Nursing & Health found that a woman who lost a pregnancy at 11 weeks was just as likely to show signs of grief, anxiety, or depression as a woman who lost a pregnancy at 20 weeks. (A miscarriage is the spontaneous loss of a pregnancy up to the 20th week; after that, the pregnancy loss is called a stillbirth.) The impact on fathers or lesbian partners has been the subject of fewer research studies, but one study of men found that their grief over a miscarriage was often not taken seriously by their friends or family.

Related: Does Stress During Pregnancy Really Cause Autism?

As Zuckerberg said in his post, the misconceptions over the cause of miscarriages means that most people don't discuss the matter with their friends and family. But even if they do, it's hard for their loved ones to know what to say or do. The woman or couple also likely won't know exactly how to handle the deep sadness they're feeling, as we don't have established societal rituals for this kind of grief, said Pauline Boss, a professor emeritus at the University of Minnesota and the author of Ambiguous Loss: Learning to Live With Unresolved Grief. "It's a strange kind of loss," she said. "When an elderly grandparent after a full life dies -- that's still sad. But we have such overall permission to grieve that -- society is so prepared for that kind of grief. It makes sense to us. But losing a child in a miscarriage ... doesn't make sense to most people, especially if they've tried to be healthy and have done the right thing."

But talking about pregnancy loss in a more open and vulnerable way, as Zuckerberg did in his post on Friday, is a helpful first step. "What Mr. Zuckerberg and his wife did in sharing their history of miscarriages was very courageous," Williams said. "I think it is a positive step in trying remove the stigma surrounding miscarriage and will help those women and couples suffering from miscarriage feel less isolated and alone."

More from Science of Us: Lonely People's Brains Work Differently Has Tinder Really Sparked a Dating Apocalypse? Mindfulness Is Great, But Spacing Out Is Good for You, Too Why Straight Men Have Sex With Each Other Inside the Brains of Happily Married Couples

How To Help A Friend Through Miscarriage