That's one big takeaway from the latest major study of fish fraud, this one conducted in New York City by marine conservation group Oceana. The researchers gathered fish samples from local restaurants, grocery stores and fish markets and then used DNA testing to determine whether the meat actually came from the species indicated on the label.

The test results, released Tuesday, show that in many cases the answer was no. Specifically, 39 percent of the 142 samples tested were not what they were purported to be.

No seafood was mislabeled more frequently in the study than "white tuna," a staple on many sushi menus. The Food and Drug Administration's Seafood List, considered the gold standard on matters of seafood labeling, doesn't include "white tuna" as an "acceptable market name" for any species of fresh fish, but a layperson seeing that name would at least expect that it's a kind of tuna. Yet the Oceana tests found that 94 percent of samples of fish listed as "white tuna" were actually escolar, a white-fleshed fish in the snake mackerel family that has long been known to cause gastrointestinal difficulties in those who eat it.

Dr. Kimberly Warner, Oceana's chief scientist, chalked up some of the discrepancy to translation issues. She told The Huffington Post that it was possible some Japanese-speaking sushi chefs believed in good faith that the proper phrase for the fish in question was "white tuna," which the FDA says should only ever be used for canned (and therefore cooked) albacore tuna.

"The bottom line is that if you go to a sushi bar, it's a good idea to ask questions because sushi is an art form," Warner said. "They're very proud of the fish they serve. So there's no harm in asking, 'Well, what is that?'"

The rates of mislabeling varied considerably from species to species. Here's a chart from the study summarizing the findings: 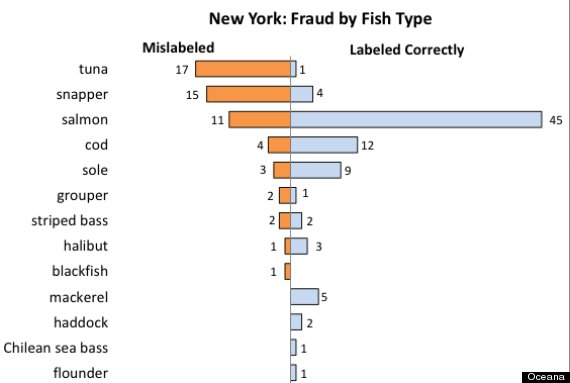 The New York results are more or less consistent with those of similar studies that Oceana has conducted in Miami, Boston and Los Angeles, which turned up mislabeling rates of 31 percent, 48 percent and 55 percent, respectively. They also jibe with several widely publicized reports on the subject in the Boston area released by The Boston Globe.

Consumer advocates argue that fish mislabeling can defraud consumers who receive cheaper species of fish than they pay for, risk the health of individuals who accidentally eat seafood that they're trying to avoid for medical reasons and threaten the long-term survival of overfished species that get substituted for those that are more sustainable.

For all those reasons, these reports have raised public concern about fish labeling. Five hundred prominent chefs and restaurateurs recently sent Congress a petition on the issue. Sen. Barbara Boxer (D-Calif.) wrote a letter asking for action on the issue from the FDA, and this past summer Reps. Edward Markey (D-Mass.), Barney Frank (D-Mass.) and Walter Jones (R-N.C.) introduced the proposed Safety And Fraud Enforcement for Seafood (SAFE Seafood) Act, which Oceana argues would cut down significantly on mislabeled fish.

Yet Congress still hasn't voted on the bill, and it looks unlikely to do so before the end of year, which means the legislative process would have to restart in 2013.

To combat mislabeling in the meantime, Warner recommends that customers ask restaurants and fishmongers to provide as much information about the fish they're selling as possible.

"If vendors don't know that their customers are demanding this kind of information, they're going to get away with it forever," she said.