A recent article by Jim Geraghty in the National Review purported to debunk the narrative that the Obama campaign is struggling to keep pace with outside groups -- largely, super PACs -- supporting Mitt Romney. Geraghty claimed that, in fact, outside groups had spent $35.3 million on negative ads targeting Mitt Romney compared to $9 million attacking President Obama.

These numbers are misleading for a number of reasons. First, the figure for negative ads against Romney lumps together spending by outside groups supporting President Obama with spending by outside groups supporting Romney's primary opponents. By this rationale, Sheldon Adelson's $21 million in contributions to Newt Gingrich would count towards President Obama's alleged "super PAC advantage" -- a result that might surprise the man willing to spend $100 million to unseat the current president. When one discounts spending by conservative groups attacking Romney, liberal groups outpace conservative groups $19.7 million to $10 million (the $9 million figure cited in the article was incorrect) -- an advantage, but hardly the yawning chasm initially alleged. Geraghty acknowledges this oversight later in the article, but it seems odd to lead with such an obviously inflated number.

Furthermore, super PAC spending is just kicking into full gear, and the full heft of the huge sums raised by conservative groups has yet to be unleashed. For example, this week, American Crossroads, Karl Rove's super PAC, announced an anti-Obama ad buy of $40 million, twice the amount spent by liberal super PACs attacking Romney so far. Any conclusions based on super PAC spending thus far are woefully premature.

Additionally, those figures do not include undisclosed spending by non-profits, which are playing a major role in the election. In 2010, 501(c)4 "social welfare" organizations outspent super PACs by a three to two margin, and conservative-leaning organizations outspent their liberal counterparts $78 million to $16 million. Those figures do not even include spending by the Chamber of Commerce, which claimed to have spent $75 million in 2010 (but disclosed only $32 million). By itself, the Chamber eclipsed spending by all super PACs during the 2010 elections.

Though it is impossible to know how much non-profit groups are currently spending until after November 6th, there are strong indications that secret spending will once again surpass super PAC spending. 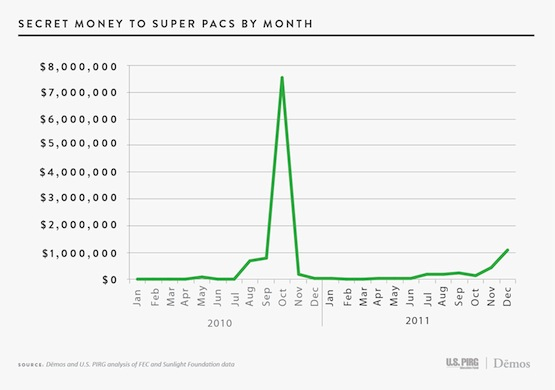 According to the Campaign Media Analysis Group, tax-exempt groups have outspent super PACs by a 2-1 margin so far in the 2012 election. Just last week, Crossroads GPS, Karl Rove's "social welfare" organization (which, of course, is affiliated with American Crossroads) announced an ad buy of $25 million attacking President Obama in battleground states for his record on the economy. That ad buy alone is nearly three times the total amount spent by super PACs attacking the president so far.

And, like all outside spending, the rate of secret spending will almost certainly escalate as the election approaches. In 2010, donations from non-profits to super PACs spiked in the month before the election. If non-profits amp up their spending equally precipitously this year, then comparing spending trends at this point in the election is virtually meaningless. The reason that the Obama campaign is so panicked about vows by conservative third-party groups to spend $1 billion to defeat him is that most of the money that will be spent in the presidential election has yet to be spent.

At the end of the day, there are no winners or losers in the outside spending race to the bottom. Everyone loses when our democracy is damaged by the outsized role of unlimited, undisclosed spending, no matter the ideology of the spender. Accordingly, debate over which candidate benefits most from third-party spending is arguably immaterial. But a complete picture of how our elections are financed in the post-Citizens United era is essential to American voters.