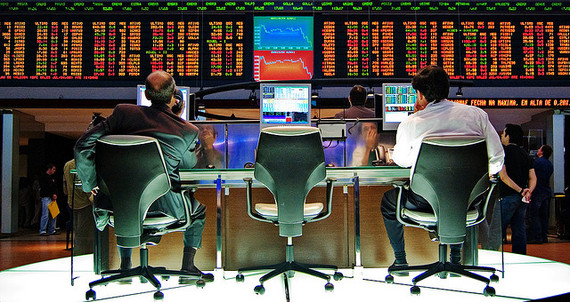 While it's a low bar, Bloomberg TV always seemed to me to be the best of the financial media. Its anchors are professional and knowledgeable. Its coverage is broad and responsible. It avoids the hype and sensationalism typical of many of its competitors.

Bloomberg recently launched a new morning program, Bloomberg Go. It features some high-powered on-air talent, including David Westin, who previously had final behind-the-scenes say at Good Morning America and is the former president of ABC News. Westin is an on-camera fixture of the new program. He works with Stephanie Ruhle, a respected Bloomberg anchor.

On Oct. 12, Bloomberg Go featured a brief "debate" on the merits of active versus passive funds. On the "passive" side was my colleague, Larry Swedroe, director of research at The BAM Alliance. Taking up the active cudgel was David Barse, chief executive officer at Third Avenue Management. You can watch the clip of this "debate" here.

Swedroe explained that "while it is certainly possible to beat the market through active management...you have about a 1 in 50 chance of outperforming." He doesn't "like the odds." He added that, as set forth in his recent book, The Incredible Shrinking Alpha, the odds of an active fund outperforming its appropriate risk-adjusted benchmark have been persistently declining. Twenty years ago, about 20 percent of active funds were generating statistically significant alpha. That number is down to about 2 percent today.

Barse responded that Third Avenue, since its inception, has been able to beat the benchmark it uses. He noted that the "active share" of their funds is in the "high 90s," so the index is not a "relevant measurement" of what the firm is actually doing, which is "generating good, long-term returns."

When confronted with data on the general underperformance of active managers against standard benchmarks (in this case the S&P 500 index) Barse acknowledged that generating alpha was "hard," but also stated that attempting to do so was a "thrill" and an "intellectual challenge." He said Third Avenue works "hard to do it" and it's what the firm strives to do "every day."

Most viewers would come away with the impression that there was merit to both sides of the argument. They might even consider investing with Third Avenue, since the import of Barse's argument in favor of active management was that Third Avenue has a track record of successfully overcoming the odds against "beating the market."

Not quite so fast.

The data paints a different picture

In a subsequent article, Swedroe examined the returns of three of Third Avenue's funds. His findings were at odds with Barse's assertions during the debate.

The Third Avenue Small Cap Value Fund (TASCX) is categorized by Morningstar as a small-value fund. Fund managers often confuse investors by using the wrong benchmark as a basis of comparison for fund performance. Swedroe clearly used the correct benchmark in his comparison, relying on Morningstar.

TASCX returned 5.20 percent per year and 8.34 percent per year for the 10- and 15-year periods ending Oct. 13. According to Morningstar, this fund underperformed all but about 10 percent of the small-value funds that survived during these periods.

An analysis of Third Avenue's global and international funds also demonstrated underperformance. Swedroe again used Morningstar data to ascertain the correct benchmark. He found the Third Avenue Value Fund (TAVFX) underperformed the 10- and 15-year returns of comparable passively managed funds from Dimensional Fund Advisors, no matter which mix of Dimensional's large- and small-value funds were used, or which mix of domestic and international funds were selected.

Finally, Swedroe looked at the Third Avenue International Value Fund (TAVIX), which is categorized by Morningstar as a small-mid value fund. For the 10-year period ending Oct. 13 (the fund didn't have 15 years of returns), TAVIX returned 1.75 percent per year. The comparable Dimensional fund, the DFA International Small Cap Value Fund (DISVX), outperformed TAVIX by a whopping 4.56 percentage points a year.

Swedroe concludes his article as follows: "Not only did Third Avenue's funds fail to outperform in each of the cases I analyzed, but they underperformed by wide margins. Maybe, just maybe, alpha is a lot harder to deliver than many, including David Barse, think. The Third Avenue funds I looked at certainly weren't generating alpha or beating appropriate benchmarks."

Swedroe excluded from his analysis Third Avenue's largest and most popular fund, the Third Avenue Real Estate Value Fund (TAREX). He later explained this omission by noting that Vanguard doesn't have an international real estate fund and Dimensional's comparable fund does not have a long enough track record, so he had no basis for comparison. When he looked at a 5-year time period, and took an average of the returns for Dimensional's domestic and international REIT fund, TAREX marginally outperformed (10.48 percent to 10.2 percent).

Nevertheless, even when including this fund, Third Avenue outperformed in only one of four funds, which, as Swedroe says, isn't "very good odds." What's more, the single fund that did manage to outperform just barely accomplished this feat, while the three funds that underperformed did so by greater amounts. This is consistent with the evidence showing that the margins of active management outperformance tend to be much slimmer than the margins of active management underperformance.

I asked Third Avenue for its comments on Swedroe's analysis. It declined.

The responsibility of the media

While the interviewers on Bloomberg GO challenged Barse with general data about the underperformance of actively managed funds, they were unprepared to confront his contention that Third Avenue Management is the exception to the rule.

The data in Swedroe's article is readily available. Think about how helpful it would have been if the moderators of this "debate" had been aware of it and asked Barse some pointed questions, like: "For the past 10 and 15 years, isn't it a fact that investors would have earned higher returns in comparable index and passively managed funds than in your Third Avenue Small Cap Value Fund, your Third Avenue Value Fund and your Third Avenue International Value Fund?" and "How can you justify your assertion that Third Avenue Management adds 'alpha' for investors in these funds?"

Now that would be a real debate.

It would also be responsible journalism.