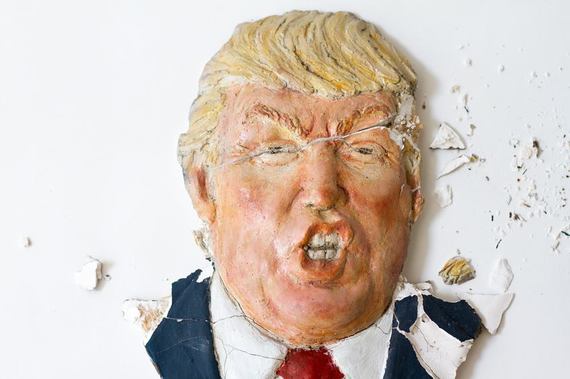 I am a Hillary supporter. I think the other candidate is a misogynistic, racist, cardboard cutout of a human being who is completely unfit to be president. For months, I've been walking around in a state of constant disbelief that he's the Republican frontrunner in this election.

Just about everyone I'm connected to on Facebook shares this opinion (to some extent). It's my own echo chamber. I know that and I don't really care, but I wasn't always thrilled about Hillary. I loved Bernie Sanders--particularly his approach to healthcare because, as the mother of a child with cancer, healthcare is always on my mind. But, after watching all three debates from start to finish, I became increasingly impressed with Hillary Clinton's poise, her deep knowledge of issues, and her ability to deflect the constant hate-speech hurled at her by her opponent.

I'm proud of her--and proud of the many smart, successful women in my modest Facebook circle who began speaking up about their own firsthand experiences with misogyny, sexual harrassment...and worse.

If nothing else, the great orange circus peanut of man that is Donald Trump has brought the topic of misogynyy to the forefront of this country in a very tangible way. He's demonstrated it over and over again in every single interaction he's had with Hillary Clinton. My friend Abbe Aronson's latest Facebook update fully captured this sentiment. She is a smart, fiercely successful and unwaveringly strong woman who I'm proud to know. Here are her words--lifted from her latest Facebook status--which I hope are read far and wide. By the way, Abbe likes to use salty language. You've been warned...

Abbe's Note: This was what I posted on Facebook this morning when I was wandering around my house, wondering why I was so agitated about last night's debate, since we learned nothing new and heard nothing new. Except. One. Little. Vomitrocious. Sentence. I'm about to be on a roll, so either get comfy or scroll on...

Here's the thing. We already know he's truly a piece of shit and a delusional moron. The sight of him literally makes people smirk and gag and shake their heads around the globe. That's not even what's on my mind this morning.

What I'm really thinking about -- fixated on, really -- is not that he won't concede the election. He will. But I can't stop thinking about how he let his inside voice out last night, just enough to really seal his coffin and really show THE WORLD what he thinks about women.

You could see the coaching and the prepping in his hateful stupid eyes. The attempts not to sniff or interrupt. But when he FINALLY couldn't take it anymore -- when he was literally about to EXPLODE (or implode?) with anger -- he offered that teensy, tiny little piece of bitter fury in the form of "What a nasty woman" and that confirmed everything that's been in the ether since Pussygate.

We all know that what he really wanted to say was something like "What a cunt" or similar, which is fine; that's what we've come to expect and know from him.

I guess what I'm still thinking about is this: it IS about how she's a woman! It IS about how he's going to be beaten to a pulp by someone who is not only smarter, bolder, stronger, etc. but also has a pussy! It IS about that he can't push her around or intimidate her or impress her or whatever bullshit has "worked" for him in the past when he's been trying to "act" like a man!

It IS about her being a woman!

I am so stupid. I've just been gliding along here, thinking about a million reasons why he's a hideous horrible person, but at no time have I thought, "What a hideous horrible MAN!" The misogynistic part of his vitriol wasn't actually even that high on my list of his terrible qualities, because you can tell from the way he interacts with people that he thinks less of anyone who isn't a rich white man -- gays, minorities, etc. I've always assumed he was simply dismissive of women as part of that.

Oh, honey, it is so fucking ON.

About the author: Publicist Abbe Aronson heads the eponymously named company Abbe Does It, focusing on public relations and marketing, event planning, image and design consulting, fundraising and what she refers to as "artful schmoozing" -- business intros that truly count.