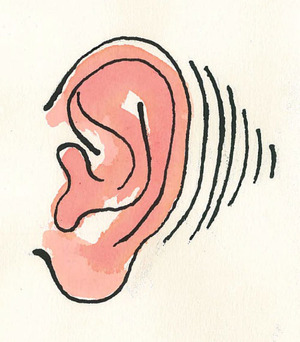 Knuckle-cracking, jaw-clicking, gulping, sniffing, whispering, and for some people, even the sound of someone else's breathing, can fall hard on sensitive ears. One friend told me that strong Ps, aka plosives while speaking, annoy his wife. (The dentalization of "T" drives me up a tree.) My hearing can be so keen that on a city street, I can detect whether a person walking past me in high heels needs new tips.

This hypersensitivity to sounds is called misophonia. According to a study in Frontiers in Human Neuroscience, misophonia is a condition in which "a person experiences autonomic arousal (analogous to an involuntary 'ﬁght-or-ﬂight' response) to certain innocuous or repetitive sounds such as chewing, pen clicking, and lip smacking."

Not surprising, the most problematic sounds are not car horns blasting or clocks ticking. The misery of misophonia is generally related to other people's behavior. I am guilty as charged. In a HuffPost blog, "Popcorn Can Make You Insane," a grating movie situation is noted:

I took a seat in the theater, looking forward to the acclaimed 2.5-hour epic-ness of 'Les Misérables.' The person behind me was, too... along with what seemed like a 60,000-pound bag of popcorn. With no exaggeration, she ate throughout the entire 180 minutes of the movie. Kernel. By. Kernel. Chomping and chawing. After one singular kernel was masticated, she dove back into the bag to fish for more. And when that was consumed, she shoveled through the popcorn, again... as if on an endless expedition to find the next perfect kernel to gnash.

Another time, I sat next to someone who had the discipline to forego the popcorn. But here's the catch: She ate an A-P-P-L-E for the first 10 minutes of the movie. With each bite, my sensory processing went ballistic. In caveman days, I probably would have either pelted her with rocks or recoiled under a bush to cower.

Dark Broadway theatres can be auditory houses of horror, too. During a recent performance, here's what one misophoniac reportedly suffered in earshot:

• Throughout the first two acts, a doting husband flapped the theatre program to fan his 10-month pregnant wife.

• A woman drinking from a water bottle crinkled the plastic as she gulped.

"Then, immediately after intermission, and as the curtain went up, the person sitting to my right started unwrapping a piece of candy every time a voice on stage went into a high-treble pitch, as if that would camouflage the unwrapping sound," he continued.

"After untwisting the wrapper, the woman picked out the candy and popped it into her mouth," he said. "Of course, the candy hit her teeth first. When it landed on her tongue, she then started sucking the candy. Simultaneously, she proceeded by stuffing the empty wrapper into a side pocket of her leather purse and slowly zipped the pocket. (Shoot me now.)"

One misophoniac told me that her hyper-hearing goes back to when she was 10 years old and shared a bedroom with her younger sister.

"We had a signal that if my sister started breathing too loudly -- or more specifically, there was a booger in her nose and it made a whistling sound -- I would knock once on the side of my bed," she said. "If it continued, I would knock twice. If the nose whistling persisted, I'd knock three times. You get the picture."

Even non-misophoniacs share certain sound sensitivity. In a study titled "Aversiveness without pain: Potentiation of imaginal and auditory effects of blackboard screeches," researcher David J. Ely discusses blackboard screeches and pure tones. "The instruction set used in this study included a description of the three-pronged garden tool being dragged across a slate surface. Virtually all subjects shuddered upon reading this portion of the instructions."

In another study, "Psychoacoustics of a chilling sound," researchers note that high-pitched acoustic stimulus "very closely resembles some of the spectrograms of warning cries emitted by macaque monkeys." They go on to say that the signal "may be similar to the vocalizations of some predator."

Social media is in on the fracas and brouhaha. On a Facebook page called "Misophonia Madness," postings include:

While recently commiserating with a fellow miso-, our conversation was suddenly interrupted.

"Did you hear that?" he asked. His head was slightly tilted and he wore an expression of mild-anguish.

"Actually, I did hear that," I said. A few tables away, my friend and I fixated on a kid sipping from a juice box.

"Let's just ignore it," he continued. "Pretend it's not happening." (He cupped his ears and tried to drown out the noise with "LA-LA-LA-LA-LA-LA.")

Once that situation was quelled, something else struck within my omni-audible range. The person across from us bit her fork. Her date chewed loudly and in the distance, a fresh tray of ice fell from the icemaker. "Fight" or "flight" flashed before my eyes.

Do I blame sound sensitivity on my primordial ancestors? Is it amiss to think a screeching macaque monkey is about to lunge? To obtain a level of calm, noise-cancelling headphones may be my next go-to fashion accessory. And if you see me sitting in your midst, tiptoe past quietly... and silently wave.

More:
healthy livingNoisesnoringsound sensitivitymisophonia
Newsletter Sign Up
The essential guide to taking care of your mind and body
Subscribe to HuffPost’s wellness email
Successfully Subscribed!
Wellness delivered to your inbox