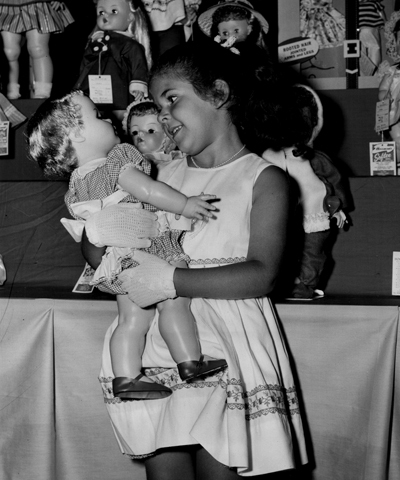 --Me, circa 1961, during the first year of JFK's presidency. My father sold dolls in his hardware store (although not the Madame Alexander Caroline doll), and a highlight of the year was attending the Worthington Toy and Gift Show.

Like most American schoolchildren on November 22, 1963, I was sitting at a desk when the news reached us. It was after lunch, and, if I were to guess, my second-grade class was doing phonics exercises when our principal, Sister Mary Vaughan, announced over the P.A. system that President Kennedy had been shot, and would we all please stop our work and pray for him?

After the initial gasps and cries of disbelief, the room became as quiet as the empty church across the alley. I don't know with certainty that this happened, but I imagine our teacher, Miss Foreman, pulling out her rosary, quietly marking each bead with its designated prayer -- the Our Father or the Hail Mary or the Glory Be. There's no doubt in my memory about this, however; I clenched my hands together as tightly as I could and squeezed my eyes shut: this was the most important praying I had ever done before, and it had to count.

So fierce was my prayerful concentration that I barely heard the P.A. system crackle back to life. Sister Mary Vaughan had returned to announce that the President had died. We were now to pray for his immortal soul. You could tell she had been crying, but she was trying to be brave for us. She was, in fact, the bravest person I knew. She once traded in her black habit for the cooler white one worn by the Sisters of Notre Dame when they served as missionaries in India. She spoke at assemblies in the cafeteria about the experience, asking us to contribute our pennies and dimes to the missions. There were rumors that she might leave St Mary's at the end of the school year, possibly to return to India. I hoped it wasn't true. She was the kindest of all the nuns and teachers at St. Mary's, and I knew I would miss her just as much as I would miss President Kennedy.

President Kennedy. He was dead, but I couldn't really grasp what that meant. I had never known anyone who died before. Not that I actually knew him, but I did see him once in person, before he became president. This was a memory far more powerful than any television image, and there were certainly many of those to recall. It seemed as though he was on television all the time.

It was three years ago, on Monday, September 27, 1960. I was 4-years-old and, like most days spent in my father's hardware store in Elyria, Ohio, I was coveting the dolls in the toy aisle, or scribbling with crayons on the large pads of paper that had "Supreme Hardware" printed in green letters on the top.

On that particular day, crowds began to gather on either side of Middle Avenue. Senator John F. Kennedy's presidential campaign motorcade route was to proceed right past the store, and my father wanted to make sure we were witness to history. He scooped me up, rushed us outside, and perched me on his shoulders so I'd have a good view.

The man who was running for president waved to us from the convertible limousine -- he waved to everyone on the sidelines -- all of us cheering "JFK! JFK!" Someone tossed pretend straw hats into the crowd, and my father caught one. "WIN WITH KENNEDY" was stamped on the red, white, and blue headband. Then, just as quickly as the excitement peaked, the limousine drove north on Middle Avenue to take the Senator and his motorcade on to his next stop.

"Motorcade" wasn't a word I knew then. I only knew that the car in which Senator Kennedy sat, perched on the backseat's rear ledge, was simply part of the parade, and reminded me of my father's Cadillac convertible. But three years later, the word "motorcade" was forcibly added to my vocabulary, along with "assassinated" and "assassin," "rotunda," and "caisson."

I suddenly thought of Caroline. I was barely two years older than she; I couldn't imagine that the pert little girl I thought of as a kindred spirit wouldn't have a father anymore.

Like most little girls in 1963, Caroline represented for me a combination of fairy-tale princess, sister, and playmate. I was an only child, so it thrilled me to know that someone nearly my age lived in the White House with such glamorous parents and an adorable baby brother. I played with Caroline paper dolls, and I had a child-sized Kennedy rocking chair.

After school let out, Mrs. Schaeffer, whose daughter was in my class, dropped me off at the corner of my street. When I reached our front sidewalk, I could see my mother, standing as she always did, preparing dinner at the dining room table. (Our kitchen was a small galley with hardly any counter space.) She was crying, and even though I knew that what happened that day was horrible, it still surprised me -- and frightened me a little -- to see my mother crying like that. The television was on; I'm almost positive that it was tuned to CBS and Walter Cronkite, because in my mother's view, the fourth-most revered man in the world (after Pope Paul VI, President Kennedy, and Bishop Fulton J. Sheen), was Walter Cronkite. I don't, however, remember seeing any of the coverage from that day.

Did my mother think the reporting was too disturbing for me to hear? Was I too young to join her and my father in front of the set? Would she have turned it off and wait to get more news from the afternoon paper? Or wait until I had fallen asleep? I honestly don't remember.

The next television memory I have was generated a couple of days later. My parents and I had gathered at my Aunt Mary's house on Pinewood Drive to watch the funeral procession on her color TV.

We cried when we saw Caroline and John-John -- especially when he saluted his father. The horse-drawn caisson (that word fascinates me still) making its long way through Washington -- such a vastly different procession from the motorcade I had witnessed three years earlier -- mesmerized me.

My mother used to tell me that when I was little, if I liked a person, I would say "He (or she) gots a nice face." I thought President Kennedy had a nice face. I loved his smile, and the way he looked right at us when he spoke to us on television, the way he grinned and waved from that convertible limousine on his swing through Elyria, Ohio. He was so handsome. Now he was gone, hidden inside the flag-draped coffin.

Those images from the funeral cortege (another word I learned that weekend), will always stay with me, but I learned something else during that solemn broadcast that would prove even more powerful.

My mother and I used to light votive candles in church as part of our prayers of intercession. I never gave much thought to the fact that the candle would eventually burn itself out, and a fresh new votive would replace it. It seemed to me that the act of lighting the candle was the important thing. But then the television cameras showed us where President Kennedy would be buried, in Arlington National Cemetery, and Walter Cronkite told us that an eternal flame would mark the President's grave site. I imagined the largest votive candle in the world, one that would never burn itself out.

So many words and images seared themselves into my consciousness that November.

Only one of them -- the eternal flame -- offered some measure of comfort.