Filmmakers Cecilia Peck and Inbal B. Lessner set out on a journey to tell the story of a young woman who was the victim of a horrific rape crime. That woman, Linor Abargil chose to speak up, take a stand, help others and turn her experience into a positive. Brave Miss World, now streaming on Netflix, and in consideration in multiple Emmy categories, became so much more than just one woman's journey and aims to gather an international community with the strength to rise up and say "NO" to rape. They hope that all survivors of sexual assault -- and their friends and families -- will use the film"s website as a place to connect find resources for support. If victims are encouraged to speak out and seek help, the silence will end. Together we can change the global dialogue regarding sexual assault.

We met former Miss World Linor Abargil at a coffee shop in West Hollywood in 2008. She had come from Israel to talk about a film on the subject of rape. As a young beauty queen, she had been abducted, stabbed and raped in Milan, Italy, and she had been able to convict the serial rapist. She wanted to tell her story, hoping that it might help other survivors. She was determined to transform herself from being the victim of a horrific crime, into someone who could encourage others to speak out.

During her reign as Miss World, Linor had to testify against the rapist in a difficult, public trial. When the guilty verdict came in, Linor turned to a news camera in the courtroom and said to all the women in Israel that if she could do it, they could too. If something had happened to them, not to be afraid to report. The calls to rape crisis centers rose dramatically that year, and Israel passed legislation protecting the rights of rape victims. Now, 10 years later, Linor was launching a website for other survivors, and was ready to speak publicly again. She wanted to document her journey to see if she could bring about global change. She seemed empowered but still haunted, a kind of wounded hero.

Linor could be any of us. Every day in every city, it happens to someone. Her story is the story of every survivor. The trauma doesn't go away, but you can pick up the pieces and move forward, with the right support. Linor was able to see justice done, but you can't help but wonder: Would she have been able to convict the rapist if it wasn't for the Miss World crown, and the public interest in her case?

We didn't know the film would take five years, or that it would take us to South Africa, Europe, Israel, and college campuses in the United States. A big part of our financing fell out early on, and we had to piece together the funds for every shoot. We were joined by phenomenal EP's: Regina Kullik Scully, Geralyn Dreyfous, Lati Grobman, Irv Bauman, Orna Raiz. We received grants from the Artemis Rising Foundation and the Kroll Documentary Fund. The Women In Film Finishing Fund enabled us to complete the film. Later on, the Fledgling Fund, the Roy A. Hunt Foundation, the Embrey Foundation and the Marc Rich Foundation all provided outreach support. 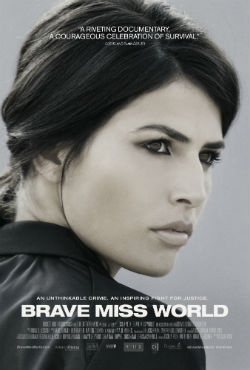 Things got very challenging along the way. Telling her story and listening to the plight of so many women, men, girls and boys was bringing up Linor's own trauma. She began to experience PTSD, and her hard-fought stability was suddenly in real jeopardy when she learned that her rapist was up for parole. She shut down filming and took a long break. But six months later she came back, determined to carry on. Linor's fight to keep the rapist in prison, while helping other survivors speak up, became the narrative of Brave Miss World. Weaving the diverse voices of those survivors into the narrative was the most challenging editorial balancing act. They act as a Greek chorus, whose stories reflect and comment on Linor's journey.

Brave Miss World premiered at AFI Docs in Washington, and we were invited with Linor to meet Lynn Rosenthal, the President's Advisor on Violence Against Women, at the White House. We've since screened at over 50 college campuses through our #IAmBrave Educational Screening Series. Campus safety is a primary concern of Linor's, who was 18 when she was raped. In the film, a brave Princeton student speaks up about being discouraged from reporting her assault. At UCSB, Linor meets the victim of a very controversial case of rape -- the first time her voice has been heard publicly.

Our screenings give college students a safe space to discuss issues of awareness, prevention, intervention, and reporting. We're hearing from across the country that students do not feel safe at their schools. Mandatory appropriate training for those responding to reports of rape is essential. The first words a survivor hears are so important -- they need to feel support and reassurance that resources are available. We're very encouraged by the recent White House Task Force to Protect Students from Sexual Assault, and by the work being done by our colleagues Annie E. Clark, Andrea Pino, and the other brave students around the country who have mobilized to hold university administrations accountable.

Awareness of the pandemic of rape is growing, and it's time to shed light on rape crimes. Linor's decision to speak out coincides with a global urgency for more attention to the lack of access to justice for many victims of rape. The outcry in Mumbai, the spotlight on rape in the U.S. military, and the high-profile cases on our college campuses reflect the institutional sanctioning of rape, and underscore the need for more attention to this issue in films, news media, and by law enforcement worldwide.

We set out to follow one woman's story, which led to other stories, and horrors, occurring on our college campuses and around the world. As mothers, daughters, fathers and sons watch Brave Miss World, we hope they follow the path of Linor's outspoken advocacy, and we believe that the film will impact the way colleges, police departments, justice systems, and families around the world respond to reports of rape and assault.