The Missed Connections corner of Craigslist is generally reserved for late-night lust seekers, hungover lotharios who left the bar without a number and the occasional earnest attempt to leverage a shared gaze to a first date. Now, we can add platform for feminist solidarity to the list.

When a male passenger took it upon himself to offer some unsolicited weight loss advice to a female rider, he probably had no idea his suggestion that a woman "RESPECT" herself would result in an Internet shaming with Aretha Franklin-level reverberations. A woman who witnessed this gross exchange took to Craigslist to avenge her fellow passenger -- speaking for any woman who has received an unsolicited comment on her appearance, but also for -- you know -- anyone generally in favor of human decency: 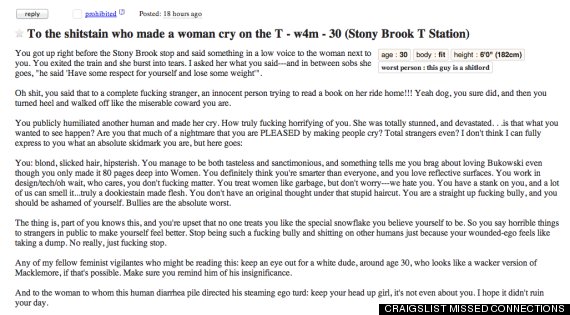 You got up right before the Stony Brook stop and said something in a low voice to the woman next to you. You exited the train and she burst into tears. I asked her what you said -- and in between sobs she goes: "He said 'Have some respect for yourself and lose some weight.'"

This guy deserved a scarlet letter (the choice A-word is not adultery here...), and a fellow commuter was happy to give it to him. The spot-on missed connection tears the man -- and his terrible behavior -- right down:

Oh shit, you said that to a complete f**king stranger, an innocent person trying to read a book on her ride home!!! Yeah dog, you sure did, and then you turned heel and walked off like the miserable coward you are.

You publicly humiliated another human and made her cry. How truly f**king horrifying of you. She was totally stunned, and devastated. . .is that what you wanted to see happen? Are you that much of a nightmare that you are PLEASED by making people cry? Total strangers even?

The author hypothesizes the perp's personal state affairs with a precision any woman who's confronted a misogynist jerk will recognize:

You: blond, slicked hair, hipsterish. You manage to be both tasteless and sanctimonious, and something tells me you brag about loving Bukowski even though you only made it 80 pages deep into Women. You definitely think you're smarter than everyone, and you love reflective surfaces. You work in design/tech/oh wait, who cares, you don't f**king matter. You treat women like garbage, but don't worry -- we hate you. You have a stank on you, and a lot of us can smell it...truly a dookiestain made flesh. You don't have an original thought under that stupid haircut. You are a straight up f**king bully, and you should be ashamed of yourself. Bullies are the absolute worst.

The thing is, part of you knows this, and you're upset that no one treats you like the special snowflake you believe yourself to be. So you say horrible things to strangers in public to make yourself feel better. Stop being such a f**king bully and shitting on other humans just because your wounded-ego feels like taking a dump. No really, just f**king stop.

And in case this gentleman hasn't already been made aware of his virtual public slaying, the author recruits women of Boston to enlighten him:

Any of my fellow feminist vigilantes who might be reading this: keep an eye out for a white dude, around age 30, who looks like a wacker version of Macklemore, if that's possible. Make sure you remind him of his insignificance.

Her words for the aggrieved? "Keep your head up girl, it's not even about you. I hope it didn't ruin your day." The thought that we might all have our own fairy god-feminist lurking just around the corner is a lovely feeling.