This has not happened yet, but contrary to what you might think, it is not a figment of my wild imagination, but rather a page from the history of the Middle East, one worthy of remembrance.

The day started off as a beautiful sunny morning, like so many others in Israel. A group of 7th and 8th grader girls from a local Middle School in Israel were excited, getting ready to go on their annual school trip. This time the destination was the "Island of Peace" in Naharayim, right on the border between Israel and Jordan.

Naharayim is a site in the Jordan Valley, located right on the border between Israel and the Hashemite Kingdom of Jordan. During the War for Israel's Independence in 1948 the area was conquered by the Jordanian army. In 1994, after signing the Peace Agreement between Israel and Jordan, the site was renovated and rebuilt as a buffer zone between the two states, under Jordanian sovereignty but in partnership with Israel, and included a park called "The Island of Peace", where Israelis and tourists could enjoy and visit. This was the girls' destination.

A day which started off so bright, turned all of a sudden very bleak and dark. During the girls' visit to this unique symbol of the hope of co-existence, only 3 years after the signing of the Peace Accord with Jordan, a Jordanian soldier on the premises turned his gun at them. He shot and killed seven school girls, while seriously injuring six others. The event sent shock waves throughout Israel. The cruelty, and the symbolism, were painful and evident.

And yet, something happened afterwards which gave a glimmer of hope that maybe, just maybe, we could overcome this difficult moment: a gesture long remembered in the annals of history, but one which seems to have been forgotten from our hearts.

Upon learning of the incident, the late King Hussein of Jordan (and father of the current King Abdullah II) cut short an official visit to Spain and in a courageous gesture arrived in Israel to give condolences in person to the bereaved families. In an image forever seared into the memories and hearts of so many in Israel, the Hashemite King, dressed in his traditional Jordanian Keffiyeh, knelt in mourning with the families of the seven Israeli schoolgirls, whose each and every family he visited. The late King had this to say to the families: "We are all members of one family, as this incident is a crime that is a shame for all of us. I feel as if I have lost a child of my own. If there is any purpose in life it will be to make sure that all the children no longer suffer the way our generation did."

"Many Israelis were touched by Hussein's condolence call, including Yehezkel Cohen, whose 13-year-old daughter Nirit was killed in last Thursday's shootings. "I really love him. Despite the sorrow, I say this: I hope and believe in King Hussein and a real peace." (CNN report by Jerrold Kessel in Jerusalem, March 16, 1997).

This month marks 19 years since that attack. As we are immersed in the US Presidential Elections which take center stage, we still seem to search for that "Great" leader, a continuous ongoing struggle for humanity, both when it comes to judging past leaders as well as when looking into prospective ones.

To me, leadership has always been about inspiration, a vision, an ability to spark people's hearts and imagination. The late King Hussein's act of leadership did just that, as he dared not only to "condemn" an attack in a diplomatic language, but to rise to the tough challenge and look in the eyes of the victims' parents, not to mention doing so in front of international media and a room filled with cameras. This is a deed worthy of our remembrance and learning.

Another Palestinian attacked an Israeli woman with a knife this morning, injuring her severely. These days innocent Israelis are attacked almost daily by Palestinian terrorists, while Palestinian Authority leadership praises these murderers. Not a word of denunciation, reprimand or sorrow for the loss of life and acts of violence. Palestinian Leader Mahmoud Abbas has a lot to learn, and Palestinians and Israelis much to gain, from remembering history.

Just imagine if Abbas did. 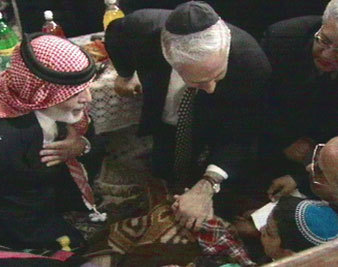