Authorities in Alaska say a family of four who vanished without a trace last year died in a murder-suicide.

According to the Kenai Police Department, detectives believe 37-year-old Brandon Jividen fatally shot his girlfriend, 23-year-old Rebecca Adams, her two children and the family dog before turning the gun on himself.

“The motive for the crime is less clear and for us to say exactly why it happened would only be speculative,” the police department said in a Wednesday press release.

The bodies found dead in March, when police began piecing together what happened.

Jividen, Adams and Adams' children -- Michelle Hundley, 5, and Jaracca Hundley, 3 -- were last seen alive at their Kenai apartment on May 27, 2014. They were reported missing soon after.

Kenai is a small city about 160 miles southwest of Anchorage.

Authorities began searching for the family on May 31, after neighbors asked police to conduct a welfare check of their apartment. The responding officers reportedly found the couple's two cars and all their belongings at the residence; however, there was no sign of the family or their dog.

Rebecca Adams' sister, Lanell Adams, told The Associated Press that her sister had been acting strange when they last spoke.

"She sounded very distressed," Adams told the AP. "She just told me: 'Know that I love you,' and she had to get off the phone very quickly."

Lanell Adams said her sister would not tell her what was wrong.

The FBI was called in to assist local law enforcement and the agencies conducted several searches in and around the family home. Those searches failed to turn up any clues and the family's whereabouts remained a mystery until March, when their remains, along with those of the family dog, were found less than a mile away from the couple’s home.

“We thought there would be closure when we buried them,” Rebecca Adams’ uncle, Dennis Gifford, told The Alaska Dispatch News. “But no. I don’t even know what closure is.” 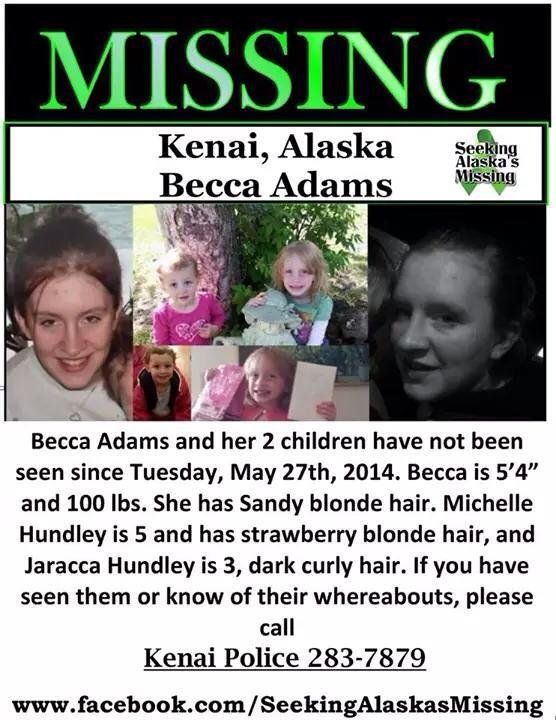