I was puzzled when I first learned about the Christian Feast of the Circumcision. The celebration, which dates to the sixth century or earlier, commemorates the circumcision of Jesus. Over the centuries Jesus' foreskin (prepuce), which many churches claimed to possess, was worshiped as the "Holy Grail" of Christian relics. The foreskin relic located in a small Church in Calcata, Italy, was deemed the most authentic. Since the 16th century the Calcata church has celebrated the Feast of the Circumcision with a parade featuring Jesus' foreskin carried in a reliquary which villagers stormed to rapturously kiss.

Unfortunately, the Calcata relic disappeared under suspicious circumstances in 1983. Christians in the parish mourned the loss. Was the Vatican the culprit in the theft, as some charged? Since 1900, when Pope Leo XIII threatened excommunication for anyone who spoke of Jesus' foreskin, the Vatican has sought to shift the focus of the celebration to Mary, mother of Jesus, rather than the foreskin. Nevertheless, foreskin celebrations continued and are favored by traditionalists like Msgr, Charles Pope.

Why would Christians, I wondered, celebrate -- no less worship -- Jesus' circumcision? Weren't differences about circumcision a major factor in the split between Judaism and Christianity?

Paul, recognized as the founder of Christianity as a separate religion, at first sought to make Judaism a world religion open to everyone, with Jesus "the Messiah" at the helm. The earliest converts to Paul's version of Judaism were Jews. For them, circumcision was not an issue -- they were all circumcised. But when Paul extended his reach to Gentiles he quickly realized that requiring circumcision would pose an insurmountable barrier to conversion. Greeks and Romans called circumcision mutilation, and they ridiculed Jews for the practice. Paul knew full well that he would meet fierce resistance if he invited uncircumcised Gentiles into the House of Israel. It's no wonder, then, that Paul, a former Torah scholar, was obsessed with circumcision, as evident in many of his epistles. Paul knew that he was challenging the very foundation of Judaism: Abraham's covenant with God: (Genesis, 17:10-13).

Paul returned to Jerusalem three times over a 25-year period in an effort to convince the disciples of Jesus, led by Jesus' brother James, to accept uncircumcised Gentiles into the Jewish fold. He was not warmly received, but he did, according to Acts of the Apostles, gain limited (if arguable) concessions. However, it was clear to Paul that Judaism as a whole would not accept the uncircumcised, since circumcision as stated in the Torah is non-negotiable (Genesis 17:14).

By the end of the first century pagans were the chief converts to Christianity. Thus circumcision was abandoned and Christianity was on its separate path, a path that increasingly distanced the new religion from Judaism.

Why then the festival of circumcision, which seems to acknowledge, if not embrace, Jesus' Jewish identity? According to one explanation, since Christianity is founded on Jewish history, prophesy, and lineage, Jesus had to be a Jew of the Davidic line to be a bonafide Messiah -- and for that he had to be circumcised as prescribed in the Torah. Without the Jewish foundation, there would be no authentic or rooted Christian story. It's important to recognize too that the circumcision of Jesus could not be denied; it's reported in the Gospel of Luke (2:21)

To bond with Judaism and at the same time to deny the connection was a shaky tightrope for Christianity to walk. One way to navigate that precarious passage was to change the meaning of the rite of circumcision to tie it in with later Christian doctrines. For Jews, the circumcision ceremony celebrates the joy and ecstasy of fulfilling Abraham's covenant, which establishes a unique relationship between Jews and God. The Christian version transforms circumcision into a celebration of pain and suffering.

"The Savior's circumcision was the occasion of the first shedding of His precious blood. The Cross overshadowed the Lord Jesus even while He lay in a crib by swaddling bands bound. The knife which cut the Lord's flesh on that day foreshadowed the centurion's spear which would pierce His side, releasing the saving torrent, the blood and water (John 19:34)."

The Christian interpretation offers the confusing dichotomy that Jesus was circumcised but didn't have to be circumcised -- that his circumcision was primarily symbolic for forecasting the coming of Christianity.

Medieval and Renaissance artists picked up on this double message by showing the newborn Jesus about to be circumcised, as in Fra Angelico's fifteenth-century painting Circumcision of Jesus. 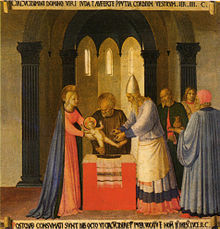 Circumcision of Jesus by Fra Angelico's by Wikipedia

Other artists of the period did the same. Yet the actual circumcision can't be found in Medieval and Renaissance depictions of the infant Jesus. In paintings of Madonna and Child in which the genitals of the infant Jesus (looking more than eight days old) are clearly shown, he appears uncircumcised. This is evident in Pietro Perugino's fifteenth-century Madonna and Child, Jan Mabuse's sixteenth-century Madonna and Child, and Peter Paul Rubens 17th century, The Holy Family with Saints Francis and Anne and the Infant Saint John the Baptist, as well as scores of others. 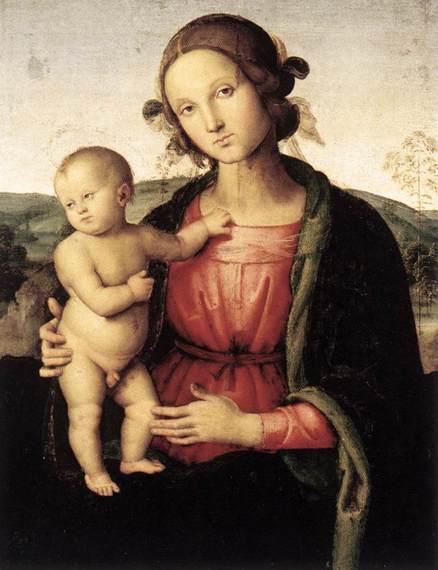 Madonna and Child by Pietro Perugino by Wikipaintings 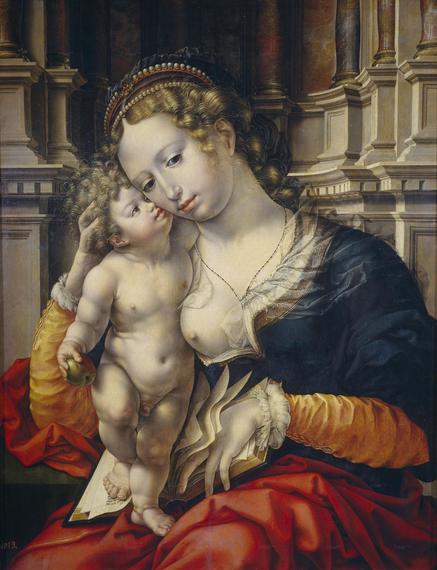 Madonna and Child by Jan Mabuse (Gossaert) by Wikimedia 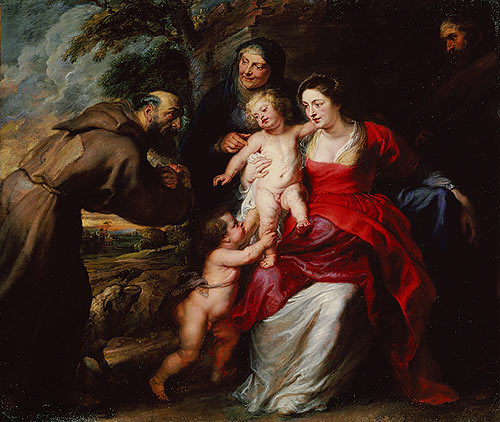 For those who wish to worship Jesus' foreskin, they can easily find it in Medieval and Renaissance artworks.

Ironically, despite the great effort to establish Jesus' messianic credentials by connecting him to the Davidic line, in Michelangelo's famous sculpture David is conspicuously uncircumcised. 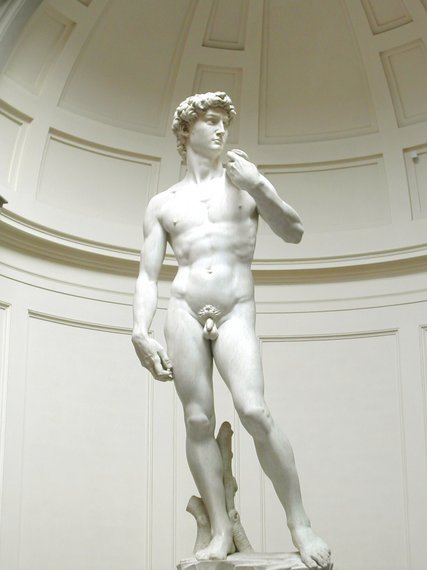 David by Michelangelo by Wikimedia

Some commentators have dismissed these falsifications as the "Renaissance style" of contemporizing figures. But contemporizing does not justify stealing identities. Whichever color, facial features, attire, or setting an artist envisions for Jesus, he still should remain Jewish.

Other commentators defend falsification with arguments like this one: "Christian artists weren't 'falsifying' Christ's ethnicity. They were presenting Christ's ethnicity according to a well-developed theological understanding that saw Christianity as the fulfillment of the shadowy revelations presented in the Hebrew Bible."

This argument confuses two things: Jesus' ethnicity and the Christian belief that he fulfilled [Jewish] prophesy. Jesus' ethnicity was Jewish. The fact that he may have (according to Christian theology) fulfilled biblical prophecy doesn't erase his identity. There are two sides to the Jesus story: Jesus the dedicated Jew and Jesus whose life and teachings inspired a new religion. There is no justification for eliminating one side of the story.

And this comment: "Isn't the author committing a fundamental fallacy by ignoring the historical context in which pre-modern artists were producing their works?"

It's unlikely that Medieval and Renaissance artists were advocating theology. More likely they were giving patrons, on whom they depended for a living, what they wanted: Christianized art. If a painter dared to depict Jesus' Jewish heritage and identity -- let's say by picturing Jesus preaching and praying in a synagogue (which he did regularly according to the Gospel of Luke 4:16) -- this would not only put that artist out of business but would most likely deliver him to the Inquisition for heresy. If anyone doubts that scenario, consider that as late as the 19th century (1879), German painter Max Liebermann incited outrage for his painting of a young Jesus (The 12-Year-Old Jesus in the Temple with the Scholars) who appeared Semitic to many viewers. As a result of the public uproar, Liebermann redid the painting with a blond Aryan-looking Jesus. The new version pleased the critics.

With respect to "ignoring" historical context, the historical context explains why falsifications could be so pervasive yet stand unchallenged. At the time, Jews were demonized, marginalized, and persecuted -- as well as charged with killing Jesus. In that historical context artists wouldn't dare offer a Jewish Jesus to a patron.

The dismissive comments also ignore the fact that setting Jesus apart from Jews -- implying that Jesus and Jews were ethnically and religiously different, and in conflict -- gave further license for the absurd charge that Jews were collectively responsible for the crucifixion. And these distortions had dire consequences for Jews.

Art historians, curators, and critics offer extensive commentary on the minutest details and nuances of artworks but ignore the glaring and obvious falsification of biblical history.

In today's spirit of reconciliation, which Pope Francis recently expressed, it's time to acknowledge these falsifications. The art exhibit that I'm organizing (Putting Judaism Back in the Picture: Toward Healing the Christian/Jewish Divide) intends to accomplish just that -- and more. The seven talented artists who have joined the exhibit will offer new renditions of existing works from the Medieval and Renaissance periods, as well as original artworks that include both sides of the Jesus story.