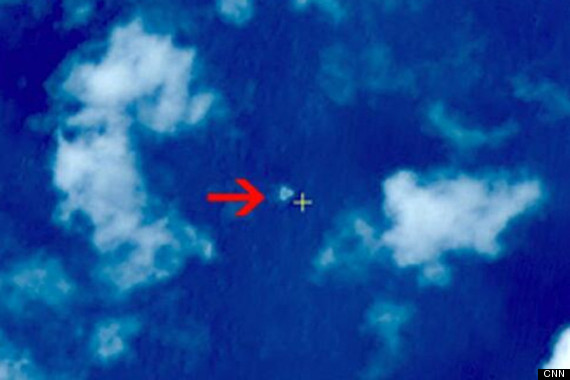 According to the network, the images were distributed by China's State Administration for Science, Technology and Industry for National Defense and were captured on March 9, one day after the plane went missing.

The three images appear to show white objects floating in the water. Coordinates released with the images place the objects in the sea between Malaysia and Vietnam, the BBC notes.

The Guardian notes that the site appearing on the images is located not far from the last confirmed radar contact with the plane.

Malaysia Airlines flight MH370 went missing on Saturday after taking off from the airport of Kuala Lumpur for Beijing with 239 people on board.

Civilian radars last picked up the flight shortly before 1:30 a.m. on Saturday. Five days later, there was still no confirmation of what happened to the Boeing 777.

Malaysia's Defense and Acting Minister of Transport Hishammuddin Hussein said during a press conference on Wednesday that the search for the plane had been expanded to two areas: its last known position over the Gulf of Thailand and the area near an unconfirmed radar plotting where the Malacca Strait meets the Andaman Sea. He said 42 ships and 39 aircraft from 12 countries were searching nearly 27,000 square nautical miles.

The report Wednesday says the images from around 11 a.m. on March 9 appear to show "three suspected floating objects" of varying sizes.

The report includes coordinates of a location in the sea off the southern tip of Vietnam and east of Malaysia, which apparently was part of the original search area after the plane disappeared early Saturday. The images were posted on a national defense technology website.

The Xinhua report says the largest of the suspected pieces of debris measures about 24 meters (79 feet) by 22 meters (72 feet).

The search for the missing plane, which left Kuala Lumpur for Beijing, has encompassed 35,800 square miles (92,600 square kilometers) of Southeast Asia and on Wednesday expanded toward India.

Two-thirds of the passengers on the flight were Chinese, and the Chinese government has put increasing pressure on Malaysian officials to find solve the mystery of the plane's disappearance.

Also, Wednesday, it was revealed that the last message from the cockpit of the missing flight was routine. "All right, good night," was the signoff transmitted to air traffic controllers five days ago.

Then the Boeing 777 vanished as it cruised over the South China Sea toward Vietnam, and nothing has been seen or heard of the jetliner since.

Those final words were picked up by controllers and relayed Wednesday in Beijing to anguished relatives of some of the 239 people aboard Flight MH370.

The new Chinese reports of the satellite images came after several days of sometimes confusing and conflicting statements from Malaysian officials.

Earlier Wednesday, the Malaysian military officially disclosed why it was searching on both sides of country: A review of military radar records showed what might have been the plane turning back and crossing westward into the Strait of Malacca.

That would conflict with the latest images on the Chinese website.

For now, authorities said the international search effort would stay focused on the South China Sea and the strait leading toward the Andaman Sea.

"There's too much information and confusion right now. It is very hard for us to decide whether a given piece of information is accurate," Chinese Foreign Ministry spokesman Qin Gang said in Beijing. "We will not give it up as long as there's still a shred of hope."

"We have nothing to hide," said Malaysian Defense Minister Hishammuddin Hussein. "There is only confusion if you want to see confusion."

Flight MH370 disappeared from civilian radar screens at 1:30 a.m. Saturday at an altitude of about 35,000 feet above the Gulf of Thailand between Malaysia and southern Vietnam. It sent no distress signals or any indication it was experiencing problems.

The Malaysian government said it had asked India to join in the search near the Andaman Sea, suggesting the jetliner might have reached those waters after crossing into the Strait of Malacca, some 400 kilometers (250 miles) from the flight's last-known coordinates.

Malaysian officials met in Beijing with several hundred Chinese relatives of passengers to explain the search and investigation, and to relay the last transmission that Malaysian air traffic controllers received before the plane entered Vietnamese airspace, according to a participant in the meeting.

Aviation officials in Vietnam said they never heard from the plane.

Its sudden disappearance led to initial speculation of a catastrophic incident that caused it to disintegrate. Another possibility is that it continued to fly despite a failure of its electrical systems, which could have knocked out communications, including transponders that enable the plane to be identified by commercial radar.

Authorities have not ruled out any possible cause, including mechanical failure, pilot error, sabotage and terrorism, and they are waiting to find any wreckage or debris to determine what went wrong.

In June 2013, Boeing issued a safety alert to Boeing 777 operators, telling them to inspect for corrosion and cracks in the crown fuselage around a satellite antenna. The alert says one airline found a 16-inch crack in one plane, then checked other 777s and found more cracking.

Two U.S. Federal Aviation Administration technical experts and a regional representative are in Kuala Lumpur as part of an NTSB team supporting the investigation. Experts in air traffic control and radar are providing technical help, the board said.

Hishammuddin described the multinational search as unprecedented. Some 43 ships and 39 aircraft from at least eight nations were scouring an area to the east and west of Peninsular Malaysia.

"It's not something that is easy. We are looking at so many vessels and aircraft, so many countries to coordinate, and a vast area for us to search," he told a news conference. "But we will never give up. This we owe to the families of those on board."

Confusion over whether the plane had been seen flying west prompted speculation that different arms of the government might have different opinions about its location, or even that authorities were holding back information.

Earlier in the week, Malaysia's head of civil aviation, Azharuddin Abdul Rahman, was asked why the Strait of Malacca was being searched and replied, "There are things I can tell you, and things I can't," suggesting that the government wasn't being completely transparent.

If all those on board are confirmed dead, it would be the deadliest commercial air accident in 10 years.

Choi Tat Sang, a 74-year-old Malaysian, said his family is still holding out hope that the plane and all on board are safe. His 45-year-old daughter-in-law, Goh Sock Lay, was the chief flight attendant. Her 14-year-old daughter, an only child, has been crying every day since the plane's disappearance.

"We are heartbroken. We are continuing to pray for her safety and for everyone on the flight," he said.