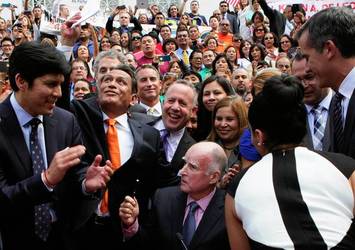 Missing from that list is the smiling woman right behind Brown. That's Angelica Salas, executive director of Coalition for Humane Immigrant Rights in Los Angeles (CHIRLA), a key leader of the immigrant rights movement in California and nationwide and a major force behind passage of the bill that Brown was signing. Salas is also missing from the news story that accompanied the photo. The article quoted politicians and law enforcement officials, but none of the activists whose years of work resulted in this new law as well as several other recent legislative victories, including a domestic workers bill of rights and an increase in the state minimum wage to $10 an hour.

Missing entirely from the photo in the Los Angeles Times, but shown in the photo below, is Maria Elena Durazo (on the right, holding the camera), the elected leader of the Los Angeles County Federation of Labor. Durazo has been a key force in bringing the national labor movement around to become a major advocate for immigrant rights. (The photo was published in La Opinion, the Spanish-language paper that devotes significant space to the immigrant rights movement). 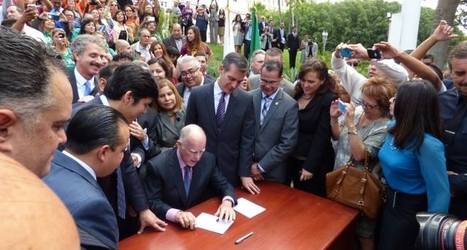 Gov. Brown clearly understands how important Salas and Durazo and their constituencies were to the drivers license law and other legislation, which is why he invited them to stand so close to him during the signing ceremony. And it was no accident that Brown chose to sign the bills during a weekend when activists were in the streets marching and voicing their concerns.

The caption in the Los Angeles Times, however, is typical of how the mainstream media often ignores movements.

Consider an article in Sunday's New York Times headlined "Thousands Rally Nationwide in Support of an Immigration Overhaul." The 1,000-word article examined rallies and marches by immigrant rights activists in more than 150 cities in 40 states, designed to pressure Congress to enact path-to-citizenship legislation. The article included reports and photos from several cities and interviews with participants in several of the demonstrations.

As a description of the events, the story is fine. But the story provides readers with no understanding of how such a massive and successful series of protests happened. The story gives to credit "organizers." "supporters," and "advocates" who had organized the events, but fails to mention the names of any people or organizations who were responsible for coordinating the national day of action.

Simultaneous events in dozens of cities across the country -- with common demands and slogans -- don't happen spontaneously. These events -- as well as the large rally planned for Tuesday on the National Mall in Washington -- happen because of the existence of a network of national and local organizations and activists that includes paid staff and volunteers. For example, Salas' group, CHIRLA, works closely with allies in local labor unions, religious and community groups, high school and college campuses, and business organizations in Los Angeles and California as well as with several national groups like United We Dream and the Alliance for Citizenship.

The national immigrant rights groups coordinated with local organizations in cities and states around the country. In Boston, dozens of groups, coordinated by the Massachusetts Immigrant and Refugee Advocacy Coalition, helped orchestrate a successful march (photo below) through the city's downtown. 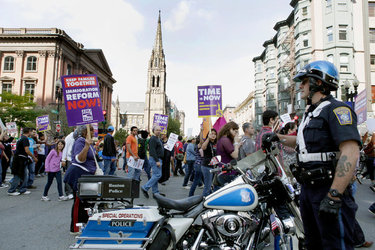 Similar marches in Los Angeles (left) , Birmingham (right), and many other cities, were organized -- via meetings, phone calls, emails, and text messages -- by national, state and local activists and groups. 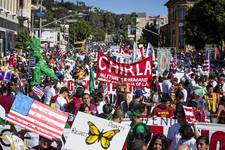 This is what's meant by an immigrant rights "movement " -- a complex web of people and groups that work together to plan lobbying days, bus caravans and meetings to pressure targeted elected official whose votes they hope to sway, coordinate with sympathetic politicians (such as Gil Cedillo, whose persistence keep the drivers license bill alive for more than a decade), organize rallies and marches, develop websites and social media outreach, and discuss legislative strategy, including what parts of the proposed federal law are essential and what parts can be reluctantly compromised for the sake of enacting reform legislation.

Most major media outlets cover dramatic protest rallies and marches, which are designed to draw attention to issues, shape public opinion, and influence politicians. Local papers, TV stations, and radio stations cover the events in their cities. But they rarely see those local mobilizations as part of a larger movement. (To give the Los Angeles Times credit where its due, Sunday's wrap-up story on Gov. Brown's support for immigrant rights legislation put the issue in broader perspective and quoted a movement activist, Reshma Shamsunder, executive director of the California Immigrant Policy Center). Few media outlets have full-time reporters assigned to cover movements, so they can get to know the people and perspectives emerging from both local grassroots groups and national umbrella organizations.

But few newspapers, magazines, or broadcast networks have reporters who cover the immigrant rights movement (or the labor movement, for that matter). There are a few exceptions, such as Julia Preston, who covers immigration for the New York Times and frequently reports on the activities of movement groups, and the Times' labor reporter Steve Greenhouse).

For the most part, however, reporters for the mainstream media cover the political maneuvering in Washington, D.C., or state capitals, or city halls, where they have already assigned reporters. They don't cover the day-to-day lives of ordinary workers and immigrants, nor the movement groups that help give voice to their problems, fears, and hopes.

As a result, politicians dominate most stories about key issues, pushing the movements to the margins. Almost every American who is paying attention to the news knows the name of Senator Ted Cruz, but how many can name an immigrant rights or labor leader?

That's not because charismatic and quotable movement leaders don't exist. Its because the mainstream media suffer from movement myopia.

Peter Dreier teaches politics and chairs the Urban & Environmental Policy Department at Occidental College. His most recent book is The 100 Greatest Americans of the 20th Century: A Social Justice Hall of Fame (Nation Books).