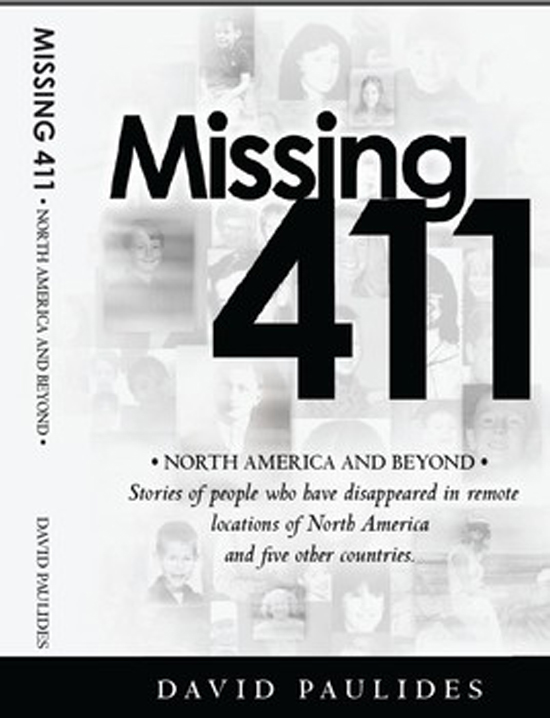 Authorities and researchers may be overlooking common details that seem to tell a bizarre story about missing persons. When the facts are reviewed over longer periods of time - the results are rather unsettling.

Inside David Paulides' latest book in his "Missing 411" series -- North America and Beyond -- is a running mystery with obvious overlapping clues. The idea is made in a rapid-fire unfolding of details in case-after-case that perhaps authorities are overlooking the common threads tying it all together.

Most missing person cases get a lot of media attention quickly as usually hundreds of volunteers and trained searchers from multiple agencies make the attempt at locating the individual. But after a predictable number of days, based sometimes on their location and age, searchers abandon the case and assume the victim cannot have survived and is dead.

In other cases, the victim is found, dead or alive, and everyone goes home.

Paulides concentrates his research on rural cases with a particular criteria. Included on that list: People who go missing with their canines; missing found near creeks, rivers or other bodies of water; bad weather follows the disappearance; shoes or other articles of clothing are missing and never found; and berries are somehow related.

While that is only a partial list of what the author looks for, Paulides has assembled an incredibly detailed group of cases from across North America with very common and overlapping details. If you look at just one or a few cases - you don't see it. But if you continue to read and follow along with even a few dozen cases - you understand that these simple details are telling a story.

The horror in the book is how quickly some people go missing. They are there one minute and gone the next. And when friends or family quickly try and locate the person in the immediate vicinity, they are nowhere to be found. Being last in line -- often the person disappearing -- is another common element.

For those who go missing meeting Paulides' criteria and are found -- you will read that they either cannot say what happened to them, often due to their young age, or have rather foggy memory of what happened. One woman stated that she was walking around in very unfamiliar territory and did see other people, but they could not see her.

Two men who read one of Paulides' books in this series wrote to report they were walking on their family farm, property they were familiar with their entire lives, and encountered rather odd circumstances. First, they said, they realized that all sound had disappeared around them - the sounds of nature. Then they realized that although they were sure they were on the family property, they suddenly could not identify their surroundings. They soon walked out of what they felt was a "portal" and back into familiar grounds.

The author has also concluded that many people go missing in National Parks -- vast areas of open land -- but no one is keeping track of that. Paulides is actually alarmed at the number of people, over time, that go missing from some of our National Parks. Two park rangers actually confronted Paulides and privately acknowledged that the series of missing persons -- over time -- was not getting any media attention.

But the case for missing people grows darker when another clue emerges in the research over time.

There are very certain clusters of missing people from around the country -- certain areas of just one or two or three-mile areas, where higher numbers of people go missing. And the rather startling and weird fact is that they go missing over a long period of time.

"The disappearances occur at such intervals as not to raise an alarm to law enforcement, yet do show a consistent pattern," Paulides writes on page 124.

While there are lots of cluster area, the entire state of Pennsylvania is considered one big cluster. Pennsylvania had the most number of missing children go missing between 1934 and 1957; then mysteriously after an 11-year gap in cases, they start up again, but with a higher age group.

Paulides sites one particular case that has "every element in it" described in past books.

The following is a summary of elements in this case taken from page 109:

Casey was eventually found -- 48 hours later -- just one mile from his aunt's home, "babbling and seemed in a daze."

The point Paulides makes over and over again in his book is that large pieces of these stories do not make sense. How do people go missing so quickly? Why do people who go missing move in difficult ways and go into harder to walk areas? Why do shoes go missing? Why are there so many simple details that overlap between cases? Why is it that people who are out berry picking have a higher rate of going missing?

If you like mystery and detective novels -- with a hint of the paranormal -- this is a very real and up close accounting of a long-term mystery with, as of yet, no reasonable explanation.

Paulides' books can be purchased at your favorite online bookstore -- or from this link.