Iceman: You're everyone's problem. That's because every time you go up in the air you're unsafe.

Wait a minute. John McCain's a navy aviator... and a maverick! And isn't his vanishing lobbyist gal pal named Vicki Iseman? Iseman? ICEMAN? Viet cong... VC... VICKI!!? She's his comrade... and his enemy! Connect the dots, people. Then do the math. Then wake up and smell the coffee. Then drink the coffee. I'll wait right here.

Eliot Spitzer's hooker has a song and we still haven't even heard John McCain's lobbyist speak. What gives?

And don't tell me she's not newsworthy. If there's no news value in a vacant-looking, pie-faced blonde nitwit who's never done anything, explain Heidi Montag.

Maybe, in about ten years or so, The Atlantic can rip the lid off Heidi Montag. It won't be any staler than this month's cover story on Britney Spears. (Did you know she's often followed by paparazzi? It's true!) Also in this issue, there aren't as many dead Iraqis as bleeding-hearts think, the Seventies were a good era for movies, and Christopher Hitchens finds Ezra Pound talented but controversial. Goddamn, what an awful magazine.

A couple of quick thoughts on the Atlantic's Britney story:

"The night is darker than usual, owing to smoke from a dozen wildfires that are burning as close as Malibu and around Lake Arrowhead."

Oooo... eerie. Except Lake Arrowhead is almost a hundred miles from where the author says he's sitting. Does he mean, "as close of Malibu and as far away as Lake Arrowhead?" Is fire that frightening? Is he Frankenstein's monster? What about the volcanoes "as close as Costa Rica?" They could blow any minute.

"It was easy to imagine legions of Internet-era Andrew Marvells staying up late in fluorescent-lit cubicles appending metaphysical exclamation points to celebrity photo captions that would rocket readers ever closer to the celestial objects of their desire..."

Easy for you to imagine. Why drag Andrew Marvell into this? What did he ever do to you?

"It is impossible for anyone who has spent even a modicum of time in the comments section of a celebrity blog to look at paparazzi pictures in the same way..."

Modicum sounds like "molecule," so children and science fiction writers think it means "small amount," but it doesn't. It means a moderate amount. So "even a modicum" doesn't tell you anything. It's like saying, "Anyone who eats even a fair amount of food will taste it." Or: "Reading even a number of pages of the Atlantic is a waste of time."

-- Radios probably shouldn't "crackle" three times in the same article. I'm also not sure anyone's ever actually heard a radio crackle, except when a creative writing class was reading their work aloud.

-- Kevin Federline can't be "fecund" unless women are always impregnating him. The field is fecund, the farmer less so. Maybe some other word would be better? Or none at all?

-- "Diagonally across the street, the core of the decayed downtown is wrapped around Frank Gehry's undulating, steel-clad concert hall, which looks like a giant steel-capped molar in a mouthful of rotting teeth."

One: It doesn't, and two: Oh my god. Disney Hall doesn't look any more like a steel-capped molar than your momma does. It is silvery, I suppose, but so are barracuda, Klondike bars, and the back of Steve Martin's head.

Also, it's not sitting in a mouthful of rotting teeth. Look: 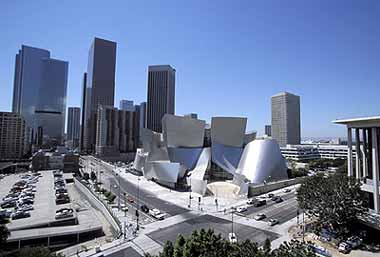 Does the non-existent urban (tooth) decay around Disney Hall make Los Angelinos gingivitis? Is the Staples Center a uvula? Or does it have to be the same color? Did you just take the Atlantic's travel money and stay home like a fluorescent-lit Andrew Marvell? Should you get some other kind of work, perhaps at a store?

Are you related to someone?

Speaking of Top Gun and blonde women who were never seen alive again, whatever happened to Kelly McGillis?

Shouldn't she be a psychiatrist on HBO or a lesbian on Showtime or something? Wait a second... Kelly McGillis: Lesbian Psychiatrist... in the old west! Call it Rio Lesbo. No. Dr. Queer: Medicine Woman. No. Stagecouch?

I've got to make a call.