This past March I had the opportunity to spend four days in the Beartooth Mountains with a group of fellow veterans and supporters examining the changing eco-system grizzly bears are trying to adapt to. 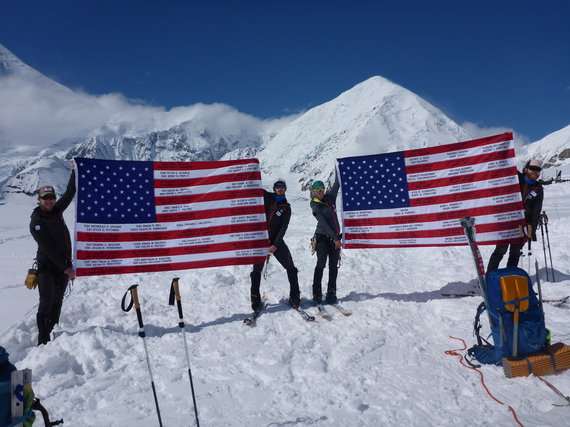 One of the veterans I met was Josh Jespersen, who along with fellow veterans Margaux Mange, Nick Colgin, & Brian McPherson, launched Mission Memorial Day last year as a way to 'take Memorial Day back'

I caught up with Josh recently to talk about what Mission Memorial Day is, what he wants it to be, and how it all got started. Here's some of our conversation:

What is Mission Memorial Day?

It's a commitment, a commitment that myself and three other combat vets made to ensure that our friends we lost overseas, and so many other young Americans would be remembered. We don't take Memorial Day lightly, and the fact that its true meaning has largely been distorted is a cause for us to continue service to those that didn't make it back. So many Americans either lost a loved one in some conflict overseas, or knew someone who did, and it's time that they help us reverse the flow of misrepresentation that Memorial Day has become. MMD was founded in early 2015 by myself, Nick Colgin who was an Airborne combat medic in Afghanistan, Margaux Mange who spent 23 months in Iraq as an Army MP, and Brian McPherson who was a Marine Infantryman. Our link to Memorial Day is deep, as we lost a number of friends overseas and we made it a priority to honor them and others in epic fashion. We decided that carrying American flags on our backs bearing their names was appropriate. To really do them justice though, it had to be on arduous expeditions to the top of incredible peaks. So we made taking back Memorial Day a post service mission.

What gave you the idea for doing this? How did it start?

On the anniversaries of your dead buddies, vets normally go down to whatever grimy hole in the wall bar and start throwin 'em back until funny stories begin to roll out about whichever comrade lost his life on that day. You try to make the night what you imagine the Valkyries plucked the dead warriors off the battlefield and carried them off to Valhalla to do. It always eventually settles down though, and somberness creeps in. In this instant, after playing the role of a war vet over and over, I caught myself staring at that lone tributary drink for the fallen and saying I had done this too many times. Too many times throughout the year, on too many different dates engraved in my mind. It was time to rewrite the script on how my boys would be remembered. So instead of drowning my sorrows, I started going outdoors on these days, and crushing myself. On an anniversary when 17 brothers from my very small tribe were killed, I hiked 17 miles roundtrip with my snowboard on my back to shred a glacier with 2,000 feet of 45 degree pitch. On another anniversary of my best friend getting killed I hiked 19 miles round trip to free solo an 11 pitch 5.7 climb up an incredibly aesthetic peak. Those days morphed from dingy bar rooms and bad whiskey, to the salt from dried sweat and doing something rad to remember. Then one day I got an email from Brian asking me to go on a guided trip to Denali with him, I wrote him back and said yea, but we can do it our own. So we got a hold of Nick and Margaux, and set our dates. Nick lamented Memorial Day recognizing that it was during our timeframe, saying how happy he would be when we were on the mountain and away from the beginning of summer celebration it has become. At that point, we all instantly acknowledged what we needed to do. Start MMD. 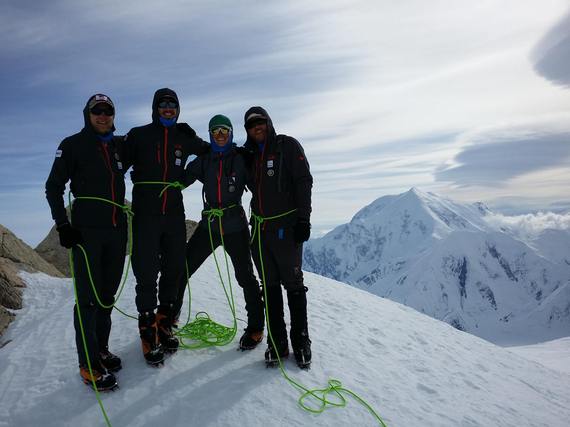 What are you hoping to achieve?

To revitalize what this holiday is supposed to be about. Ya know, Margaux found herself on the set of The View last spring, totally out of her element, and they happened to be pre-taping their Memorial Day episode. She was excited, and then she asked about the content. Her emotion turned when she found out the episode was going to have a segment on spring fashion. I just read that King Island is opening a seven story water slide on Memorial Day this year. We have collectively forgotten the point, and are missing the mark. It's not a holiday about you, or me, or BBQ's, or mattress sales. It's strictly about the names that adorn war monuments. Our brothers and sisters who can't enjoy the luxuries taken for granted that have become what their day is all about. We want to take it back.

For those of us watching at home, veterans or non-veterans, what are you hoping to inspire?

We want to inspire a dismissal of the current norm for the last Monday in May, and an embrace in a dutiful remembrance of our loved ones. The day is about honoring their sacrifice, by decoration of monuments and graves, or by my form of pushing myself to exhaustion and fulfillment while we carry names of the fallen. MMD does this because we made it back, and we have to live, and simply for the reason that we're living for a lot more people than ourselves. So for vets, our goal is to inspire them to not play out the bar scene I described and spur on a movement with us. To non-vets we ask that you don't be satisfied on Memorial Day because you thanked a vet for their service. The day isn't about living service members, and that doesn't cut it. Please find a way to make the day bigger than yourself.

Why Denali? It seems like a big expense and a lot of time, why not something in the lower 48?

Because they deserve it. They deserve a grand statement that says, we will never let your passing be in vain. Denali is a sizeable expense and a huge commitment, but it doesn't compare to the commitment we all made fighting in foreign lands or the price many paid. We chose to start MMD on Denali because it is the top of North America, and where better to have our flags inscribed with memorialized names whip in the wind. Why Denali? It's hard, committing, glaciated, turbulent, and can take your life if you're not careful. Why not? MMD will take that challenge. Also, it has to be something big and burly like Denali to get people's attention. If it's not, it will just be drowned out by all the other noise that people spin on Memorial Day; used car sales, mattress sales, and half priced amusement park tickets. People need to pay attention to the sacrifices made by others in service to our country, and if you make it a big statement, it's harder for them to ignore that. As for peaks in the lower 48, we're hoping those challenges get taken on too by the people who take up our message. 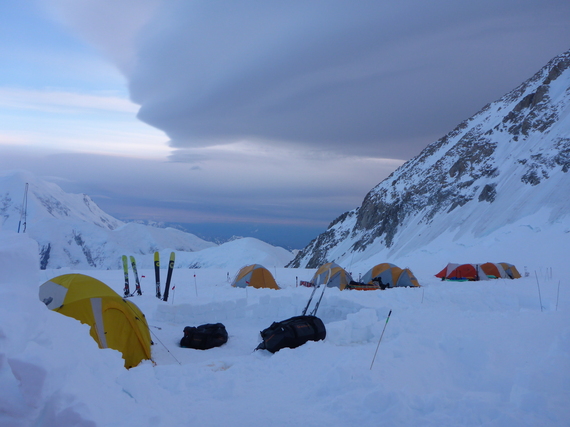 How can people participate in Mission Memorial Day?
All the way up until Memorial Day, we ask that people participate by submitting names on our website for us to carry up Denali. You can also submit a story about the person you want us to honor. Then, on Memorial Day, we hope that everyone can join us in carrying names of the fallen with them to the high places of our country. We'd ask that flags are at half-staff until noon, and then raised to full-staff. We ask that you lay a wreath, or wear a red poppy. Do whatever you can to bring back the true meaning, and let us know all about it.

10 years from now what do you hope to see happening with Mission Memorial Day? Will you have summited or tried to summit Denali 11 times?

No, we plan on achieving many other goals by then. Denali is the beginning, and there are many other peaks and poles to plant our flags on. Troops don't just die on Memorial Day. In fact, the original date of May 30th was chosen because there was no major battle on that day. So we want to expand Memorial Day, we want to celebrate it every month. We want to show up to communities around the country, and take the people who lost someone on a climb so they can wave their flag. We want to peg first ascents, and name them after fallen soldiers. Our sights are high, and returning to Afghanistan to summit some of those peaks in honor of the ones who didn't come back from OEF is not out of the question. Outside of where we go and when we do it, we would love to get to a point where we don't have to spread the word anymore, because we caused a paradigm shift. We want to be supporting efforts on Memorial Day, and not persuading them.

What has helped you in your return home from war?

Well I never saw it as a return home from war really. It was a job that I willingly signed on the dotted line to go to, and when I thought the job was finished it was on to the next adventure. So I guess that's it, always having a goal on the horizon, but something that has purpose as well. Its uber important to me also to maintain a network of friends who are vets, because in no way do I want that chapter of my life to be forgotten. I need people in my life that I can be outrageously inappropriate with, and not be judged. There is something to be said for a friend that will toss rocks in an upside down Kevlar with you for hours over there, and pull you out of a ditch at a moment's notice over here.'

What words of advice would you give to your past self on the eve of your enlistment?

Keep a journal. My memory is pretty photographic, so I have snapshots, but I have lost out on the details of so many conversations and great one-liners describing dismal situations. Like I could paint you a picture of our cookies face his first day on our football field sized FOB in Afghanistan when he was trying to serve me lunch in an open air kitchen during a full-on mortar attack. Unfortunately though, I couldn't repeat his story that had us rolling about him trying to shower after soiling himself during the attack and realizing we were living in the Stone Age with the closest hot water being a hundred miles away.

What are your goals in the mountains?

To live life to the max, and drink it up. Dive head first into the fray, and dance on that fine line of adventure when you're actively keeping risk in check. Pure fun with friends is always good too.

To submit a name for Mission Memorial Day or learn more about what Josh and his team hope to achieve take a look at their website here: http://www.missionmemorialday.com/make-a-difference.html 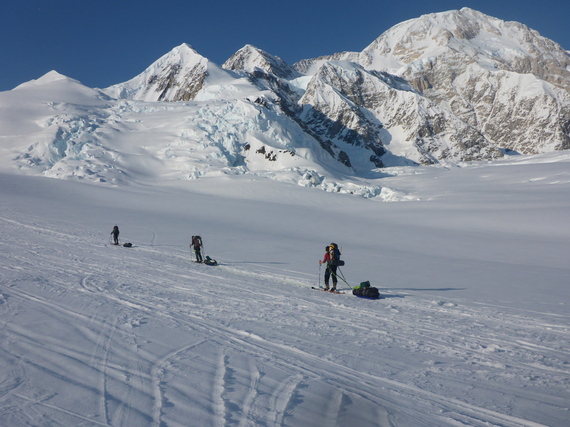