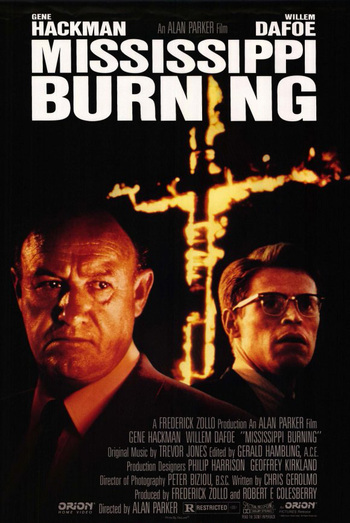 Mississippi Burning, written by Chris Gerolmo, was nominated for seven Academy Awards in 1989.

Every year or two there's an important movie that gets into trouble between its release and the Academy Awards. This year, The Wolf of Wall Street seems to be taking a lot of heat. Twenty-five years ago, the movie that did so was one I wrote. Mississippi Burning.

Mississippi Burning was released in the last weeks of 1988, in order to qualify for the 1989 Academy Awards. Within a matter of days, it was selected by the National Board of Review as the Best Picture of the Year and became the odds-on favorite in Las Vegas to win the Oscar for Best Picture too. But by the time the awards show rolled around on

March 29th, it was no longer even in the running. What went wrong in the intervening weeks? Well, in order to tell you that story I have to back up a little first.

I conceived and wrote Mississippi Burning on my own. One day in 1985, sitting in my father's office on 28th street -- he produced plays off-Broadway -- I read an article in the Post excerpting a chapter of a then-new book called Inside Hoover's FBI. It was written by two agents who had worked on the case of the three civil-rights workers who were murdered in Mississippi in 1964. In it they made it clear that under intense pressure from Washington, they had gone to considerable extra-legal lengths to solve the case. They had shot up taverns where Klansmen were known to gather. They had beaten people up. They had intimidated and threatened and bribed others. The hair on the back of my neck stood up. I was just an aspiring screenwriter at that time, but this was the best idea for a movie I had ever stumbled across. I immediately read the one decent book that had been written at that time about the case, Attack On Terror; The FBI Against the Ku Klux Klan In Mississippi, and my enthusiasm for the idea only grew.

So I wrote a screenplay. I wrote it in my rent-controlled apartment on 89th and 3rd. I wrote it as a big, passionate, violent detective story set against the greatest sea-change in American life in the 20th century, the civil rights movement. I felt as I was doing so that I was honoring the legacy of people like my mother, who marched from Selma to Montgomery with Dr. Martin Luther King. I remember my dad seeing her off to that march at the door to our apartment with a peanut-butter jar full of martini and a box of Band-Aids. He told her only, "Don't get hurt." That was 1965. I was 12 years old.

In 1989, I was 35, and my movie had just come out to great fanfare when four days later Coretta Scott King, widow of Martin, wrote an editorial for the LA Times attacking it for being "inaccurate" because it "centers on the trials and tribulations of white people" and thus "reduce(s) real life black heroes to bit players in their own drama."

Ouch. The movie does center on white people of course -- it's about the FBI and the Ku Klux Klan -- but the charge of being "inaccurate" was tough to swallow. Given the latitude generally granted movies that were only "Based On" real events, I thought I'd managed to stick pretty close to the facts.

The other thing that was tough to swallow was that Coretta Scott King hadn't seen the movie. She wasn't exactly forthright about it, but she was careful to make it clear. She started by saying that the movie "hasn't opened here in the heart of the South as of this writing," and went on to couch everything she said in terms like "reportedly" and "by all accounts." She also put her most serious attacks in the mouths of "some critics." When I read her article more carefully I realized that she didn't actually mean we were inaccurate in telling the story we were telling either. She meant that she thought we had picked the wrong story to tell. She meant that we should have made a black movie about the civil rights movement -- presumably one about her deceased husband, for instance, which is to say one I would never have presumed to write -- and not a white one.

But none of that seemed to matter to anybody but me; neither the fact that she hadn't seen the movie nor that she didn't exactly mean it was inaccurate. Her editorial was reprinted in some 1350 other newspapers nationwide, and was remarkably influential in shaping the subsequent public dialogue about the movie.

For instance, when the movie made the cover of Time on Jan. 9, 1989, it did so under the subtitle "A new movie's searing view of racism stirs a debate over fact vs. fiction," the clear implication being that we had made things up. And the tone of the main article inside was no more friendly than that. It's primary criticism was the same one Coretta Scott King had made; that the movie was "inaccurate" because it misrepresented the history of the black struggle for freedom and equality in America by being primarily about whites.

By way of illustrating how quickly and completely we had become the Bad Guys, I'll tell you a story. I remember going to a Thai restaurant in LA that week to join a couple of friends. When I walked in, one was wearing a brown paper bag on his head with holes cut out for his eyes and the words "Nothing to do with Mississippi Burning" scrawled across the top of it. The other was wearing one that read "Me neither!" I thought it was hilarious, but it certainly captured the miserable mood of the people associated with the movie.

On January 16th, which not coincidentally was Martin Luther King Day that year, the primetime news magazine show "Nightline" devoted an entire episode to the movie. They invited Gene Hackman to represent the movie, and Julian Bond to represent the black community. And of course, Julian Bond attacked the movie for its historical inaccuracies, and Gene did his best to defend it as a good movie. But it was a massacre.

Anyway, by then we had no chance of winning any of the important Oscars. No respectable member of the Academy was going to stand against this tide. And while very few in the media had been interested in talking to me, the writer, about the problems they had with the movie, my fellow screenwriters were certainly willing to hold me responsible for them. The morning the nominations came out, my agent woke me at 5:15 -- they come out at 8:00 a.m. in New York -- and said he had good news and bad. The good was that the movie had gotten seven nominations. The bad was that I hadn't been nominated. Oh well. How a movie that's good enough to garner seven nominations gets that good without an equally good screenplay, I'll never know, but okay. I guess somebody had to take the fall.

How do I feel about all this 25 years later? Well, I'm over my disappointment about the Oscars, certainly. And the movie has had an incredible life on television, in part because when Orion Pictures shut its doors, the rights to its library went to Turner Broadcasting. They must have shown the movie on their various cable outlets 500 times over the years. Far more people have seen it on TV than ever saw it at the movies. That's a good thing.

At the same time, the criticism still lingers. I remember walking into a bookstore in Aspen CO years ago with a friend of mine, the very funny screenwriter Dale Launer, whose one directing effort had been an unsuccessful comedy called Love Potion Number Nine. On a whim, we pulled out a famous movie guide from the stacks and looked up what it said about our movies. This particular guide called Love Potion Number Nine a failure but a good-hearted and amusing one, and gave it an overall rating of A-. It called Mississippi Burning manipulative and dishonest, and gave it an overall rating of C+.

As far as the charge of misrepresenting the history of the civil rights movement by writing about white people who were involved in it is concerned, well, I'm afraid I never completely bought that one in the first place. It's certainly fair to describe the civil rights movement as a black movement led by heroic black men and women, many of whom gave their lives for the cause. But it's also fair to say that one of the main reasons it worked was because of white people's reactions to it. White people all over the United States watched on television as peaceful black people linked arm in arm with their white supporters were hosed down by vicious white cops with German shepherds. And they didn't like it. They didn't think that should happen in America. They still thought of their country, rightly or wrongly, as the Land of the Free and when they saw officials in the south behaving like Nazis they objected. And their objections empowered the federal government to move into Mississippi and other southern states and enforce our national standards and laws as opposed to the local standards and laws. And things began to change. And to that story, to that side of history, to my mother's side of it, we were utterly and impeccably faithful.

Anyway when I think about Mississippi Burning these days, I don't think about any of that. Honestly. I've only dredged it all up because I wanted to write this article. What I think about now when I think of the movie is this. A documentary called Long Night's Journey Into Day came out in 2001, about the Truth & Reconciliation Commission in South Africa after the fall of Apartheid. In it, a white policeman who admitted that he assassinated four black activists on behalf of the previous regime talks to the camera about why he came forward, about what it was that changed his perspective. And the first thing he talks about, before he mentions Nelson Mandela's autobiography, is Mississippi Burning.

Well, shoot. That's something. To hell with the critics and the Academy too. In however small a way, we might have influenced the history of a nation for the better right there. How many times do you get to do that in a screenwriting career?