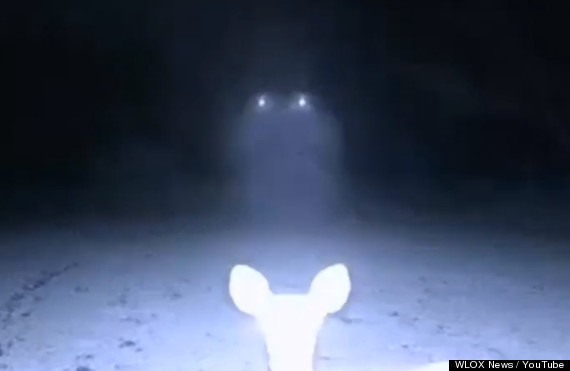 What were the strange lights that appeared on camera the night of Feb. 16 at the home of Mississippi residents Rainer and Edith Shattles?

The Shattles enjoy looking at wildlife on their 150-acre property in Jackson County's Cumbest Bluff. For that purpose, they installed trail cameras to record and playback any nocturnal animal activity. But on this night in particular, their cameras caught something they'd never seen before.

"We have unusual things around here that happen, but it's usually associated with our grandchildren. But this case, we didn't know what it was," Edith Shattles told WLOX News.

WLOX described the scenario as it unfolded on the deer cam:

The time of the pictures is clear. At 7:24 p.m., deer appear and all is normal. At 7:29, a dim light appears. At 7:35, it gets brighter. Then at 7:53, a weird shape appears on the camera. The deer are lit up brightly, but how? The cameras are infrared and don't emit light. At 7:56, another sharper light appears, then it gets much closer, seemingly focused on the deer. It looks like headlights, but well off the ground and there is no road. It then flies away.

The trail cam captured this image of the bright, glowing eyes of one of the visiting deer: 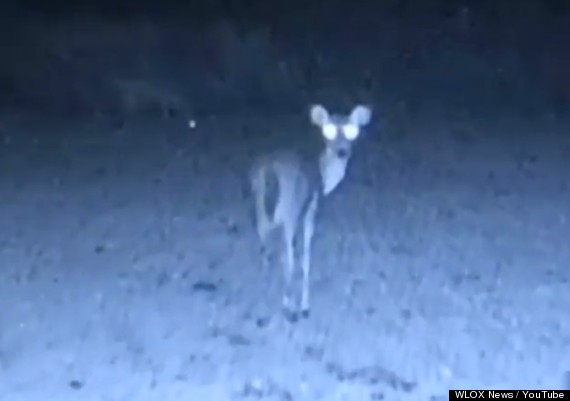 "The more we looked at it, the more we realized that it was something that was in the air, it was something that I had never seen before," Rainer Shattles told WLOX. "Well, if it's alien, I'm not sure about that. But it's definitely a UFO. Now, whether it's a government drone or what, I wish, if nothing else, one of them would step up and say, 'Yes, that's ours.'"

So, if it wasn't aliens out enjoying their own love of local Mississippi fauna that night, what did the Shattles' deer cam record?

"Sorry, but the 'UFO' is just a tall pick-up truck with spot lights on the roll bar. A very common thing in the rural South ... Some guys were out that night looking to poach some deer. ... Spotlighting deer is illegal so nobody is going to come forward. Show that photo to a game warden and he'll know exactly what it is."

While the above explanation points to a pick-up truck as the culprit behind the UFO images, "there were apparently no tyre (sic) marks in the field and there is no road nearby," reports the Daily Star.

Another OpenMinds.tv commenter, Stephanie, gives a different take on the mystery lights:

"I work in animation and special effects, and I'm a big photo geek. I've watched carefully the photos of these supposed UFO lights. It seems to me that these lights are actually the reflections of the deer's eyes in the lens of the camera. You can see this aberration in many photos and films where the bright lights produce and mirrored ghost picture in the lens. The light projected on the deer and the ground, to me, is just the flash of the other infrared camera. As much as I believe in UFOs, I think this case is only a misinterpretation of lens flares and reflections."

HuffPost would love to hear what you think is the most likely explanation for this UFO report. Share your comments below.