The ongoing brouhaha between the Republican governor of Mississippi and the Republican insurance commissioner over Obamacare offers some insight into the difficult position states, and especially GOP elected officials, are in when it comes to health care reform.

Both Gov. Phil Bryant and Insurance Commissioner Mike Chaney are outspoken opponents of President Barack Obama's 2010 health care law. But the two men have been unable to resolve a months-long dispute about whether the state should get involved in carrying out Obamacare or let the federal government step in and run a big chunk of Mississippi's health insurance market. Their standoff is holding up the Obama administration's decision on what happens next.

Chaney maintains that Mississippi would be better off if state authorities were to establish and manage a health insurance exchange under the law, which residents would use to comparison shop for health plans and learn whether they qualify for financial assistance. Bryant sees state control as an illusion and would just as soon let Obama do the work to implement his own health care law.

The Washington Times summed up the tight spot facing Republican state officials like this:

On the state-level insurance exchanges, states can resist federal intrusion by running their own state-controlled markets, or they can thumb their nose at Mr. Obama's law by letting his administration run the system by itself and then have to take all the blame if it turns out as badly as many of the law's critics predict it will.

Mississippi Attorney General Jim Hood appears to have sided with Chaney, according to the Clarion-Ledger of Jackson, Miss. Bryant hasn't spoken up yet, the paper reported Tuesday.

Republican governors in Idaho, Nevada, New Mexico and Utah each made a case similar to Chaney's: That Obamacare is bad but state control can make it better.

If Chaney gets his way, Mississippi would be the fifth Republican-led state with its own health insurance exchange. Chaney actually submitted a plan for a health insurance exchange to the Department of Health and Human Services in November. But Bryant fired off a missive of his own questioning the insurance commissioner's authority, which prompted the Obama administration to postpone a determination.

The Mississippi disagreement has its roots in the debate among congressional Democrats over the health care law in 2009 and 2010. The House passed a bill that would have created a single national health insurance exchange while the Senate favored state-based exchanges with federal fallbacks for states that wouldn't or couldn't run their own. The Senate won this argument.

The Senate's approach was both a nod to federalism and an attempt to give state officials -- even those opposed to Obamacare -- a stake in the success of health care reform. Congress anticipated that states would prefer to exercise some measure of control over the new health insurance markets being shaped by the federal health care law.

That turned out to be a miscalculation: 25 states decided to defer to the federal government. Twenty-two of them have Republican governors. Just four GOP-led states are among the 17 states and the District of Columbia that requested and received conditional federal approval to establish health insurance exchanges. 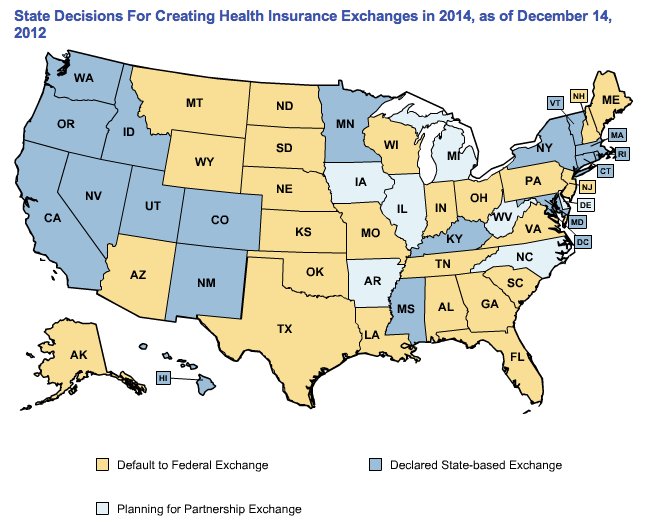