JACKSON, Miss. -- To drive down Ellis Avenue, just off the interstate, is to visit a paradise of easy money. Along a four-block drag of fast food joints and half-empty strip malls, the payday lenders are packed in tight. The names on their fluorescent signs melt into one another: Paycheck Loans, Advance America Cash Advance, Speedee Cash, Payroll Advance, Cash Flash, Cash Depot, Cash Connection, E-Z Check.

Mississippi, the poorest state in the nation, has more payday lenders per capita than anywhere else in America, and people there have less access to traditional banks than in any other state. But an innovative partnership between the Mississippi Center for Justice, banks and employers is helping to give the state's residents access to responsible small-dollar loans, as well as free financial education and a new way to start building savings and credit.

Dubbed the New Roots Credit Partnership, the center's program pairs community banks willing to provide financial literacy education and small loans with employers who are willing to offer this education to their employees. Now, two years after the program launched in 2013, it is growing slowly.

Across the globe, the small-dollar loans known as microcredit have transformed poor communities by providing entrepreneurs with start-up capital, often as little as $50, to fund small businesses that generate income. The Grameen Bank in Bangladesh, a microlender, was honored with the Nobel Peace Prize in 2006, and small loans have been touted as a breakthrough tactic in the fight against global poverty.

So far, the New Roots Credit Partnership has signed up the cities of Jackson and Canton, as well as a school district in the Delta and a regional housing authority. "It's a win-win-win," said Charles Lee, director of consumer protection at the Mississippi Center for Justice, during an interview at the group's Jackson headquarters. "Participants get the loans they need, as well as financial literacy training; the bank gets new customers; and the employers cut down on the number of garnishments they have to process each month, while providing their workers with an important benefit."

For employees, the benefits of a program like this are both short-term, in the form of a loan, and longer-term, through the free savings account and the financial literacy education. "I think the first time I went into a payday loan was, I had a light bill that was due," said Shawana Pierce, a bus driver for Head Start, in a New Roots Credit Partnership video. "Growing up, we did not have discussions about credit, or managing your money, or anything like that. Prior to the program, I did not have a checking account, and taking care of the bills pretty much meant paying cash or getting a money order," Pierce said. "I really don't know where I'd be at this point if I had not come across the program. I'd probably still be spinning my wheels somewhere, going through the same cycles."

For banks, the New Roots Credit Partnership helps them connect with a big pool of potential new customers. And while it's difficult to turn a profit on small-dollar loans with low interest rates, the benefits for BankPlus are broader than that. "The straight income from the accounts doesn't generate a lot of income, but if you look at the long-term benefits, and the relationships we're building with people, the program is certainly a net positive for the bank," said Jack Webb, who heads retail banking at BankPlus, one of the banks participating in New Roots.

For employers, the credit partnership helps them address a number of issues that affect their bottom lines. "Employers realized they shared a common problem, that they had employees who couldn't live without having to come for them for advances on the next week's paycheck," said David Johnson, head of community development at BankPlus. "Additionally, many of the employers were receiving garnishments they had to process from lots of different parties, which creates a payroll nightmare. And thirdly, those employees who were under major financial stress are more likely to be distracted at work and need more time off to deal with emergencies."

Lee at the Center for Justice said it's important to correct the public perception that the only people who need quick cash loans are the very poor or those without steady paychecks. "Lots of people who get paid once a month, like teachers and firefighters, find that there's a gap, a few days at the end of the month when last month's pay is gone, and they need a bridge loan until their next paycheck. That's an easy way to get trapped in the short-term debt cycle."

Credit alternatives like New Roots can't come soon enough for places like Jackson. Over the past five years, the Republican-controlled Mississippi state legislature has defeated a number of reform efforts designed to rein in the payday lending industry, most notably a far-reaching package of reform bills in 2011 that would have effectively banned payday lending in the state by capping allowable interest rates and fees. Payday loans are currently banned in 14 states and the District of Columbia. But in Mississippi, as in the rest of the nation, the payday lending industry has spent millions of dollars lobbying to protect its interests.

Chief among these are the startlingly high interest rates and myriad fees that can make payday lending significantly more profitable than traditional consumer banking. On a recent visit to an EZ Check Corp. storefront in Northeast Jackson, the highest posted annual percentage rate was 572.30 percent. Fees were 20 percent of the loan amount. 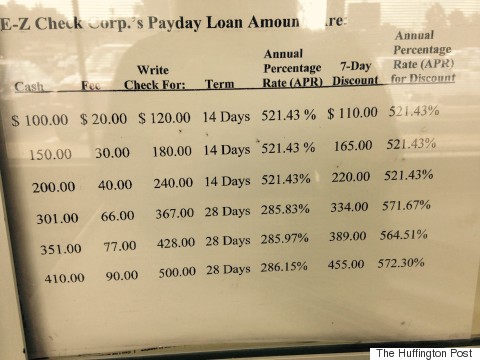 Yet for the tens of thousands of adults in Mississippi who don't have a bank account, a situation known as being "unbanked," check cashing and payday loans are often the only financial services they've ever used. Hundreds of thousands more people in the state are "underbanked," meaning they may have bank accounts, but they still rely on payday loans, check cashing services, pawn shops and money orders to meet their everyday financial needs. According to the FDIC, in 2014 nearly half of all Mississippi residents, 47 percent, were either unbanked or underbanked.

"The harms that payday lending causes in a place like Mississippi are very specific harms, to a population that's already vulnerable on a number of fronts," said Whitney Barkley, policy counsel at the nonprofit Center for Responsible Lending. "These folks are low-income, and in Mississippi more than half of the people who take out these loans are single women head of households. When the loans get out of control, then the garnishments set in, and all of a sudden there's no money for utilities, say, or for rent or mortgage payments." As the debts spiral, Barkley said, "there are fewer and fewer alternatives to bankruptcy."

At the heart of the New Roots Credit Partnership are two Mississippi-based banks, BankPlus and the Hope Community Credit Union, which provide their own small-loan programs for borrowers who lack access to traditional credit. Both programs place half the total loan amount into a free savings account, with the other half kept on hold, and accessible only after the entire loan has been paid back. Borrowers have up to two years to pay back the BankPlus loan, as opposed to two weeks, the traditional terms for a payday loan. BankPlus charges 5 percent interest for loans of either $500 or $1,000, and no fees.

Helping people to overcome reservations they have about banking is key to combating the cycle of easy credit and runaway debt. "These are people who aren't familiar with banking, it hasn't been a family tradition with them, so the idea of coming into a business institution and turning over their money to us and writing checks, that's a foreign idea for them," said Webb, the chief retail banking officer at BankPlus. "They like the cash in their hand and they spend it that way."

When it started, the New Roots program built on these existing small loans by connecting the banks with employers, including the city of Jackson, interested in offering the financial literacy classes as a free benefit to their employees. Since 2013, BankPlus has run more than 50 of the three-hour classes for different groups, teaching participants the basics of credit, how to create a household budget and how to save money.

"One of the surprises to me is how many people don't keep track of their balances, and don't know what's in their accounts," said Marcia Reed, a manager at BankPlus who has taught more than 200 classes. "And lots of people don't know how to apply for a loan, or what the bank is looking for, so they go in and they get turned down, and they have no idea why."

Employer-based small-dollar loans aren't unique to Mississippi. Similar programs are at work in communities across the country, and the FDIC has been pilot testing small dollar loan programs at local banks since at least 2010. But in Mississippi, with its huge numbers of underbanked adults and its political resistance to regulating fees and interest rates, these small loans could provide thousands of people with a crucial alternative to a crushing cycle of debt.

"Anything we can do to move people into mainstream banking system is going to create greater financial stability throughout families and communities," said Barkley at the Center for Responsible Lending. "The New Roots program is great because it establishes better borrowing habits, but it also creates a savings account that people can fall back on in their next financial emergency. This is going to benefit the account holder, of course, but it's also modeling really good behavior for their children and for future generations."