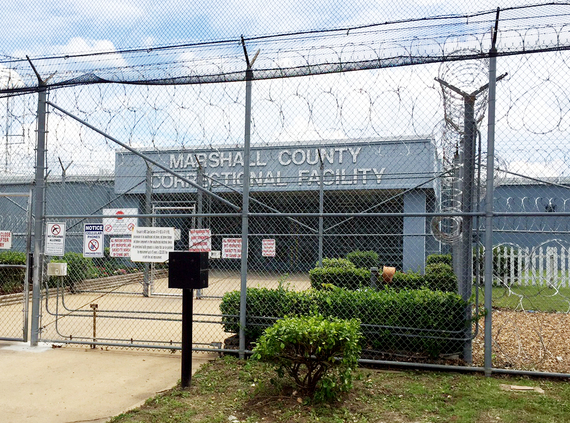 Upon entering the Marshall County Correctional Facility just outside Holly Springs, Mississippi, visitors were scanned, patted down and led through several locked doors to the gym.

Inside, inmates wearing white and black striped pants with "MDOC Corrections" written on the back in block letters waited inside the building that featured icons of sports teams on the walls, from the Chicago Bulls to the Miami Heat.

Two barber chairs were positioned on the floor of the basketball court. A sign on the wall read: "It's simple. Learn from yesterday. Live in today. Hope for tomorrow."

Fans blew in the warm room as inmates, wearing headset microphones, performed pieces they had written in a fictional barber shop setting. With passion, authenticity and conviction, each delivered a performance that could rival professional actors.

Many recited lengthy monologues and spoken word poetry they had written about a variety of topics, including gang violence and racism, wearing no costumes, only state issued Mississippi Department of Corrections clothing.

Imprisoned philosophers shared their creativity and thoughts about the world from their individual perspectives.

"How could he run if he's got shackles on his feet? Why would anyone want to run a race like that," said one.

"Personally, I'm my own worst enemy. To myself, I had to learn to be friendly," said another.

"No matter where I am, I am the determining factor of my success," another spoke.

"Revolutions in small rooms make big things possible," he said following the performances. "It's an adaption of a quote. This has been a revolution. I know I've given those guys something. They have transformed me.

In a classroom after the event, a quote on the wall read: "Exceptional people are dedicated to empowering those in their path with wisdom, knowledge, ability and zeal to excel above and beyond all expectations of others."

"I wanted to look at education and the importance of it in every aspect of our society," he said. "It doesn't just happen in schools."

Hughes said he was interested in learning if more education and programs, such as the Prison Writes Initiative, could result in less recidivism in the prison system.

According to some of the latest statistics released by the U.S. Department of Justice in 2015, Mississippi held 3,200 fewer prison inmates at the end of 2014 (down 15 percent from 2013) as a result of new policies that encourage supervision of nonviolent offenders in the community instead of in prison.

The states with the highest imprisonment rate per capita among persons 18 or older were Louisiana, Oklahoma, Alabama, Texas and Mississippi with 788 per 100,000 people imprisoned. Maine imprisoned the fewest state residents per capita, followed by Massachusetts, at the end of 2014.

Fifty percent (95,800) of sentenced inmates in federal prison in September of 2014 (the most recent date for which federal offense data was available in this report) were serving time for drug offenses. The same was true for 53 percent in state prisons. Violent offenders represented 7 percent of the federal prison population (14,000 prisoners.)

The inmates names could not be published, but one who participated in the Prison Writes Initiative said he was currently working on his GED.

Those who completed the Prison Writes class were given certificates after the program. Thursday's class was the first class in the Mississippi prison system to graduate in the theatrical arts, Bourgeois said.

"Essentially, they had to write their own scripts during the semester and perform them in the end," he said. "They also studied a great deal about the history of theater throughout the term."

Bourgeois said they'll start the program again at the three prisons in the fall. They are also trying to secure funding to implement classes in the Leakesville prison.

"We are mostly funding this ourselves and could use help from the community," he said.

Bourgeois said the program is a non-profit, and all donations are tax deductible. To learn more, visit www.voxpress.org.

Another version of this story first appeared in The Oxford EAGLE.