As part of a delegation of Mississippi workers, clergy and students, I am here in South Africa to make a historic request for aid and assistance. There is some irony in the fact that during the 1970s and 1980s, it was Americans who mobilized and organized to pressure the racist South African regime to abandon Apartheid. Now there is a turnabout, with respect to the right to engage in union organizing activity -- the workers of South Africa have more freedom than the workers of Mississippi. We have come to ask for help from the South African auto union that represents Nissan's production facilities and dealerships, because while Nissan is happy to cooperate with unions here -- as well in its home country of Japan -- the company is waging a fierce campaign of threats and intimidation in Canton, Mississippi. 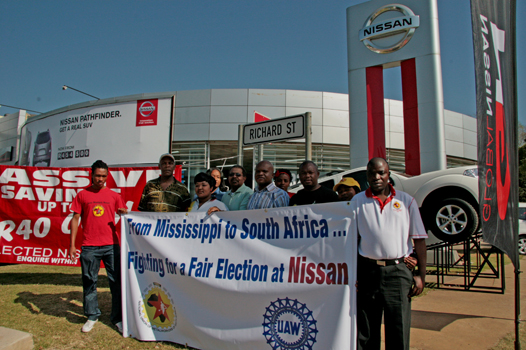 The United Auto Workers (UAW) were in the forefront of the anti-Apartheid movement, and there is a special bond between the UAW and the National Union of Metalworkers of South Africa (NUMSA). Just as the UAW poured its moral and political muscle into battling on behalf of South African workers, now the South African unions are offering to use their moral authority and political power to help the workers who seek to join the UAW.

Canton, Miss., is located near the center of the civil rights movement of the 1960s; near the site of the murders of Medgar Evars, James Chaney, Andrew Goodman, and Michael Schwerner. Civil rights, human dignity and the struggle for freedom are in the air and in the water and in the dreams of every man, woman and child in Canton. Canton is now at the heart of the struggle for economic justice and the American dream. 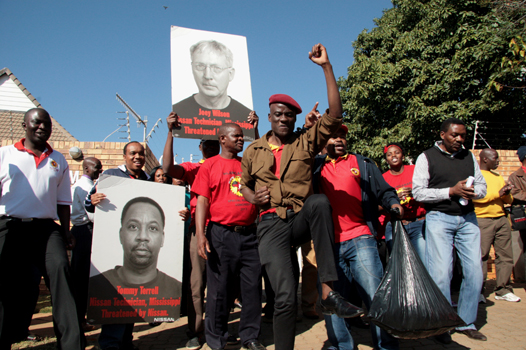 Just over a decade ago, Nissan opened a plant in Canton. Taxpayers offered the company hundreds of millions of dollars in incentives in return for what they believed would be good, full-time jobs. While the people are supportive of Nissan and in general, don't opposed taxpayer subsidies if it means good jobs, many of these stable middle-class jobs did not materialize, and Nissan is instead relying on a large pool of temporary labor to do its production work. These jobs are not the solid middle-class jobs the community needs; the temporary workers receive just a couple of dollars over minimum wage, have few benefits and no job security. The company lets go of these workers at will, all the while pretending that it has never had a lay-off.

There are other issues as well such as safety. Injured workers risk losing their jobs. Pay scales and benefits in the largely African-American Mississippi plant are lower than those in Nissan's Tennessee facility, although the cost of living is the same. In the past couple of years, a number of workers reached out to the UAW for assistance in forming a union, so they could have a voice and a seat at the table to address these concerns. Hundreds of workers came on board and joined a committee to ask Nissan to conduct a fair union election.

Nissan and its Alliance partner Renault, bargain with unions in Japan, Britain, Australia, Spain, Brazil, France and South Africa -- even in China and Mexico. But when Mississippi workers began to organize a union, Nissan cracked down with implied threats that they would pack up and move if American workers dared to seek the same rights as other workers. Management meetings and interrogations created an atmosphere of fear and intimidation. The company refused to consider the demand for a fair election, essentially saying that unions are fine everywhere but in the United States. 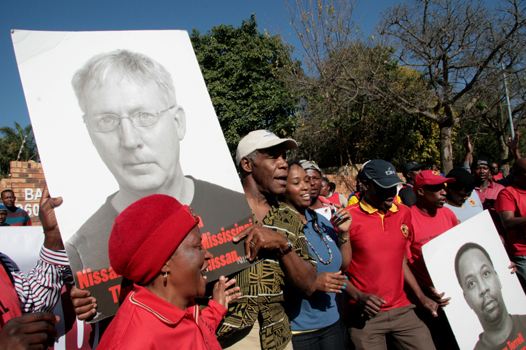 Community leaders in Canton rose up to speak up on behalf of worker rights. After all, as Rev. Dr. Martin Luther King, Jr. knew, worker rights are civil rights. The Mississippi Alliance for Fairness at Nissan (MAFFAN) is headed by the president of the Mississippi Baptist Convention, a network of 300 Mississippi churches, and includes the president of the state NAACP, as well as many other civil rights and church leaders and political officials. Student activists from historically black colleges are mobilizing as the Mississippi Student Justice Association (MSJA).

Now, the Mississippi workers are reaching out to their sister union in South Africa. Here, the company respects the right of workers to have union representation. Here, workers have a voice in restricting use of temporary workers. Here, workers are not afraid to speak up about safety concerns. Here, with a union, Nissan workers have dignity and respect.

Now, we in the United States are turning to our colleagues in South Africa for their support and guidance. We are no longer a shining example of democracy. We are no longer a standard bearer of middle class society. The rich are gaining more wealth and power while working people are losing ground and losing hope because the right to have a union is suppressed.

I am committed for as long as it takes to join in this struggle for the right of Nissan workers in the United States to have a union. As long as powerful corporations such as Nissan can use fear and threats to keep workers weak and without a voice, we will not be a land of opportunity for all. With the help of our more powerful brothers and sisters in South Africa, we will not let that happen.