On Monday evening a crowd of more than a thousand Mississippians gathered in front of the Governor's Mansion for a rally urging the state's Republican governor, Phil Bryant, to veto the so-called "Protecting Freedom of Conscience from Government Discrimination" bill. 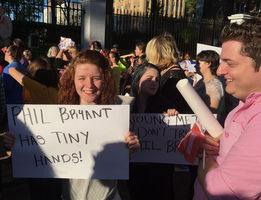 The prize for best sign had to go to the one pictured above. 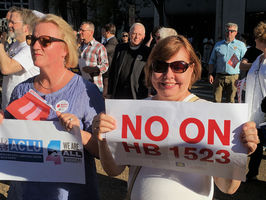 Like similar bills passed recently in North Carolina and Georgia, this legislation has nothing to do with protecting religious freedom. Rather, it would legalize discrimination against people, and not only LGBT people. It would allow discrimination based on religious or moral beliefs against people who have had premarital or extramarital sex, are divorced, are having sex with more than one partner, are transgender, are having homosexual sex . . . 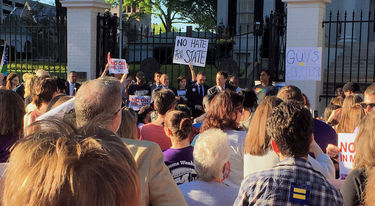 If signed into law by the governor, House Bill 1523, which has been accurately called "the most sweeping anti-LGBT in the nation," will secure Mississippi's place as the leader in bigotry in the nation.

Bryant is facing pressure from national and international businesses that operate in the state to veto the bill. Such pressure led Republican Governor Nathan Deal to veto a similar bill in Georgia, so there is some small hope that Mississippi might not yet again go down the road of enacting plainly unconstitutional legislation and wasting the taxpayers' money fighting a losing battle in the courts. But few at the rally were optimistic that the governor would do the right and sensible thing.